Posted on November 7, 2013 by Webmaster ANPS

On a crisp sunny fall morning seven hearty souls gathered on the Capitol steps to begin a most interesting tour, an Arkansas Native Plant Society  (ANPS) field trip, of the trees adorning the campus of the State Capitol grounds. Our leader, former ANPS President Eric Sundell, led us in a clockwise direction, with the handy brochure “A Walk On The Hill” in hand; it is itself a self-guided tour of the grounds, documented by Steve Burgess, a former student of Eric’s who had done brilliant work, Eric said. 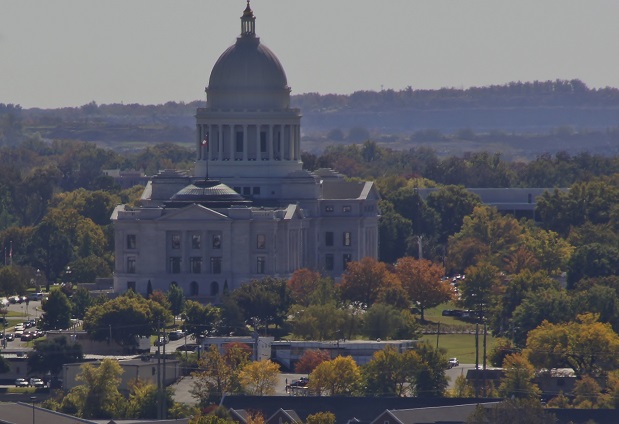 As we stood admiring the beauty of the campus, and the efforts already made by generations past to provide us the variety and diversity of trees, we also wondered why the flags were flying at half-mast—still an unsolved mystery.

We identified more than 30 of the 40 plus trees listed in the brochure. Eric’s enthusiasm for the native trees of Arkansas represented here was contagious. I loved all the additional information provided from his prodigious store of knowledge.  The Japanese magnolia (Magnolia soulangeana) was the first encounter. One of the trees along the row demonstrated Eric’s explanation of its confused hormonal signals and was showing its blooms in the fall.

Then, we passed the huge willow oak, native to Arkansas, the Shumard oak, and the southern magnolia; the tulip tree, Liriodendron tulipifera—one of only two species of tulip tree worldwide, the other in China—common in the Southeast but, as a native in Arkansas, occurring only on Crowley’s Ridge; and the pines, the slash pine and the loblolly pine.

We were on our way to the Kentucky coffee trees at the rotunda, and next to the busy Iris Society people who were digging up irises.  Eric pointed out the male and female trees, and told tales of how an ANPS member grew her own Kentucky coffee tree from one of the seeds from this site.

The many oaks were viewed: bur oak, post oak, water oak (look up at the crown to spot the identifying leaves), the cherrybark oak, and the sawtooth oak, among others.

Our Arkansas native basswood and the native red mulberry were on our path. But perhaps the most important trees to view were the ginkgo and the dawn redwood (Metasequoia) for their age and novelty; and maybe the two tiny baby kittens hidden in the hollow trunk of the red mulberry!

I think we had a sense of satisfaction with the harmonious tree-bedecked pathways, and the beautiful fall morning, and I certainly appreciated all the information about God’s wonders, the trees, imparted by our leader Eric Sundell.

Webmaster Notes:
Flag mystery solved:  Ex-House Speaker Tom Foley dies at 84
Kittens were not to be found  by the Capitol groundskeepers the next week.