Posted on December 2, 2013 by Webmaster ANPS

The footpath to the waterfall at Rosa Hole was only about 100 yards long, but it made for a short, sweet, and rich Sunday morning outing for Arkansas Native Plant Society members during the fall meeting in Mountain View. 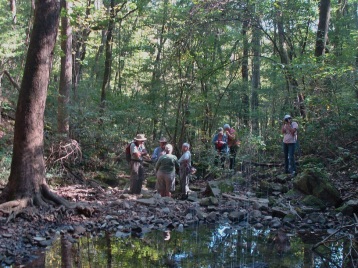 Sapling basswood trees and numerous bladdernuts and spicebush shrubs grew under a high canopy of bitternut hickory, American elm, sweetgum, and black walnut. None of the bladdernuts bore fruit—those wonderful, airtight, balloon-like seed capsules designed for water dispersal—but a few of the spicebushes still had their berry-like stone fruits. (And it’s always startling that something so small can be so red.) We admired the slender, distinctively yellow, terminal buds of the smaller bitternut hickories and compared leaf venation in basswood and red mulberry, good field characters to tell the two trees apart, with their similar cordate, serrate leaves.

The waterfall was a high one—our estimates ran between 60 and 75 feet—and scarcely dripping after the late summer drought. 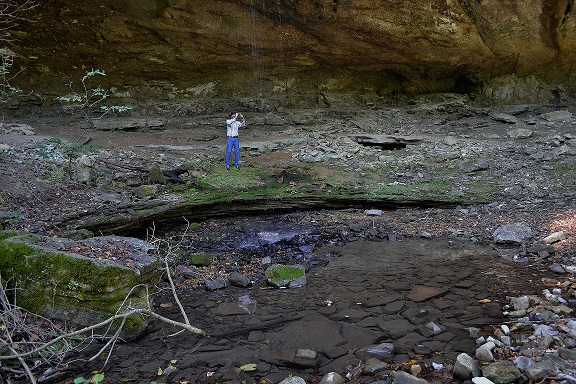 Below the pool in the runoff stream were several rocks covered with a thin coat of bright green thallose liverworts—the term ‘thallus’ is botanical shorthand for a plant body so simple that it lacks roots, stems, and leaves. Thallose liverworts are considered to be the world’s simplest land plants. (If there was ever terrestrial life on Mars, it was probably a thallose liverwort.)

On the walk from the parking area to the foot path we passed an impressive thicket of roughleaf dogwood trees, Cornus drummondii, with masses of white berries. Roughleaf is one of only two species of Arkansas dogwoods with white fruit (the other is gray dogwood, C. racemosa). According to Carl Hunter, who spent most of his professional life at the Arkansas Game and Fish Commission, in his book on Arkansas trees and shrubs, roughleaf dogwood fruits are eaten by over 30 species of birds, including quail and turkey.

The find of the morning was a small grove of Kentucky coffee trees, Gymnocladus dioicus. Gene Ford noticed the large, dark, heavy pod by the roadside or we likely would have overlooked them—or really underlooked them, because the nearly leafless crowns were high overhead, with mostly just a few pods and a few foot-long midribs of the large bipinnate leaves still left to be seen. These are fascinating, spectacular trees that will reach heights of 75 to occasionally 100 feet. (The current Arkansas champion from Randolph Co. is 72 ft. high, and the taller of the two national champions, both from Maryland, is 106 ft. high. The other national champion is shorter but measures more than 5 ft. in diameter.)

The genus Gymnocladus comprises only five species, four in eastern Asia and our single wide-ranging, but nowhere common, species here in eastern North America. Coffee trees were formerly much cultivated for their beauty and interest. As early as 1883, Francis Leroy Harvey could say, in his Forest Trees of Arkansas, “Cultivated in Little Rock for ornament.” Except for a ring of coffee trees rather recently planted at the Supreme Court building on the state Capitol grounds, I have seen no specimens in cultivation in Little Rock.

Coffee tree foliage as well as the raw seeds and surrounding pulp are poisonous, but roasted seeds have been used as a caffeine-free coffee substitute, especially by early settlers to the Midwest. Thomas Nuttall in A Journal of Travels into the Arkansas Territory during the Year 1819 says the seeds, when parched, are agreeable to eat, but as a coffee substitute, are greatly inferior to chicory. Donald Culross Peattie must have brewed himself a modern cup; in his wonderful book, A Natural History of Trees of Eastern and Central North America (1950, 1964), he writes, “The appearance of the beans or seeds, rather than the taste, must have induced the pioneers to roast and brew them to make what can only by imagination and forbearance be called coffee. As soon as the first settlers were able to obtain real coffee they troubled this curious tree for its beans no longer.”