Trout lilies of the Liliaceae (Lily) Family are small, herbaceous, early-spring-blooming perennials.  Preferred sites are deciduous woodlands and along streams in deep moist loamy soil.  Deep-seated corms with fibrous roots produce additional plants a few inches away so that colonies develop, but generally only a few plants bloom.  Plants, depending on whether a flower stem forms, have two leaves (with flower) or one leaf (no flower).  Leaves are lanceolate to ovate and basal, slightly folded with smooth edges.  Fresh leaves have a mottled green, brown and silver coloration (trout-like) on upper surfaces and green under surfaces.  All surfaces of leaves and stem are hairless (glabrous) and upper surfaces appear waxy.  A single lily-type flower blooms for a few days.  Stigmas have three rounded lobes which spread outward.  Flowers are purplish on the outside.  Flattened seed form in a chambered capsule.  Leaves wither quickly after seed-set.  Plant stems may reach ten inches tall.

(Also referred to as “dog-tooth violets” based on a European species (Erythronium dens-canis) which has bulbs shaped like a dog’s canine tooth. In Europe, too, the term “violets” has been applied to spring wildflowers in general.  “Erythronium” from Greek for “red-purple,” the color of flowers of Erythronium dens-canis.)

White Trout Lily (Erythronium albidum) occurs from Texas to South Dakota and from New York southwestward to Alabama.  In Arkansas, found primarily in the highlands of the northwestern half of the state with widely scattered occurrences elsewhere. 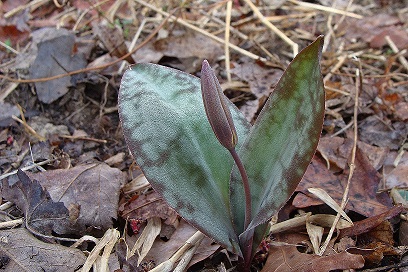 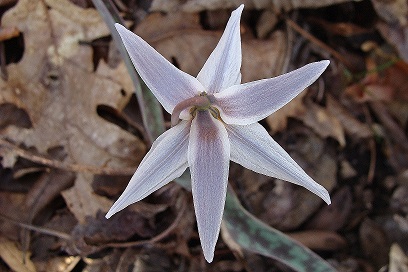 Backside of flower showing nodding form and purplish outside color 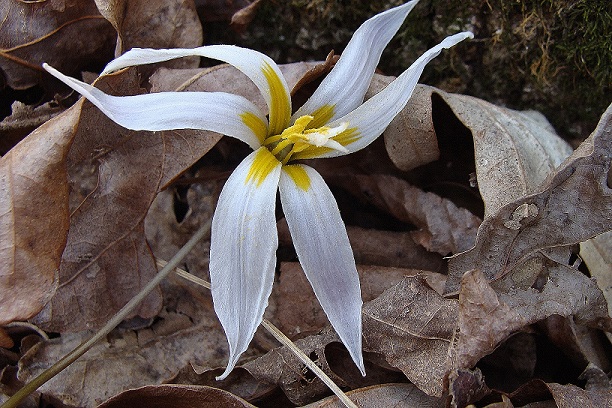 Inside of white trout lily flower (inverted for photo)

Yellow trout lily (Erythronium rostratum)* is less widespread than white trout lily, occurring in some southern and mid-western states.  In Arkansas, primarily in the Ozarks, Arkansas River Valley and Ouachitas.

This plant blooms a week or two later than the white trout lily.  Flowers, with yellow stamens, are presented laterally rather than nodding, and sepals and petals do not recurve.  Flowers and plants are slightly larger than white trout lily.  Seed capsules are held erect and have a beak at the end so that this species is also called “beaked trout lily.”

Yellow trout lily with two leaves and flower bud beside a second plant with one leaf. 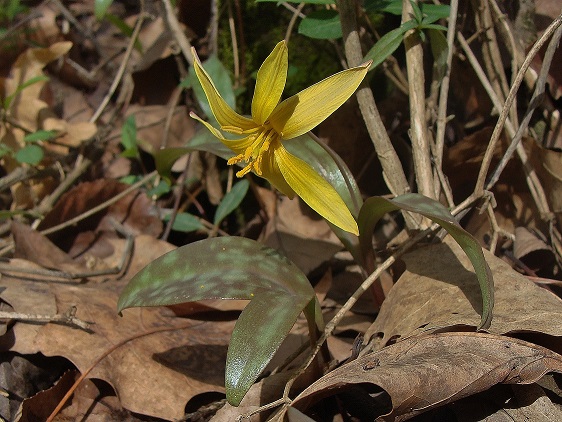 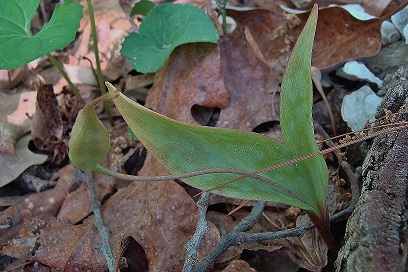 To view a photo of an unusually prolific flowering of E. rostratum see “Neat Plant Alert: Yellow Trout-Lilies at Bell Slough” dated April 24, 2013 at this website.

Article and photos by Sid Vogelpohl