Posted on November 9, 2014 by Webmaster ANPS

Twenty-two species of asters (in the New World genus Symphyotrichum) occur in Arkansas (four other species also formerly treated in the genus Aster are now in the genera Doellingeria, Eurybia and Ionactis).  Asters, in the Asteraceae Family, are herbaceous perennials with white, lavender to purple ray florets.  Aster’s composite flower heads consist of pistillate (and thus seed-producing) ray florets and perfect (meaning bisexual and thus also seed-producing) disk florets, all crowded together on a dome-like center (receptacle).  Showy, strap-shaped corollas (ligules) characterize the ray florets surrounding the center disk.  The irregular (bilaterally symmetrical) ray florets and regular (radially symmetrical) disk florets have lobed corollas fused to form a tube surrounded by bristly structures (pappus).  The ovary is inferior.  As seeds mature, the pappus becomes fluffy and allows the fruits (one-seeded achenes) to be dispersed by wind.

The aster head is surrounded by overlapping bracts (phyllaries) that form a cup-shaped supporting structure, the involucre.  (“Aster” derives from Greek for “star” based on central disk being surrounded by rays.)

Asters are a valuable element of larger native gardens since they provide year-round presence and an important resource for many insect species, including butterflies.  Blooms occur in late fall when few plant species bloom.  Although some aster species may become weedy, the featured species below do not seem to have that issue.

Manyray Aster (Symphyotrichum anomalum, formerly known as Aster anomalus) occurs in the US in Arkansas, Oklahoma, Missouri, Kansas and Illinois.  In Arkansas, the species occurs across the Ozark Plateaus, Arkansas Valley, Ouachita Mountains and highlands of the West Gulf Coastal Plain.  It grows well in shady to partly sunny areas in dry to moist rocky woods and thickets.

A plant may have one to a half-dozen stems.  Stems, as well as leaf blades and petioles, are covered with soft hairs (puberulent).  The upper third of a stem becomes branched in the inflorescence.  Plants, up to four feet tall, have a loose, upright habit but can become splayed with blooming.

Leaf size varies along the main stems. Leaf size on branches supporting flowers is greatly reduced.  Leaves on main stems are ovate to lance-shaped with a heart-shaped (cordate) to rounded base.  Main stem leaves may be 4” long and 1” wide with petioles ¾” long.  Leaves, equally fuzzy on top and lower surfaces, are generally entire, but may have a few coarse teeth.  Main stem leaves are narrowly winged by tissue extending from the leaf blade.  Leaves in the inflorescence are much smaller, sessile and narrowly lance-shaped.

Flower heads, occurring singly on short or long branches, are up to 1” in diameter.  Ray florets, up to 20, have light lavender petals in late summer into fall.   Yellow corollas and stamens of disk florets change to dark pink as flowers fade.  The involucre is round with overlapping (imbricate), pointed, strongly recurved bracts (phyllaries).

Manyray aster blooming in fall. Note involucre with recurved phyllaries and changes of disc floret color from head to head as flowers age. 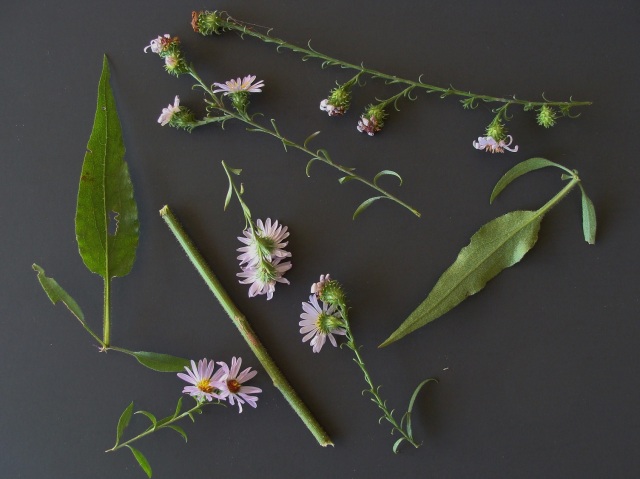 Manyray aster in fall. Hairs on stem and leaves as well as differences between main stem leaves and greatly reduced leaves within inflorescence can be seen.

Late purple aster, also known as spreading aster and clasping aster (Symphyotrichum patens, formerly known as Aster patens) occurs in the US from Texas to Minnesota and eastward to the coast.  In Arkansas, late purple aster occurs throughout the state except for several counties bordering the Mississippi River.  It grows in sandy to rocky open woods, thickets and glade margins.

Late purple aster is an upright plant with slender, hairy, brittle stems that may be two to three feet tall, occasionally taller.  Mature stems are tan, smooth and almost woody in texture.  There can be one to several stems per plant.  Branches within the inflorescence are spindly, long and covered with small, bracteal leaves.  Overall openness of plant’s structure causes the small number of nodding buds/flower heads to be quite noticeable.

Leaf size varies along the main stems and is greatly reduced in inflorescence.  Stem leaves are up to 2¾” long and ½” wide.  Leaves are alternate, clasping, entire and oblong-lanceolate in shape.  Edges of leaves have hairs (ciliate).  Base of clasping stem leaves is heart-shaped (cordate) with round lobes (auriculate) that extend past the stem.  The upper leaf surface feels smooth and lower surface feels slightly rough.  Characteristics of leaves on the flowering branches are very similar to stem leaves but greatly reduced in size.  Leaves along the lower stem are typically dried and brown by the time of flowering.

Flower heads, up to 1” in diameter, bloom from late summer to early fall.  Ray florets, 15 to 18, have lavender corollas.  Lobes and stamens of disk florets are yellow and change to brown as florets fade.  The involucre is elongate with an enlarged base.  Phyllaries are imbricate and tightly pressed against the structure and, thus, indistinct.

Principal characteristics to identify late purple aster at time of bloom are clasping leaves with auriculate lobes, open plant structure with nodding buds/flower heads and phyllaries that are tightly appressed to the involucre.

Late purple aster in bloom. The plant has an open structure that highlights prominent buds/flower heads.

Late purple aster in bloom. Hairs on stem and leaves as well as differences between main stem leaves and leaves within inflorescence can be seen.

Fragrant Aster or Aromatic Aster (Symphyotrichum oblongifolium, formerly known as Aster oblongifolius) occurs in the US throughout the Plains, Mid-West, Interior Highlands and Appalachians.  It is absent from the western states and coastal regions.  In Arkansas, fragrant aster occurs across the Ozark Plateaus and in parts of the Arkansas Valley and Ouachita Mountains.  It grows well in well-drained sandy to rocky soil as well as more moist clay soils in prairies, glades and open woodlands.  It prefers full sun and can tolerate drought.

Plants, which spread readily by underground stems (rhizomes), reach 3’ in height; however, weight of blooming branches causes stems to recline.  Plants have numerous slender, brown, rigid, almost woody stems that may be slightly hairy when young.  At time of bloom, new growth appears from roots and lower portion of stems in preparation for spring.   However, compared to the other two featured species, branches of  the inflorescence are heavily leafed and densely flowered.  At the time of bloom, few leaves remain on stems below the branches.

The leaves are fragrant when crushed.  They are alternate, sessile, narrowly oblong and entire, with pointed tips.  On blooming branches, leaves are up to 1½” long and ½” wide and are stiff with an equally rough texture of upper and lower surfaces.  Leaf size decreases gradually upwards, but appearance remains similar to lower leaves. Near the flowers, leaves about ½” long.

Flower heads, occurring singly on short, closely spaced branches (pedicels), are slightly less than 1” wide.  Ray florets, up to 35, bear dark lavender corollas (many overlapping).  Corollas and stamens of disk florets are yellow and change to dark purple as florets fade.  The involucre is round with imbricate, strongly recurved phyllaries.

Principal characteristics to identify fragrant aster at time of bloom are fragrance of crushed leaves, reclined posture of plant, as well as numerous stems with dense flowers and leaves. 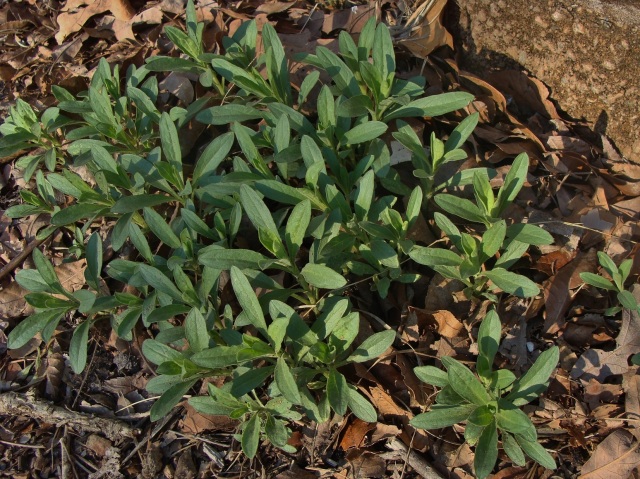 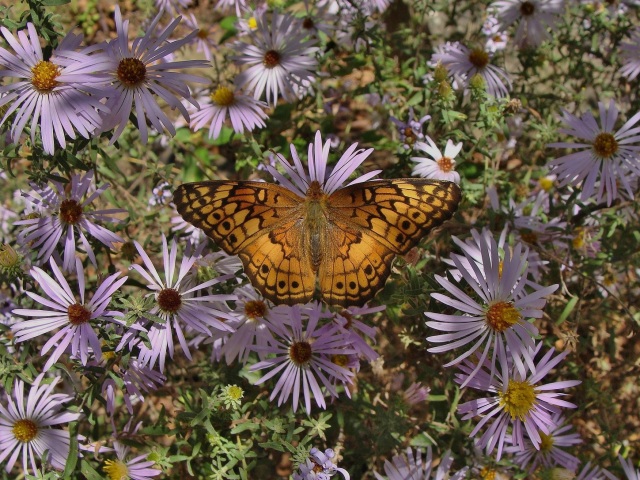 Fragrant aster in bloom with a nectaring variegated fritillary.

Fragrant aster in bloom. Differences between main stem leaves and leaves within inflorescence can be seen. Leaves and flowers are numerous and densely arranged.

1 Response to Know Your Natives – Asters