Brown-eyed Susan (Rudbeckia triloba var. triloba) of the Aster (Asteraceae) family occurs naturally in the U.S. from Texas to Nebraska and Minnesota, then east and south to the borders, as well as apparently introduced in Colorado and Utah.  In Arkansas, this species (the only variety of the species in the state) occurs primarily across the Ozark Plateaus, Arkansas Valley and Ouachita Mountains.  Other common names include thin-leaved coneflower and three-lobed coneflower.  Brown-eyed Susan, a biennial or short lived herbaceous perennial, grows in well-drained moist to wet soils in light shade to full sun within open woodlands, alluvial thickets, roadsides and prairies.  The root system includes several short taproots along with smaller roots.

Brown-eyed Susan has a primary stem that grows to 3 to 5 feet tall.  Plant width (spread) is about half as wide as the plant is tall.  Secondary ascending branches grow from the axils of most primary stem leaves, with lower branches reaching up to two feet in length.  Even with the many flowering branches, when not confined by other vegetation, the plant has an overall open to airy appearance.  Stems and branches, generally a medium green, may have reddish shading, especially when plants are younger.  Stems and branches are densely covered with upright hairs and feel very rough (scabrous).  In deer country, primary stems are eaten early in the growing season so that lower secondary branches become dominant and plants may be only a foot or two tall.

The leaves of brown-eyed Susan are variable.  All leaves are thin but, being covered with short hairs (hirsute), feel thicker and rough.  Hairs of the upper leaf surface are equally spread while on lower surfaces, hairs are concentrated on primary leaf veins.  Leaf margins and petioles have longer hairs.

In winter into spring, the reddish basal leaves vary from simple, long-petioled, and spoon shaped to three- to five-lobed.  In spring, the mounded leaves have three deeply cut, broadly rounded, irregular, finger-shaped lobes with crenulated margins.  With bolting of the primary stem, alternate stem leaves are three-lobed and may be 7 inches long and 4 inches wide, decreasing in size toward the top of the stem.  The lobed leaves at the lower portion of the primary stem transition upwards to unlobed leaves.  In deer country, three-lobed leaves may not be seen on a plant because the primary stem has been eaten. 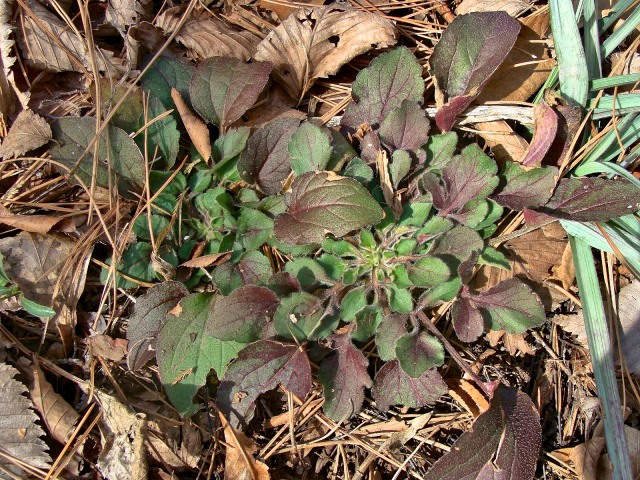 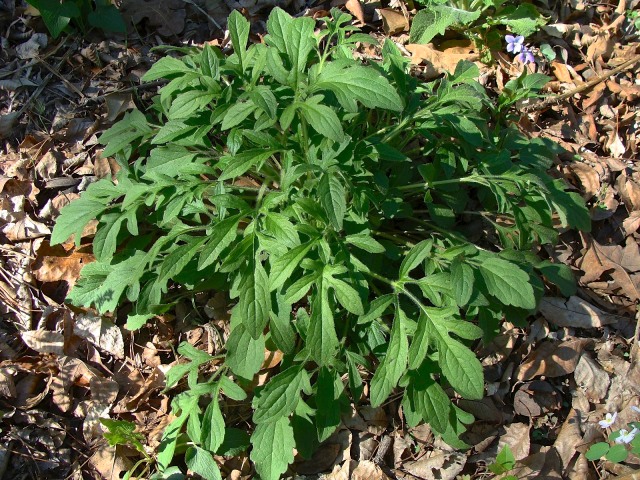 The three-lobed stem leaves have a broadly lanceolate central lobe and lanceolate side lobes that are less than half the size of the central lobe.  Blades of all three lobes taper to elongated tips (attenuate) and have narrowed bases.  The spaces (sinuses) between the three lobes are elongated and rounded at the closed end.  Narrow wings of leaf blade on petioles extend partially or all the way to the stem.  Margins of leaves of these primary stem leaves vary from coarsely serrated to entire, with central lobes having more and coarser serrations.  When leaf-lobe margins are serrated, serrations occur from lobe apices to just below mid-leaf with the lower portion being entire. 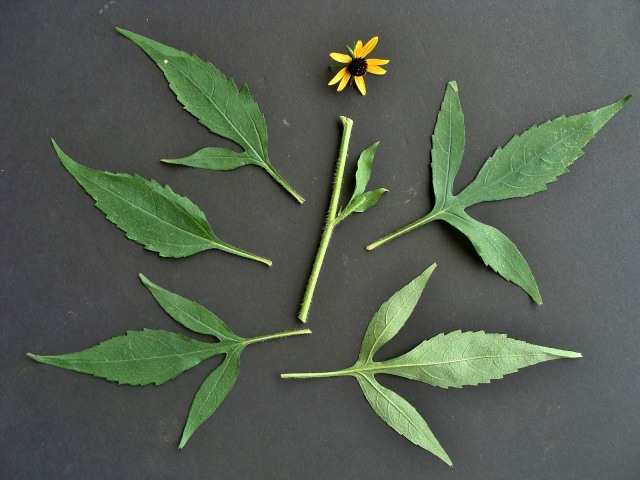 Photo 3:  Leaf and stem display.  Lobes of three-lobed leaves on the primary stem are lanceolate to lanceolate-elliptic.  Simple leaves occur mainly on secondary branches and within inflorescences.  Stems are hirsute.

Flowers, on secondary branches, bloom in mid-summer over a month or more.  Branches may have several sub-branches with one or two flower-heads occurring at the end of each branch or sub-branch.  A plant in an ideal habitat with minimal competition may have hundreds of flower-heads that are evenly spread throughout.  Generally, basal leaves have disappeared by the time that the plant is in bloom. 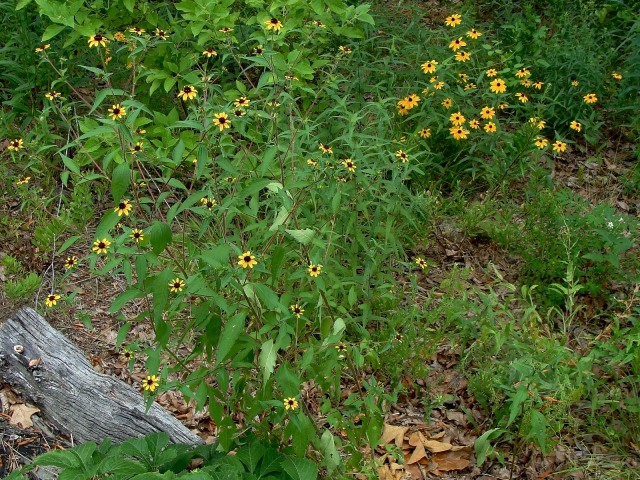 Brown-eyed Susan has composite flower heads, ½ to 1½ inches across, with a purplish-brown central disk composed of many very small florets surrounded by about eight sterile ray florets.  The round central disk has a stubby conical shape on an elongated receptacle.  Disk florets are each subtended, toward the outside of the disk, by a thin, acuminate, receptacular bract (chaff).  These bracts are green at first, but as the purplish-brown disk florets push out, the bracts assume the same color.  Disk florets, about one-eighth-inch long and maturing from the outside of the disk inward, are tubular with five pointed lobes.  Stamens are yellow and the pistil is purplish.  Lobes of the corolla tubes of the disk florets recurve as florets mature.

Ray florets have a yellow strap-like to ovate corolla (ligule) that first appears as a rolled-up tube.  At anthesis, ligules are linear to ovate and may have a notched tip.  Flower-heads bloom across the entire plant without any particular sequence.  Additional smaller heads may appear after the main bloom, if growing conditions remain favorable. 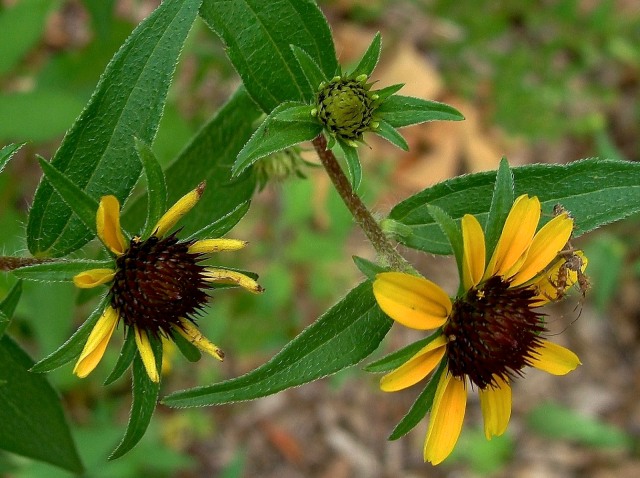 Photo 5:  Note stage of ray-flower development shown by the three heads.  Leaves in inflorescence are simple, hairy, sessile and lanceolate.

The flower head is based on a receptacle subtended by small lanceolate bracts (phyllaries) that form the involucre.  At anthesis, the bracts align in a single flat layer just below the ligules.  Bracts can vary from about half the length of the ligules to slightly longer than the ligules.  Bracts, the same color as the overall plant, have dense short hairs.  Fruits, about one-eighth-inch long, are dark, elongate, 1-seeded achenes that quickly mature as the seed head dries.  The persistent emptied seed heads at first look spiky due to the chaff which then falls off to reveal the receptacle. 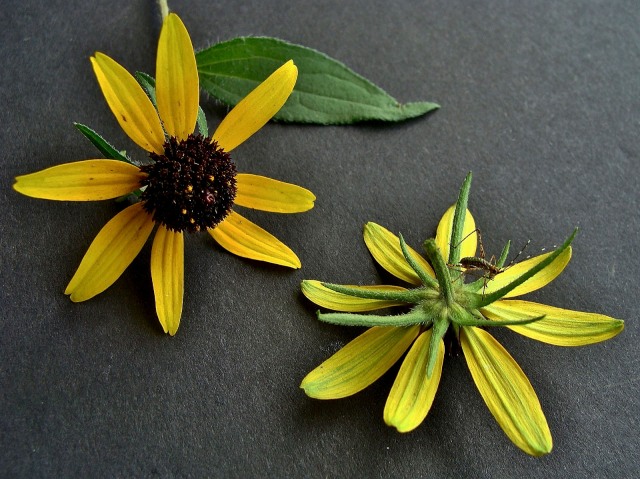 Photo 6:  Disk florets bloom from outside edge toward center.  Involucre is composed of lanceolate bracts in a single layer.

Nine species of Rudbeckia occur in Arkansas, some with multiple varieties. Black-eyed Susan (Rudbeckia hirta), with its common name similar to that of brown-eyed Susan, may cause confusion, because the species’ disks are not quite “brown” or “black”.  Black-eyed Susan has several characteristics that distinguish it from brown-eyed Susan: 1) it prefers drier and sunnier habitats, 2) it is a smaller plant with all unlobed leaves, 3) the upper surface of leaves feels fuzzy, 4) a single flower-head terminates each long secondary stem, and 5) the involucre has several layers of bracts. 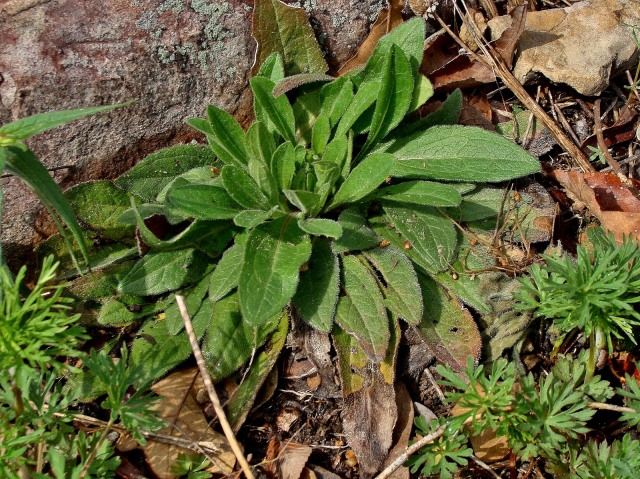 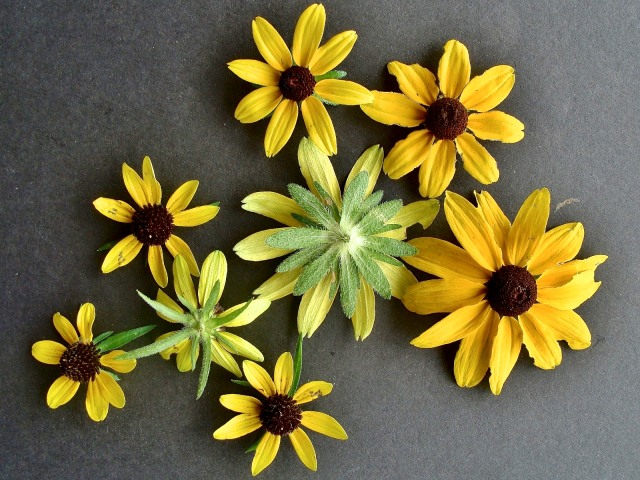 Photo 8:  Four flower-heads of brown-eyed Susan at lower-left and four heads of black-eyed Susan at upper-right.  Texture of central disks differs between species, but color is about the same.  Note difference of involucres.

In a home landscape, brown-eyed Susan would work well in a naturalized setting where its tall lanky growth habit would fit in.  For a more tidy plant, the shorter more compact black-eyed Susan (which typically has flowers for two years) would probably be a better option.  Both species self-seed.