Possumhaw (Ilex decidua) is a deciduous shrub or small tree in the holly (Aquifoliaceae) family that bears showy winter fruit.  In the U.S., it is found throughout the Southeast from central Texas to southeastern Kansas, to southern Illinois, east to Maryland, and thence to the coasts.  The species occurs statewide in Arkansas.  The genus name comes from the classical Latin name and later the specific epithet of holm or holly oak (Quercus ilex) which has evergreen holly-like leaves.  Other common names for possumhaw* include winterberry*, deciduous holly and swamp holly.  Possumhaw, frequently seen in fencerows and in the home landscape, may be found in nature in various moist to dry soils of upland glades, lowlands, and margins of wet areas.  Plants are drought and flood tolerant.

Possumhaw is a multi-stemmed plant reaching 15 or more feet tall.  It continues to add new stems from its root to form tight clumps of stems so that the plant’s base may eventually be 2 to 3 feet across.  Sucker plants may appear a short distance from the original plant.  Possumhaw exhibits “weak apical dominance”; that is, its greatest growth does not arise from tips of branches.  Stems, at first somewhat vertical become arched with age and new stems (adventitious stems) arise from the top of the arch.  These adventitious stems may grow two to six feet in a single growing season and, in future growing seasons, become arched as the growth cycle continues.  Internally and at the perimeter of the plant, the many horizontal to descending branches are relatively fast growing with apical growth of these branches continuing from year to year.  Branches bear slower growing twigs to about eight inches long and very slow growing “spur shoots” up to two inches long.

In earlier years of growth, possumhaw tends to be fast-growing and mostly erect and slender while, with maturity, it develops a broad rounded shape that is widest at its middle, with branches not usually arching completely to the ground, so that its multi-stemmed base is often clearly visible.  Mature stems and branches have thin, smooth, gray bark with splotches of white, along with prominent lenticels (pores).  Twigs have thin gray bark, but spur shoots are roughened by closely spaced leaf and flower scars from previous years’ growth.  With heavy shading, internal branches, twigs, spurs, and even stems die out. 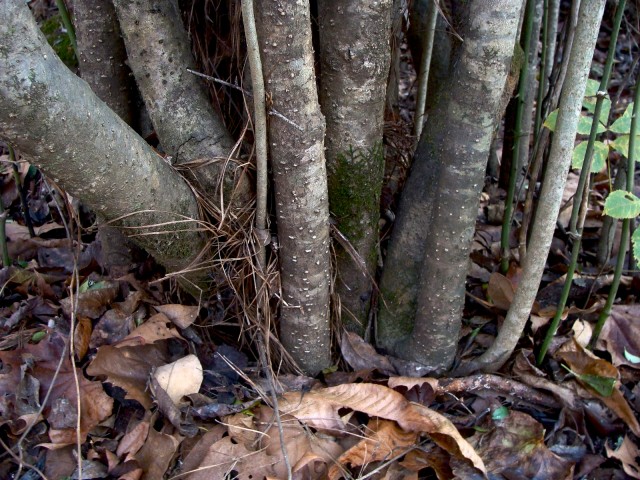 Small, pointed leaf buds produce twigs with simple leaves that are up to 3 inches long and ¾ inch wide with a blunt tip.  Leaves are cuneate (narrowly wedge-shaped) at base and wider in the upper half.  Where sufficiently spaced, leaves are alternate, but those at ends of spur branches are so close together that they appear to be fascicled.  Leaves, glossy green above and a paler green below, have finely crenate margins.  The upper half of a leaf is down-turned.  Veins are pinnate with lateral veins from the mid-vein being off-set.  Leaves are glabrous except for short dense hairs on the principal abaxial veins.  Leaves, falling gradually from fall into winter, do not produce appreciable fall color but are often yellowish.

The inflorescence, developing in early spring, consists of small, solitary flowers or (usually) clusters of two to five or more.  Flowers develop along branches, at the base of branches, along twigs and at tips of spurs.  Typically, each flower grows from a leaf axil, but flowers may also appear without a subtending leaf.  A plant with sufficient sunlight has flowers uniformly spread throughout the plant. 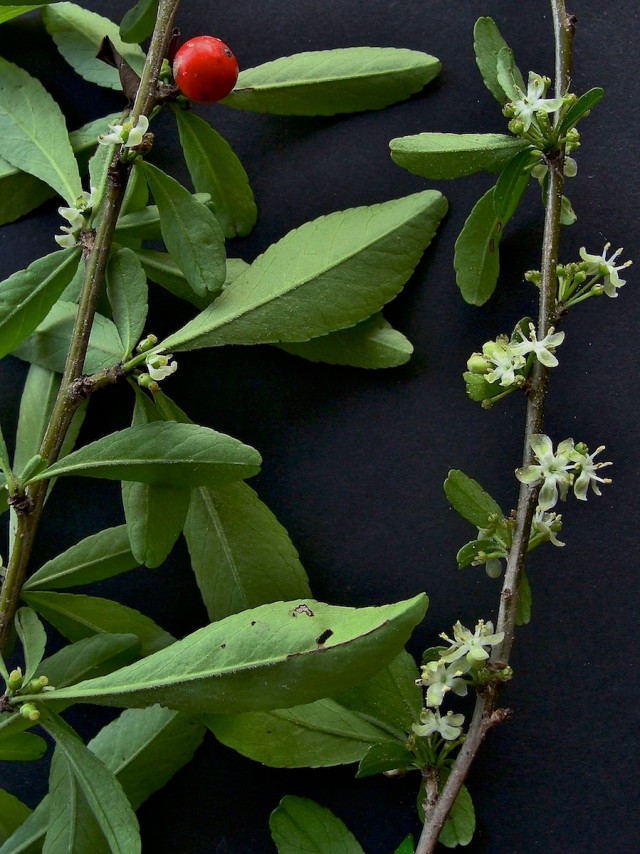 Photo 2:  This mid-April photo shows twigs bearing female (left; note also fruit still remaining from previous season) and male (right) flowers.  These male flowers have five petals, which is not typical (usually there are four).  Spur shoots lengthen a minute amount each year as flowers and leaves grow from the tips.  Note midrib pubescence of leaves on left.

Flowers, ¼-inch in diameter, are on slender pedicels (no peduncles).  Flowers, with tiny cup-like, green calyxes, generally have four (sometimes five) white, rounded petals.  Possumhaw is considered to be dioecious (male and female flowers on different plants), but female flowers may have stamens with infertile anthers.  Round, superior ovaries of the pistillate flowers have round, stubby, flattened stigmas without a noticeable style.  Pedicels, calyxes and ovaries are a smooth light green while the stigma is a yellowish green.  Stamens, anthers and pollen are whitish. 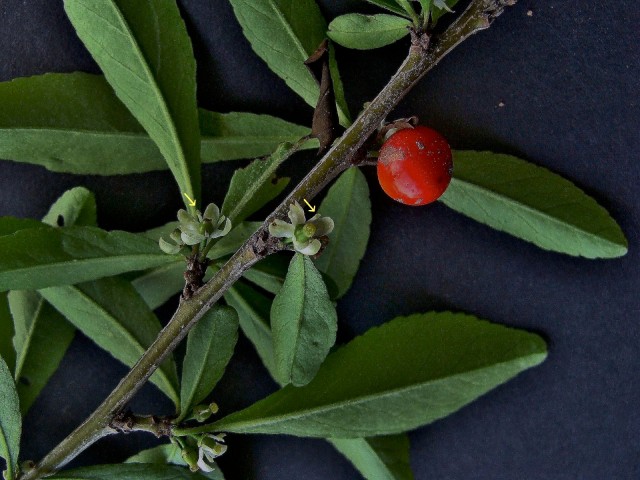 Fertilized flowers produce round, green berries that become 1/3-inch-diameter orange-red to bright red in mid-fall.  Mature berries, persisting from fall into spring (unless eaten by wildlife), are firm with a fairly thick skin that encloses yellow, juicy bitter pulp and four or five light tan, 1-seeded stones that are less than ¼-inch long.  Seeds have the shape of an orange segment with several ridges along its three sides.  Stones are widely dispersed by birds and small mammals. 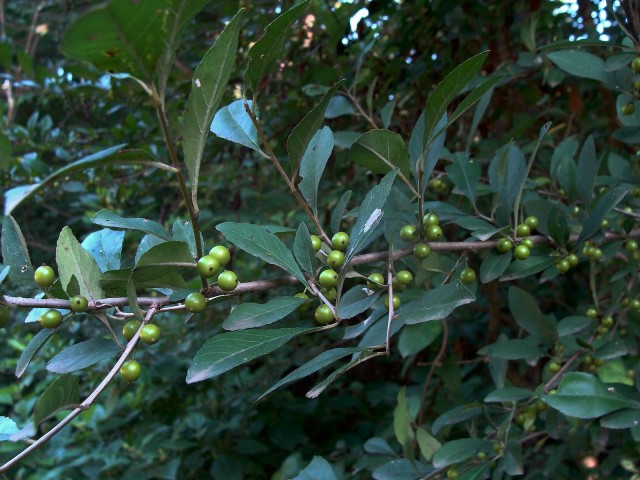 Photo 4:  With sufficient sunlight on individual branches, fast growing current-year twigs may bear fruit on their lower portion.  Photo taken in the mid-July.

In a garden or natural area, possumhaw exhibits interesting structure along with reliable production of brightly colored berries (female plants only).  It is especially striking as a stand-alone specimen in partial to full sun.  Sunnier sites produce fuller plants and heavier fruit crop.  Other than possibly removing some basal stems as they sprout, additional trimming would negatively affect its natural structure.  The berry-like drupes and leaves are not messy.

Photo 6:  Possumhaw’s fruit is further enhanced by snow and ice.  Fruit-bearing shrub at base is corral berry (Symphoricarpos orbiculatus)

In Arkansas, six additional native or naturalized Ilex species have been documented:  Carolina holly (Ilex ambigua), scattered throughout much of the state but not especially common; the non-native Chinese holly (Ilex cornuta); Georgia holly (Ilex longipes), known from the state only in the Ouachita Mountains and considered a species of conservation concern by the Arkansas Natural Heritage Commission; American holly (Ilex opaca), known throughout much of southern, central, and eastern Arkansas; winterberry (Ilex verticillata), known from only a handful of sites in the state and also considered a species of conservation concern; and yaupon (Ilex vomitoria), native in the state originally to the Ouachita Mountains and perhaps the adjacent Coastal Plain, otherwise occasionally escapes from cultivation elsewhere.  Of these, Ilex ambigua, Ilex longipes and Ilex verticillata are deciduous, as is possumhaw.  Ilex ambigua can be distinguished by its dark brown to black, smooth bark (with flaking on old stems), toothed leaves, and elliptical, 1-seeded fruits (drupes).  Ilex longipes looks most similar to possumhaw, and has even been treated as a variety of Ilex decidua in the past.  It has flowers on longer pedicels, leaves lacking the dense hairs on the undersurface veins, and more consistently grows in drier, upland sites.  Ilex verticillata is smaller than possumhaw, typically grows in wet areas, has larger serrated and elliptic leaves that are rugose on the top, and its four or five stones are smaller and not ridged.

This entry was posted in Know Your Natives, Native Plants, Shrubs. Bookmark the permalink.