Yellow leafcup (Smallanthus uvedalius), formerly Polymnia uvedalia, of the Aster (Asteraceae) family is a tall herbaceous perennial with very large petiolate leaves. The genus name honors John Kunkel Small, American botanist and author of Manual of the Southeastern Flora, 1933–still the most recent comprehensive floristic treatment of the Southeast. The specific epithet is from Latin for “stands out”. In the U.S., it is found from central Texas to southeastern Kansas to Michigan to New York, thence southward to the Atlantic and Gulf Coasts. In Arkansas, it is found statewide. Yellow leafcup is the only species of the genus Smallanthus occurring in North America. Other common names include bear’s-foot and hairy leafcup. Its habitat includes moist soils in partially sunny thickets, woodlands and fields.

Photo 1: In this late February photo, new stems arise from a clump of tuberous roots. Previous year’s stem lies on the ground.

Yellow leafcup, when fully mature, routinely reaches 4 to 5 feet tall, but may be up to 10 feet tall. Roots are a tight clump of elongate, irregular fibrous to tuberous roots. The stout, round (terete), erect stems may have a lower-stem diameter of an inch or more. Main stems sparingly develop secondary stems which may be 4+ feet long. The hollow (fistulose) stems bear opposite decussate leaf pairs (rotated 90 degrees from each adjacent pair). Petioles of larger leaves widen at their bases such that stems have “rings” at those nodes. Short, cup-like or two-lobed, leafy cauline appendages (stipules) grow between the opposite petioles on these rings. Moving up-stem, the diameter of the stem noticeably reduces in cross-sectional size from one pair of leaves to the next, in telescoping fashion. Stems have three rounded, longitudinal ridges extending below petioles, but ridges are flattened along lower portions of larger stems. Stems, a light green color, are densely covered with uniformly short pubescence that varies from hirsute (bristly) lower on stems to puberulent (soft) within the inflorescence. Main and secondary stems, along their upper portions, bear floral branches (to 10 inches long) from axils of leaf pairs. In winter, dead stems break off at ground level where they continue to decay into the following year.

Large lower cauline leaves, to 12+ inches long and 8+ inches wide, have two primary lateral lobes and a terminal lobe. These main lobes, ending with broadly tapering tips, have several secondary tips and irregular undulations, but otherwise margins are smooth. Although leaf blade tissue narrows abruptly below the lateral lobes, leaf tissue in the form of jagged “wings” often continues down the sides of the petiole, especially on larger and lower leaves, stopping an inch or so from the stem or extending to the stem. The upper surface of a petiole becomes deeply grooved toward the stem. Upper cauline leaves become smaller and less lobed to unlobed, with a tapered apex and a broad base above a winged petiole. Within the inflorescence, small broad leaves may have five spreading tips and short petioles, further reducing in size up-stem to linear and sessile.

Yellow leafcup produces composite flower heads in mid to late summer that are positioned around the upper perimeter of the plant. Several uppermost cauline leaf pairs of main and secondary stems each produce two acutely-spread, axillary floral branches with or without a central branch. These lateral and central branches, depending on plant maturity and environmental factors, may bear additional opposite linear leaves which, in turn, support further stem division within the inflorescence. The “highest” or most distal cauline leaf pair subtends erect peduncles (stalks of inflorescences) to 1½ inches long that bear several clusters of flower heads on weak pedicels to ¾ inch long. Upper portions of stems/branches, peduncles and pedicles are equally covered with dense, fine pubescence.

Clusters of two to five flower heads occur in equally sized opposite pairs. Along with a terminal cluster, up to six or so lower opposite-branched pairs may occur in corymb-style arrays. Clusters and individual flower heads are subtended by small opposite linear leaves, except the terminal head does not have a subtending leaf. Flower heads and clusters tend to be crowded together. A multi-stemmed mature plant may produce several hundred flower heads.

Photo 4: Display shows a stem (or branch) that originally terminated with a single flower head (at lower center). A pair of floral branches grew from axils of the lower large leaves and another pair grew from axils of small linear leaves within the inflorescence.

The composite flower heads, to 2 inches wide and facing outward or downward, consist of up to a dozen yellow pistillate (fertile pistils but no stamens) ray florets and 50 or so staminate  (fertile stamens and infertile pistils) yellow disk florets based on a 1/4-inch wide receptacle. Elliptic pleated ligules of ray florets (to about 5/8 inch long), pinched at their bases, have two or three stubby apical lobes. Styles of ray florets with bifurcated stigmas are also yellow. Disk florets have flared corollas with five triangular lobes that join to form a stalked, skinny and campanulate (bell shaped) tube. Corollas of disk florets enclose a tube of five purple anthers that produce yellow pollen. The anther tube hides a white style with an undeveloped stigma, so that rudimentary ovules do not develop into seeds. 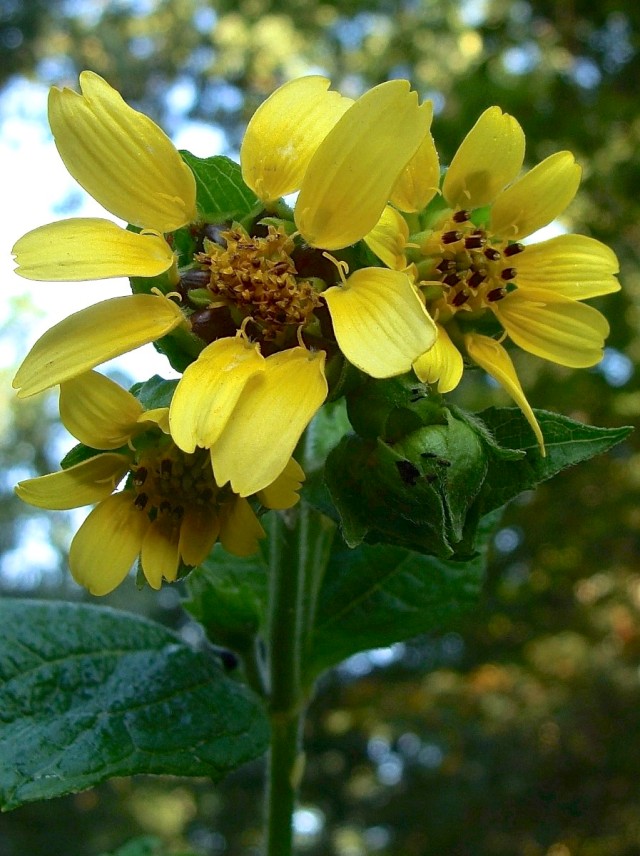 Photo 5: Flower heads shown are at various stages of development: a bud at lower right, heads at anthesis at lower left and upper right and a head with maturing fruit at upper left.

Flower heads have a convex receptacle from which florets and receptacular bracts grow. Each ray floret and disk floret is subtended by a bract positioned away from the center of the flower head. Bracts that subtend ray florets are broadly triangular with acute tips (3/8 inch long and 2/8 wide) and are cupped so that the ovaries and developing fruits are tightly enveloped. Bracts subtending ray florets, also triangular, are smaller and narrower. Four to six leafy, triangular and longitudinally pleated involucral bracts (5/8 inch long and ½ wide), which loosely covered the flower head while in bud, subtend flower heads. The pubescence of receptacular and involucral bracts is not noticeable without magnification. 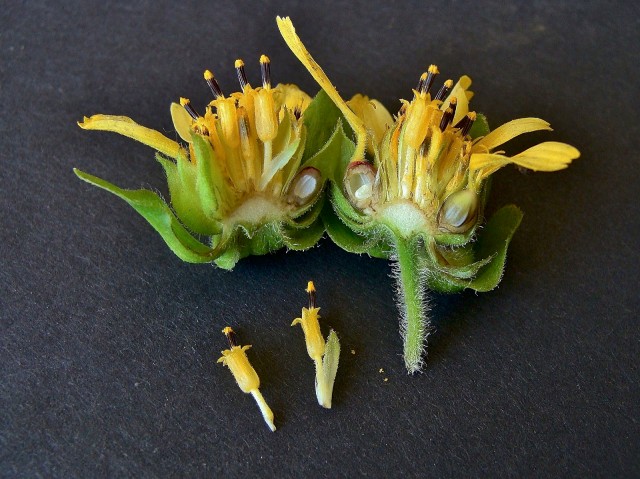 With fertilization, ray florets produce hard, slightly flattened, ovoid achenes. Achenes, about ¼ inch long and wide, are almost circular when viewed from a flattened side. The achenes are smooth and purplish to dark brown.