Resurrection fern (Pleopeltis polypodioides var. michauxiana), formerly Polypodium polypodioides, of the Polypody (Polypodiaceae) family is an evergreen fern that occasionally appears to die in periods of dryness while being “resurrected” when again moistened. The genus name is from Greek words meaning “many” and “shields” (see “peltate scale” below). The specific epithet is based on Greek words for “many” and “foot”, in reference to its rhizomes. In the U.S., resurrection fern is found from Texas to southeast Kansas to Delaware, thence southward to the Atlantic and Gulf Coasts. In Arkansas, it is known from every county. (The species, with its several varieties, has an extraordinarily wide range, occurring in South America south to Argentina as well as in Africa.) Other common names (based on its former classification) include little gray polypody and scaly polypody. Resurrection fern grows on living or dead tree trunks and branches, as well as on rocks. (Although resurrection fern is usually found growing on living trees, it is an epiphyte, not a parasite nor, like mistletoe, a hemiparasite. Plants get neither food nor water from their hosts, only a perch.) They derive much of their moisture and nutrients through their leaves from the air and surrounding dampness. They are often found in association with mosses. Sun exposure and available moisture are variable.

Resurrection fern is a low-growing, creeping plant with long, 1/16-inch-diameter, well-hidden rhizomes that follow surface irregularities of tree bark and other surfaces. Rhizomes, strongly attached to the host by roots, are covered with dense, thin, acicular  and light-colored scales. Rhizomes are profusely branched so that mats form in favorable sites, such as on tree trunks and across tree limbs.

Leathery leaves (fronds), ascending or descending from the upper sides of the rhizomes, measure up to about 9 inches long and 2 inches wide. They are broadly lance-shaped and deeply once-divided (pinnatifid), with up to 15 or more pairs of alternate, blunt-tipped lobes (and a single terminal lobe at the apex). Fronds are glabrous and dark-green above and a light grayish-green beneath. Lobes, 1/8 inch wide, are oblong to elliptic with wide bases, entire or with slightly wavy margins, and are generally slightly wider at the middle, tapering gently toward the tip. Petioles (stipes), about a third the length of the frond, are round in cross section with a flattened top. Other than the midrib, which is depressed above and expressed below, the only other obvious venation is the midveins of the lobes, the lesser veins being obscure.

Although fronds may be green at any time of the year, during dry conditions, they shrivel (losing most of their water content*) and become grayish, turning their lower surface upward to better absorb incoming moisture. Upon return of moist conditions, scales on the lower surface absorb moisture and pass it on to the living tissues of the leaf–the “resurrection” of a withered, apparently dead organism into a lush green plant.

The lower surfaces of the lobes are covered with small (1/16 inch), flat, overlapping scales, attached at their reddish brown centers (peltate) and surrounded by broad, transparent to light gray, more or less entire margins. Scales are numerous, variously sized, and concentrated along the blade’s midrib, from where they continue down the lower, rounded side of the stipe (petiole). The lower, rounded surface of the stipes also has dense, transparent, lanceolate scales and reddish brown hairs. The upper flat surface of stipes is glabrous. 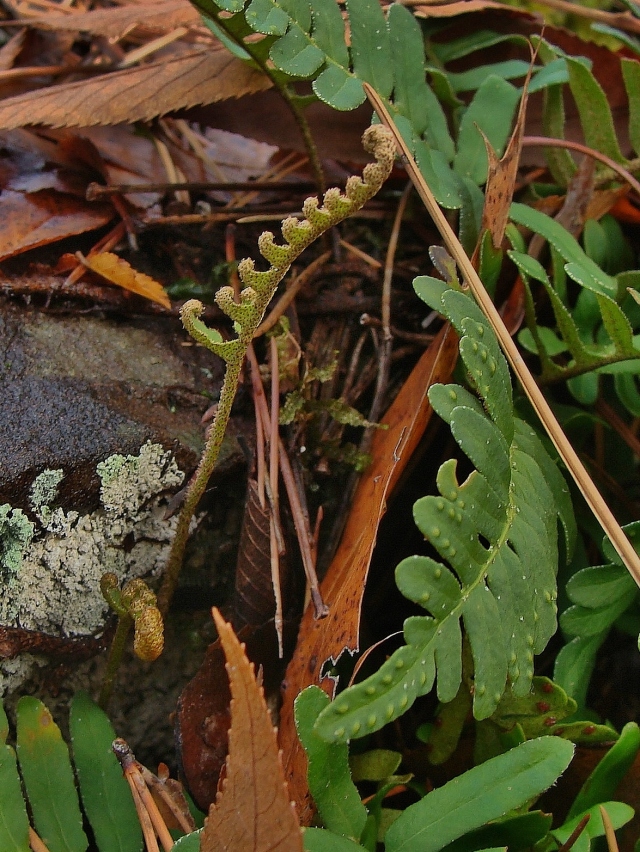 Photo 4: New fronds unfurl on which developing peltate and lanceolate scales can be seen.

Resurrection fern (and all other true ferns and their allies) produce new plants through spores**. Both fertile and sterile fronds have the same shape (monomorphic). In summer into fall, fertile fronds produce up to 80+ ball-shaped sporangia (structures in which spores develop) aggregated into discrete, flattened and rounded to oval “fruit dots” (sori). Fruit dots, on lower sides of lobes, tend to be on the upper ¾ of fertile fronds and on the upper half of their lobes. Fruit dots, near lobe margins, occur in rows on either side of the central veins. They develop without the protective cover (indusium) that is typical of many genera of ferns. Initially, sporangia are yellow but become brown as they mature and split open. With the splitting of the sporangia, dust-like spores are released to the breezes. The presence of sori on the underside of fronds results in a prominent raised area (pock) directly above it on the upper surface. 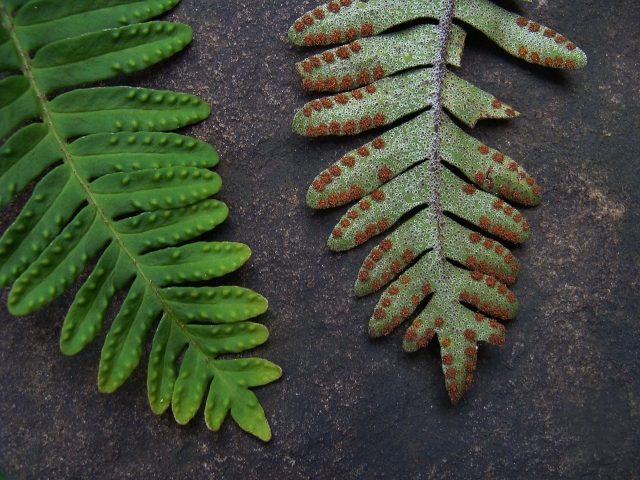 Photo 5: Upper side (left) and lower side (right) of fertile fronds. Pocks on left frond correspond to sori on the underside, as seen on frond at right. Frond on right shows, as well as sori, numerous peltate scales, which are found on fertile and infertile fronds. Photo in mid-October.

Resurrection fern can be “transplanted” by attaching a fern-bearing fallen tree limb to another tree or rock in a mostly shady, generally moist site. The fern-covered tree limb (or a fern division) must be firmly attached to its new host so that new rhizome growth will attach.

A second member of the Polypody family is also found in Arkansas, namely, rock polypody (Polypodium virginianum), and it may be mistaken for resurrection fern. Both species have similar leaf shape, but resurrection fern has narrower rhizomes and shorter fronds.  Fronds of rock polypody can be over a foot long.  The definitive characteristic to separate these two species is the peltate scales found on resurrection fern, but not on rock polypody. Also, rock polypody prefers consistently moist sites on rocky bluffs and boulders, rather than trees.  In Arkansas, it occurs primarily in the Ozark Mountains with a few occurrences as far south as Logan and Polk Counties.

**  Spore-producing plants are called ” sporophytes”.  They represent the diploid phase of a complex life cycle that–you may remember from your last botany or biology course–goes by the name of “alternation of generations”. A spore germinates in soil to become a prothallus (the haploid or “gametophyte” phase of the life cycle), a thumbnail-sized, non-vascular, alga-like plant.  The tiny prothallus produces gametes: both mobile sperm and attached eggs.  With fertilization of the egg, a diploid zygote can develop into a new diploid sporophyte plant–and start the cycle over again.