Green trillium (Trillium viridescens), of the Trillium (Trilliaceae) family is a spring ephemeral. It has a limited distribution in the U.S., occurring along eastern borders of Texas and Oklahoma, in southeastern Kansas and southwestern Missouri, and throughout western Arkansas. In Arkansas, it occurs primarily in the mountainous areas of the Ozark Plateaus, Arkansas Valley and Ouachita Mountains. Other common names include taper-tip trillium and Ozark trillium based on its primary occurrence in the Ozark Plateaus (not to be confused with Trillium ozarkanum). Preferred habitat is mesic, deciduous woodlands in rich, deep soils found on slopes and floodplains.

Green trillium, a rhizomatous perennial herb, produces straight, erect stalks with three leaves and often a single flower each. The segmented, shallow, horizontal rhizomes are round to somewhat flattened in cross-section with long slender roots. Equally spaced growth rings, wrapping around the rhizomes’s circumference, are prominent. New rhizomes develop over winter at the sides of older rhizomes and terminate with vertically rising shoots that produce vegetative growth. Over time, a thick root-mat with many stalks may form. 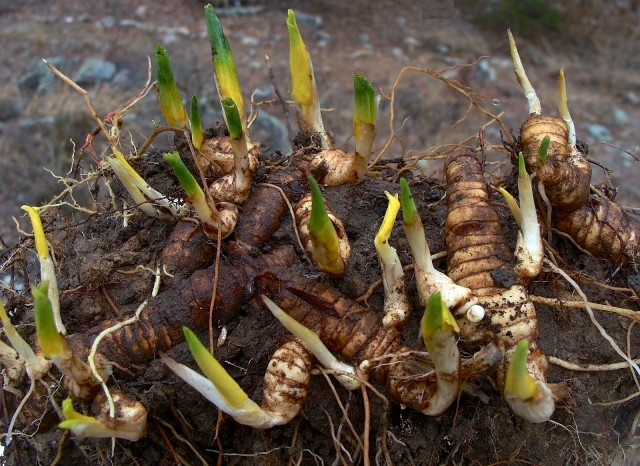 New stalks make their first appearance about mid-February as green tips rising above the duff, while white protective sheaths remain unseen. The green tips, at first tightly wound and vertically positioned, loosen as the stalks push above the ground surface. Stalks mature before heavy shading envelopes their habitat.

A mature stalk consists of a stem topped by three (occasionally more) large, whorled, sessile leaves and may or may not bear a single, sessile flower. The flower has three sepals and three petals. Stems are round in cross-section, slender, glabrous and without nodes. A stem may be two or more feet tall. (Occasionally, a stem may have four leaves along with four sepals and petals.)

The leaves are ovate-triangular to elliptical, glabrous, widest at the middle, with a tapered to rounded sessile base and a rounded to acuminate apex. The margins are smooth. Leaf size is rather variable, with the largest, subtending the flowers, up to 5 inches long and 3 inches wide. They are an overall medium green with an upper surface that may be lightly to heavily mottled with irregularly shaped and arranged dark green to silvery green splotches that are somewhat matched across the midrib. Lower sides of leaves are about the same color, except mottling is less noticeable. Mottling becomes less distinct as the growing season progresses. Leaves have a primary central vein (midrib) with an opposing pair or several pairs (depending on size) of arcuate secondary veins extending from base to tip. Tertiary veins branch off the primary vein and secondary veins toward leaf margins so that a triangular to rectangular pattern is created.

Photo 2: Mottling of leaves is strongest when they first expand. In this early March photo, sepals still cover the upright flower buds.

Flowers are at anthesis generally in early April. The three lanceolate, widely spreading sepals have a mostly uniform width, an acute to rounded tip and a slightly tapered sessile base. The three erect petals are somewhat twisted, with a broadened upper half that tapers to an acute tip and a narrowing lower half with a clawed base. Sepals are a medium green with possible slight purple coloration at their base, while petals are yellow green overall with variable purple coloration, mainly along their tapering lower half. Sepals may be over 2 inches long and 3/8 inch wide, while petals may be over 3 inches long and 3/8 inch wide. Margins of sepals and petals are entire. Venation of sepals and petals aligns with margins.

Flowers have six strap-like, purplish brown, vertical stamens that consist of long, thin, strap-like and curved anthers atop short filaments (filaments may be absent). The inch-long anthers are positioned with concave sides toward the flower center. Stamens are somewhat twisted with their rounded apexes converging above the pistil. The dark colored anthers have light colored edges which dehisce (split) along their entirety to release pollen. The pistil terminates in three stout, purplish styles spreading apically into thick “wings”, with the stigmatic areas along the inner sides. The ovary is small and whitish. A pungent odor from the flower attracts pollinator instects.

With fertilization, the styles dry and drop from an enlarging, green, weakly six-sided ovary. The ovary becomes a half-inch-tall, ovoid fruit, widest just below the middle and pointed at the tip. The immature green fruit becomes purplish to whitish with maturity, at which point it loosens off the stem and disintegrates to expose 20 or so smooth, brown, ovoid seeds with large fleshy white appendages (elaiosomes). These elaiosomes, a food source for ants, are carried, with seeds attached, into the ant colony. After removal of the elaiosomes, seeds are discarded by the ants. Thus, ants obtain food and the trillium has its seeds dispersed (an example of myrmecochory). 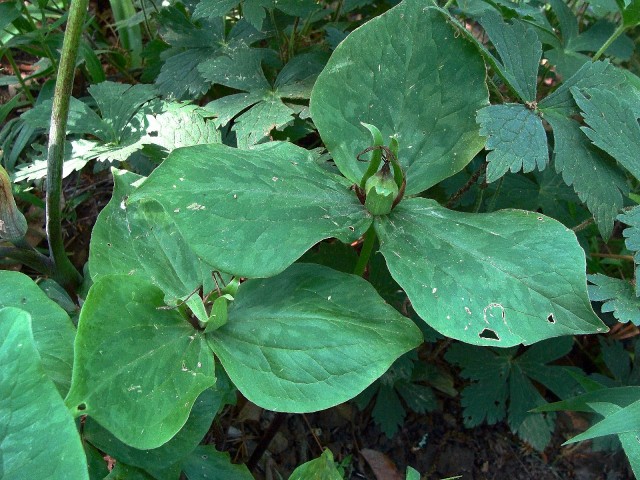 Photo 5: Immature ovoid fruits are surrounded by persistent sepals and leaves. Plant in background with palmate leaves is tall thimbleweed (Anemone virginiana), a common associate plant in the wild. Photo taken in early May.

Green trillium is a great shady-garden plant that provides springtime interest. It is a long-term perennial that forms a compact colony over time. It is maintenance free and provides an excellent example of myrmecochory.