Violet wood sorrel (Oxalis violacea) of the Wood Sorrel (Oxalidaceae) family is a small bulb-plant that bears shamrock-style leaves. The genus name is based on a Greek word for “acid”, in reference to the plant’s pleasantly sour taste. The specific epithet is Latin for “violet-colored”, referring to the flowers. It is found across the eastern U.S. from Texas to North Dakota to the Atlantic and Gulf Coasts, with the exception of Maine and New Hampshire. In Arkansas, the species occurs throughout the state. It grows in a wide variety of sunny to partially sunny sites and in a wide range of well-drained loamy to rocky or sandy soils of open upland deciduous and conifer woodlands, glades and prairies. 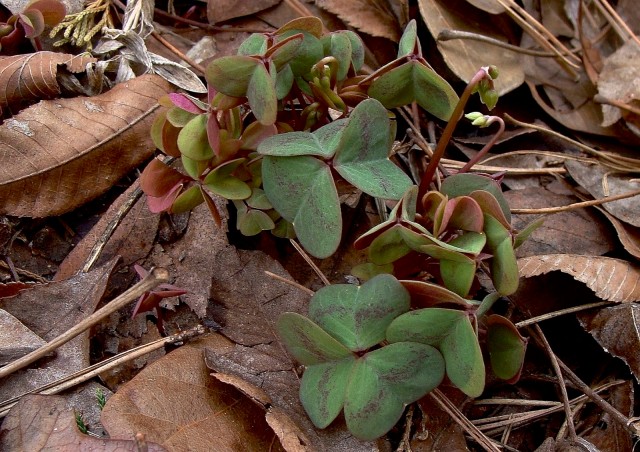 Violet wood sorrel has scale-covered bulbs* that are up to ½ inch long and ¼ inch wide, just below soil surface. Mature bulbs feel spongy. Scales, growing from a small basal plate within the bulb, loosely surround the central growth point that produces leaves and inflorescences at the bulb’s apex. Outer scales deteriorate into a loose matted layer that covers the inner, lanceolate to triangular scales. The light orange-colored scales have three straight prominent outer veins. The underside of the basal plate produces thin fibrous roots that extend downward along with thin, short, near-surface stolons that bear single bulbils (aka bulblets) at their tips. Bulbils also develop directly from the basal plate. In favorable sites, a single bulb quickly develops multiple offset bulbs and, with quick multiplication, may form a tight clonal group of numerous bulbs of “all” sizes. Within a clonal group, one to several bulbs may grow a vertically positioned, icicle-like rhizome that replaces the bulb. In addition to rapid propagation by cloning, plants readily multiply by seed.

Photo 3: Bulbs may be replaced by a vertical icicle-like rhizome. Photo: late April.

Leaves, growing directly from the basal plate, have long, slender, glabrous and weak petioles to 4 inches long. Palmately trifoliate leaves bear three sessile, broad heart-shaped, look-alike leaflets tapering to the petiole (obcordate leaflets). Leaflets, with smooth (entire) margins, are up to ¾ inch long and 1 inch wide and tend to remain somewhat up-folded along mid-vein. The apical leaflet slightly overlaps lateral leaflets. The upper leaflet surface and petioles vary from a dull medium green to purplish green with leaflets of many clonal groups having a reddish to purplish lateral band at about mid-leaflet, with a break at mid-vein. Lower leaf surfaces range from being a lighter green to being completely reddish purple. Petioles may be up to 3 inches long above soil/duff surface, while a very weak underground portion may be up to 1 inch long, as determined by bulb over-cover. Petiole color may be a light green or a light purple. Above-surface petiole length is not self-supportive and below-surface portion is especially weak. With all bulbs and bulbils in a clonal group producing leaves, a larger clonal group is densely leafy. Leaves contain tiny, sharp, calcium oxalate crystals.

Photo 4: Bulbs produce leaves and inflorescences directly from upper side basal plates within the bulb. The two smaller plants grew from exterior of basal plate and additional bubils remain attached to the large plant.

In late winter to early spring, flowers are borne in umbels (all pedicels attached at same point to peduncle) of up to about 10 or more flowers. Larger bulbs may have a half dozen or more smooth, erect, naked peduncles (scapes). One or two flowers on a scape bloom at any one time. As early umbels produce flowers, additional umbels may rise from the duff so that flowering continues for a month or more. Flowers close into a tight cylinder in response to cooler temperatures and darkness and tend to remain closed until temperatures approach 60 degrees. The above ground portions of peduncles, mostly glabrous, are up to 6 inches long, while very weak underground portions may be up to 1 inch long, as determined by bulb over-cover. Peduncles and pedicels of the same size have the same appearance. Plants become dormant in early summer, but some plants produce a second bloom in late summer in response to rain; however, with the fall bloom, leaves are not present.

Photo 5: In late summer, plants may produce a second bloom at which time, leaves are not present. Photo: mid-September.

Half-inch wide flowers have a corolla composed of five violet to lavender (occasionally white) petals that are loosely interconnected at their lower margins. Petals, broadly rounded and slightly overlapping in spin-wheel fashion, have parallel main veins that are a darker color distally, and become dark green into the flower’s throat. The green coloration in the throat has white shading to both sides. The undersides of petals have similar coloration, although colors may be lighter. Corollas are set into narrow campanulate (bell-shaped) green calyxes of five free, elongate-triangular, green sepals, each with a callous orange tip (calcium oxalate crystals). Sepals are entire and glabrous.

Photo 6: As seen in this early March photo, a clonal group may produce many umbels. A couple of flowers in an umbel bloom at any one time, as additional umbels rise from the bulbs.

Flowers of violet wood sorrel have five longer stamens in an inner whorl that are surrounded by five shorter stamens in an outer whorl, along with a single pistil of five carpels. Nectaries are located at base of outer stamens only. The species is heterostylous, specifically distylous–the flowers are dimorphic. One morph has styles that are longer than the stamens (the “pin” morph) while the other morph has styles that are shorter than the stamens (the “thrum” morph). Flowers of any one plant or clonal group have the same morph. Pollen from a flower of one morph cannot easily fertilize another flower of the same morph, thus encouraging out-crossing. In sunny sites, flowers are oriented toward the sun in the day and remain in that position overnight. Glabrous seed capsules, round in cross-section with a gradually tapering upper portion terminating with a flattened tip, split into five vertical sections from which small, wrinkled, light brown seed are ejected.

This small attractive species would be ideal for a naturalized garden area where its inclination (in a sunny preferred habitat) to freely multiply would be welcomed. Violet wood sorrel, an early food source for small bees, is avoided by deer and rabbits. Humans may eat the leaves, but intake should be of limited quantity, due to presence of tiny sharp calcium oxalate crystals.

In addition to violet wood sorrel (Oxalis violacea), as many as four yellow-flowering native species of the genus occur in Arkansas: three “yellow wood sorrels” (Oxalis dillenii, Oxalis florida, and Oxalis stricta) and “Texas wood sorrel” (Oxalis texana). Non-native rose or pink wood sorrel (Oxalis rubra or articulata) is also reported in the state. Flower color and the tendency towards purplish accents on the leaves readily separate Oxalis violacea from the four yellow species. The non-native rose or pink wood sorrel can be distinguished from Oxalis violacea by its horizontal rhizomatous roots, flowers that are a solid dark pink, and leaves that do not exhibit any purplish coloration.