Sensitive brier (or briar) (Mimosa quadrivalvis var. nuttallii*) of the Bean (Fabaceae) family is a sprawling perennial legume that is covered with prickles. The genus name is from a Greek word for “mime” or “mimic,” in reference to leaves in some species that fold when stimulated, suggestive of mimicking conscious life. The specific epithet is from Latin, meaning “with four valves,” in possible reference to seed shape. The varietal name honors Englishman Thomas Nuttall who, beginning early in the 19th century, published books on U.S. plants. This variety, sometimes treated at the species level as Mimosa nuttallii, occurs in the central U.S. from Texas and Louisiana to North Dakota and Wisconsin, with a couple scattered reports also from Michigan and Pennsylvania. It is found in sunny areas of prairies, roadsides and woodland margins where soils are sandy to rocky. In Arkansas, it occurs across much of the state except for lowlands within the Mississippi Alluvial Plain. Other common names include cat’s claw brier, bashful brier, and Nuttall’s sensitive brier. 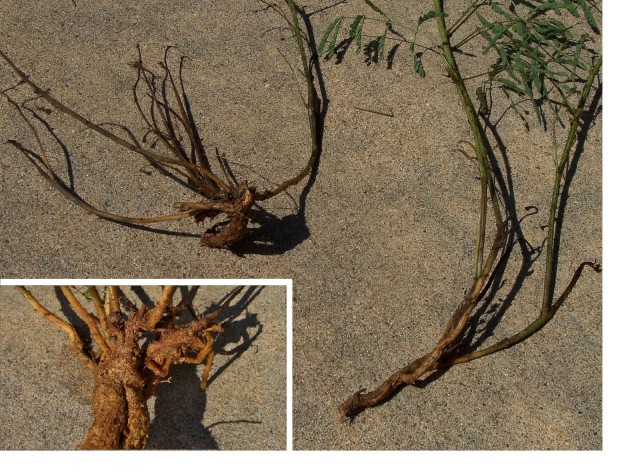 A mature plant may have a dozen or more floppy stems that radiate from the caudex. Stems become tightly intertwined with other stems and surrounding vegetation. Stems, to 4+ feet long and unbranched, are terete with six slight longitudinal ribs. The plant hugs the ground in absence of other vegetation; stem ends may rise about a foot. Stems mostly disintegrate over winter, other than the lowermost portions which remain viable.

Sensitive brier is heavily armed with prickles (outgrowths of epidermis). The short, slender, recurved prickles are irregularly spaced along the ribs that extend along stems and onto petioles (leaf stalks), leaf midribs, petiolules (stalks of leaflets), and pedicels (flower stalks). Prickles hold the floppy stems in place against the ground or other vegetation. Prickles cause any plant part touched by a passerby (human or animal) to latch on. The entire plant is hairless (glabrous).

The 4- to 5-inch-long compound, alternate leaves are even-bipinnate, having four to eight opposite, even-pinnate lateral leaflets which are divided into 10 to 14 even-pinnate pinnules. Leaves, 4 to 5 inches long and spaced 1 to 3 inches apart, attach to stems between the ribs. A pair of weak linear stipules is located at the leaf base. The petiole is about one-third as long as the rachis (leaf axis that bears leaflets). Secondary leaflets or pinnules, about 3/16 inch long with tiny tips, have elliptical blades. Pinnules, medium green above and a lighter green below, have obscure venation except for midribs. Pinnule blades are more narrow on the up-rachis or distal side of midribs. Short pulvini (swollen sections subject to changes of turgor) at the bases of pinnules allow pinnules to fold along the leaflet midrib when touched, as well as overnight, on cloudy days and when plant is shaken.

In mid-spring, new leaves along upper portions of stems subtend long, slender peduncles topped with ball-shaped flower heads. With anthesis, all 80 or so buds of a head open simultaneously. Each flower has 12 or more strongly exserted, straight, half-inch-long, thread-like stamens. With stamens radiating in all directions, the ball-shaped heads are about 1 inch in diameter. Individual flowers are not discernable. Rose to pink filaments are tipped, during the first day of bloom, with globular two-lobed anthers that produce light yellow pollen. Stamens encircle a small, elongate, green ovary topped by a style that has the same pink color and shape as filaments. Flowers each have a tiny calyx and five triangular petals that unite to form a one-eighth-inch long, bell-shaped corolla. Calyx is a light green, the corolla a light green to tan. After a single day of bloom, flower heads quickly fade as additional heads “open” up-stem. All non-flower parts of the plant are at first a light green that changes to medium green through the growing season. 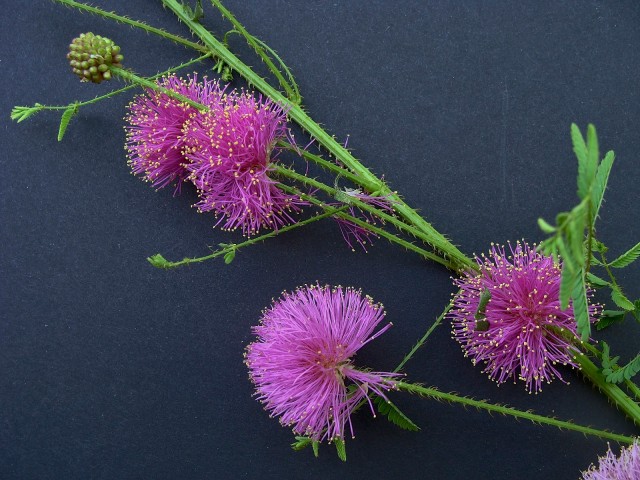 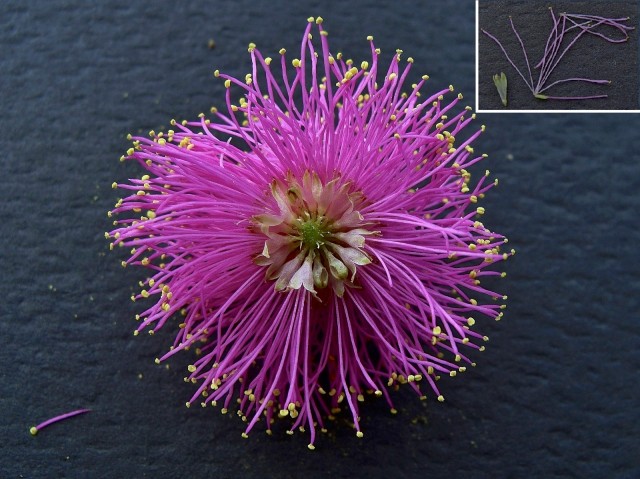 Photo 5: With peduncle removed, calyx and corolla of individual flowers can be seen. Inset: flower with 12 stamens. Note, below right, green ovary topped by a style with appearance similar to that of stamens.

In midsummer, sensitive brier produces slender pods with large prickles along ribs that extend the length of the pods. Each flower head produces a limited number of pods. Mature pods, to 3+ inches long, can be oddly shaped: seeds bulge such that pods are intermittently slim between them. As pods dry, they split into two valves. Seeds are smooth, dark brown, somewhat oval and with flattened sides, and about 1/8 inch long by 1/16 inch wide.

Sensitive brier is suitable in a sunny, dry natural garden where the plant can grow without disturbance. Plants have attractive twice-compound leaves, showy flowers and an amazing display of prickles. They do not spread aggressively, either by seed or runners. They are difficult to grow from seed but can be started from cuttings. Seeds are a purgative.

Another Arkansas species with similar appearance is powderpuff or shameface (Mimosa strigillosa). Powderpuff, the only other Arkansas Mimosa, is found across the West Gulf Coastal Plain and southern portion of the Mississippi Alluvial Plain. It does not have prickles, and it spreads aggressively by runners. Another similar-looking plant is yellow puff (Neptunia lutea), but this species also does not have prickles and has yellow, more elongate flower heads.

Note: Non-native invasive mimosa, a.k.a. silktree, (Albizia julibrissin) is not in the Mimosa genus.