Gum plant (Grindelia lanceolata) of the Sunflower (Asteraceae) Family is a viscid (sticky) plant with thick leaves. The genus name recognizes the early 19th-century Russian botanist, David Grindel. The specific epithet refers to the lance-shaped leaves. In the U.S., the species ranges from New Mexico to Ohio and Kentucky, as well as Wisconsin and Connecticut. In Arkansas, it occurs throughout much of the Ozarks and Ouachita Mountains. Habitat preference is sunny areas with rocky soils associated with limestone, sandstone or shale, where soils are generally dry to seasonally moist, especially glades, prairies and roadsides. Other common names include narrow-leaf gumweed, spiny-toothed gumweed and fall gumweed.

Gum plant is a short-lived perennial with fibrous roots along with one or several woody rambling fairly short taproots. The entire plant is glabrous (without hairs) and may feel viscid due to resinous pores. A mature plant has a half-dozen or more mostly erect, stiff, herbaceous stems. Stems, to 3 feet tall, typically have a half-dozen or more branches in their upper two-thirds. These branches, in turn, typically have 0 to 4 secondary branches. The slightly striate stems are light green to reddish in their actively growing upper portions while lower portions of a growing plant become tough and brown. All branches, which are arranged alternately, terminate with a solitary flower head. At the end of the growing season, erect dead stems may persist, even to the end of the next growing season. 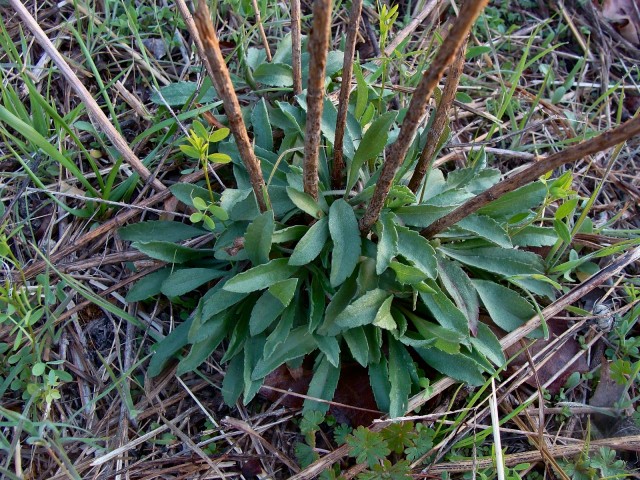 Generally, the simple, alternate and ascending leaves are lanceolate with prominently serrate margins and acuminate leaf apexes. Marginal teeth and leaf apexes are apiculate. Some plants may have entire leaves, especially near the inflorescence; these tend to be twisted with undulated margins. The sessile, thick leaves feel slightly to moderately viscid. Upper and lower leaf surfaces are medium green with lighter green mid-veins. Mid-veins are weakly expressed and secondary pinnate veins are obscure. Pores may be evident on upper and lower leaf surfaces. Leaf size gradually decreases from 4 inches long and ¾ inch wide at stem base to one inch or less long and ⅛ inch wide at stem apex. When soil dries, lower leaves die while new apical growth and flowering continues. 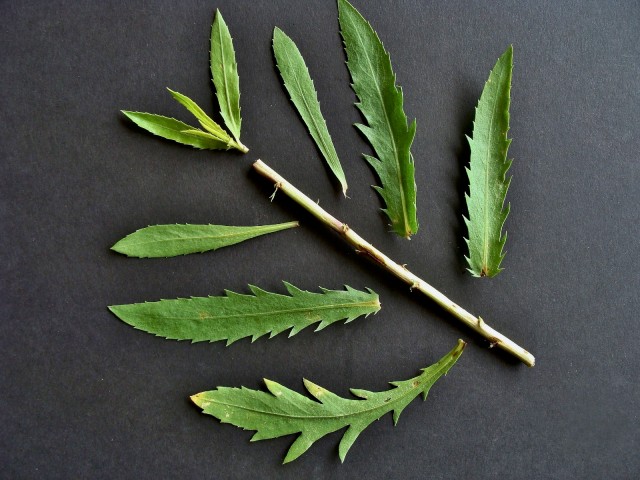 Photo 2: Leaf shape changes from stem base to stem apex (leaves have been flattened for photo). Cluster at upper left is a growing tip prior to branching of stem. Leaves of stem segment have been removed, but alternate leaf arrangement is evident. Photo April 29. 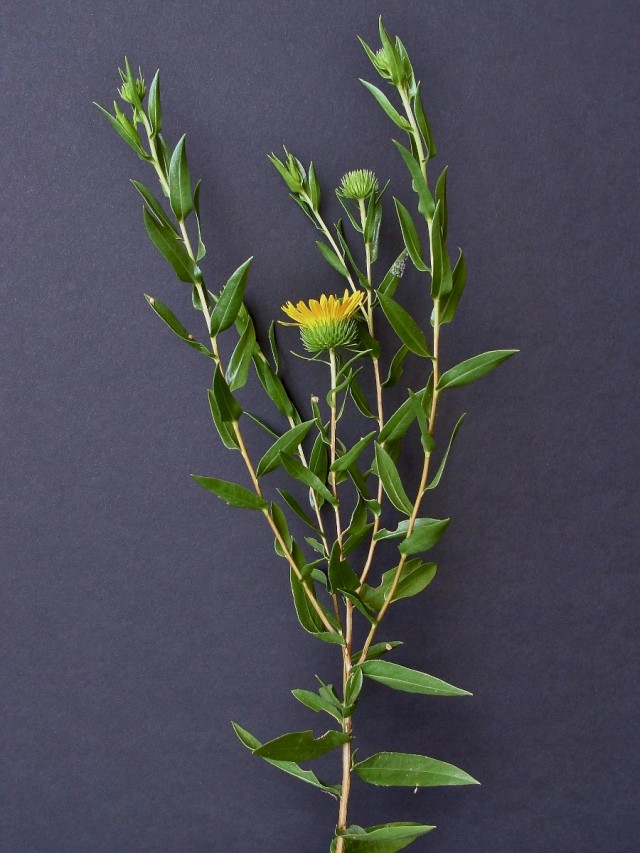 Composite flower heads, when still in a tight bud, have a spherical burr-like appearance due to an involucre of closely spaced, linear to lanceolate bracts. With anthesis, as receptacles assume a shallow bowl-shape, the burr-like appearance becomes hemispherical. The bracts, up to ½ inch in length and 1/16 inch wide, have short flattened bases while the remaining length is terete (round) in cross-section. Bracts, extending outwards and upwards, are pliable with sharp apiculate tips.

Flower heads, with bright yellow ray and disk florets, reach anthesis in mid-summer with bloom period extending for a month or so as flowering at tips of newer branches continues. A mature flower head, to about 2 inches wide with a ¾ inch central disk, has about 30 to 35 ray florets and several hundred disk florets. Ray florets have strap-like ligules, to ¾ inch long and ⅛ inch wide, that are widest at their mid-section with a very gradual narrowing to a tapered base and apex. Flower heads are more viscid than other parts of the plant, and botanists have a devil of a time trying to dry these heads when preparing pressed specimens. 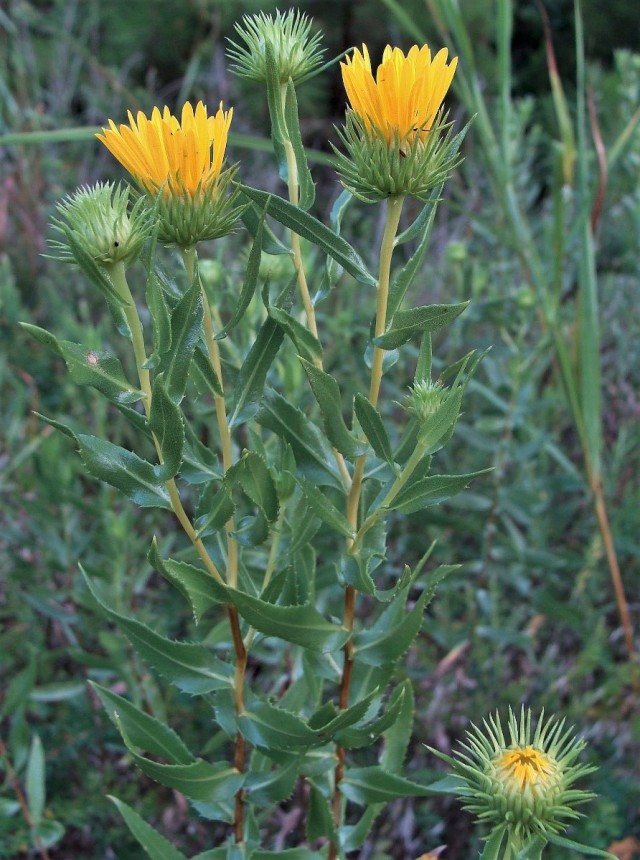 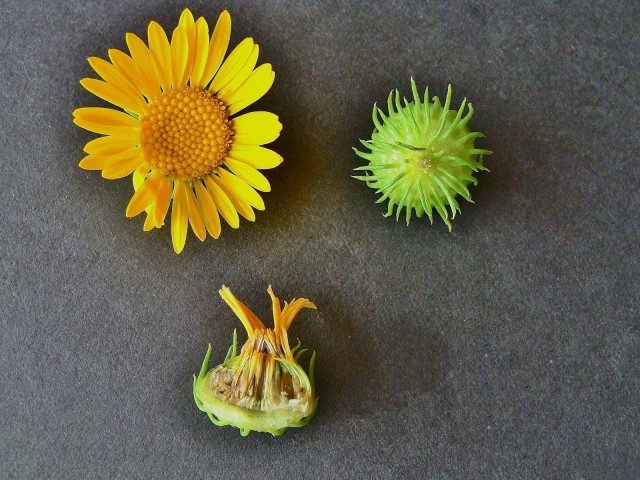 Photo 5: Display shows 1) flowerhead with disk florets beginning to open, 2) bottom of a bracteate receptacle and 3) a divided flowerhead showing the receptacle in cross-section and ovaries.

Ray and disk florets are both fertile, with ray flowers being pistillate (no stamens) and disk flowers being perfect. The tiny, tightly compressed disk florets (⅛ inch long) are tubular, with five triangular lobes; five elongate stamens have fused (connate) anthers that surround the style. Like a plunger, the style emerges from the circle of anthers, pushing the pollen out, where it becomes available for contact with pollinating insects. As the pollen is dispersed, the stigmas then split apart (bifurcate) to expose two elongate receptive stigmatic surfaces. Disk florets of the composite head flower centripetally, from the outside in–the oldest florets thus are at the periphery of the head, the youngest (often still in bud) are in the center. 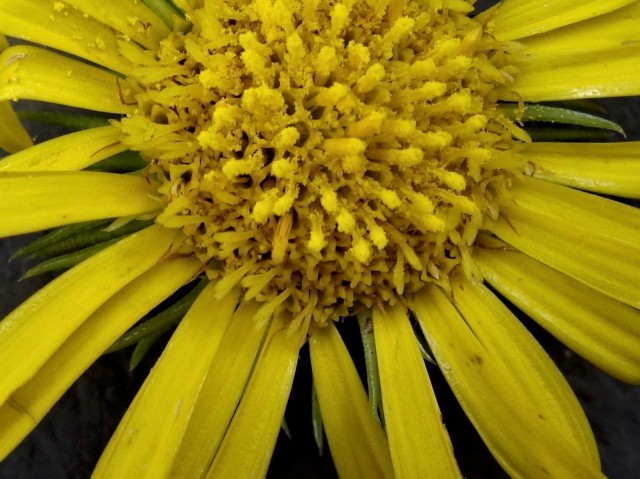 Photo 6: Pollen-tipped anthers are exserted from younger florets in central portion of flower head, while around the perimeter exserted stigmas of older florets have bifurcated to expose stigmatic surfaces.

A fertilized floret produces a cypsela (indehiscent fruit from an inferior ovary, often called simply an achene). The light brown, smooth achenes are flattened and oblong with rounded bases and cut-off apexes. Apexes bear two straight smooth awns, often exceeding length of corolla tubes, which drop off as fruits mature. Achenes have a central rib on their smooth sides and thin lateral margins. 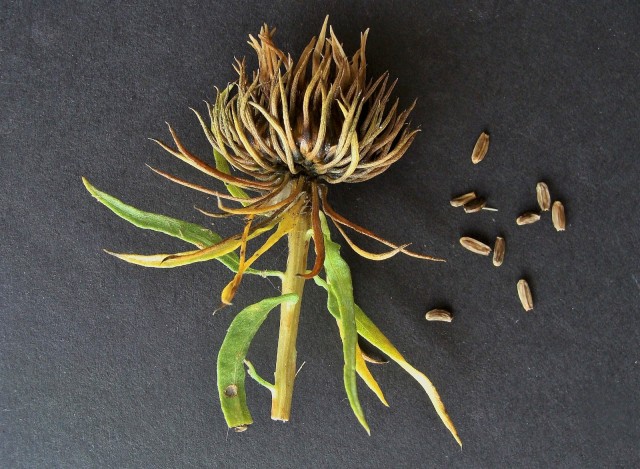 Photo 7: Fruiting head: With flowering completed, achenes fall from the receptacle, leaving only the phyllaries (bracts) of the involucre. A discarded awn is partially hidden by an achene. Photo October 15.

Gum plant, a short-lived perennial, may be an appropriate choice for a wild garden. It has thick attractive leaves and bright yellow flower heads with burr-like involucres. However, with dry soils, lower leaves die and the plant becomes “leggy”. Thinning of seedlings may be required. Gum plant flower heads appear similar to those of many yellow composites, especially the taller woodland sunflowers, whose larger heads are in bloom at the same time.

In addition to Grindelia lanceolata, two other gum plants native to the south-central and western U.S. have been collected in Arkansas (though they may have been introduced to the state); namely, Spanish gold (a.k.a. wax gum plant or waxweed; Grindelia ciliata [or Prionopsis ciliata]) and curly-cup gum plant (Grindelia squarrosa). Grindelia ciliata, in comparison to G. lanceolata, has flattened, elongate-triangular floral bracts that are straight and leaves that are broader with margins spiny rather than serrated. Grindelia squarrosa, in comparison to G. lanceolata, has stubbier, sharply recurved floral bracts and shorter, wider leaves with less prominent serrated margins.