Carolina elephant’s foot (Elephantopus carolinianus), of the Sunflower or Aster or Composite (Asteraceae) family, is a herbaceous perennial with leafy stems and small lavender flowers. In the U.S., the species occurs from eastern Texas to southeastern Kansas, east to Pennsylvania and New Jersey, and southward to the Atlantic and Gulf Coasts. In Arkansas, it occurs statewide. The genus name and common name refer to the large, flat, prostrate basal leaves of some species of the genus (though not this species). The specific epithet and common name refer to the plant’s original recognition and description from the Carolinas. Preferred habitat is well drained yet moist soils of partially sunny lowlands or open woods and along woodland edges and streams. The plant has a small knobby root crown with long, descending, tough and ropy fibrous roots.

Plants generally have a single stem 1 to 2 feet tall, but may reach a height of 4 feet. Stem leaves at the base are closely spaced, to ¼ inch apart, becoming widely separated (and clearly alternate) above. From lower to mid-stem, clasping leaves form a sheath around the stem. Stems are densely hirsute below, with hairs becoming sparser and somewhat more appressed in the inflorescence.

Leaves, to 8 inches long and 3½ inches wide, are dark green above and medium green beneath. Below the inflorescence, they are clasping, with margins coarsely serrate to scalloped; within the inflorescence, smaller leaves are sessile and subentire. Upper and lower surfaces are sparsely hirsute, with longer and more dense pubescence along the veins beneath.

In most composites, the so-called flower is actually a head, an inflorescence comprising a group of tightly clustered, small flowers that mimic a single flower. In the genus Elephantopis, these primary heads are further clustered into secondary heads. In E. carolinianus, 3-20 such heads are grouped together, at the tip of 1-4 inch peduncles, into secondary heads about ⅜ inch high and ⅝ inch broad, subtended by 3 leaflike bracts. Each primary head is itself surrounded by an involucre of about 8 phyllaries (bracts), with the 4 inner phyllaries longer than the outer. These thin, lanceolate to linear phyllaries are whitish proximally and green distally. Each involucre surrounds 4 flowers.

Blooming occurs over a month in September-October with individual flowers lasting for one day. Flowers are ¼ inch long, with lavender (sometimes white), 5-lobed corollas. The lobes are positioned to one side of the flower, creating bilaterally (rather than radially) symmetrical corollas. All 4 flowers within a single involucre bloom on the same day. And because they are positioned radially around the involucre’s center, each primary head of 4 corollas appears to form a single 4-petaled, 20-lobed flower! With only a few involucres blooming at one time, a plant may continue to produce “flowers” for a month or more.

Lobes of the corolla join abruptly to form a slender tube twice as long as the lobes. The corolla tube arises from the summit of a bullet-shaped ovary, each ovary bearing, just outside the corolla tube, 5 awnlike scales that taper to bristle-like tips. These awns, which are modified sepals, constitute the so-called pappus, a structure in the Composite family typically involved in dispersing the 1-seeded fruits.

Flowers have 5 stamens and 1 pistil. White stamens have thread-like filaments bearing relatively large elongate anthers. The anthers are fused to each other to form a tube through which the style passes at anthesis. As the style extends like a plunger through the anther tube, clingy white pollen is pushed above the corolla and becomes available to pollinating insects. Thereafter, the style bifurcates to expose the elongate stigmatic surfaces to pollen, typically from the flowers of other heads. 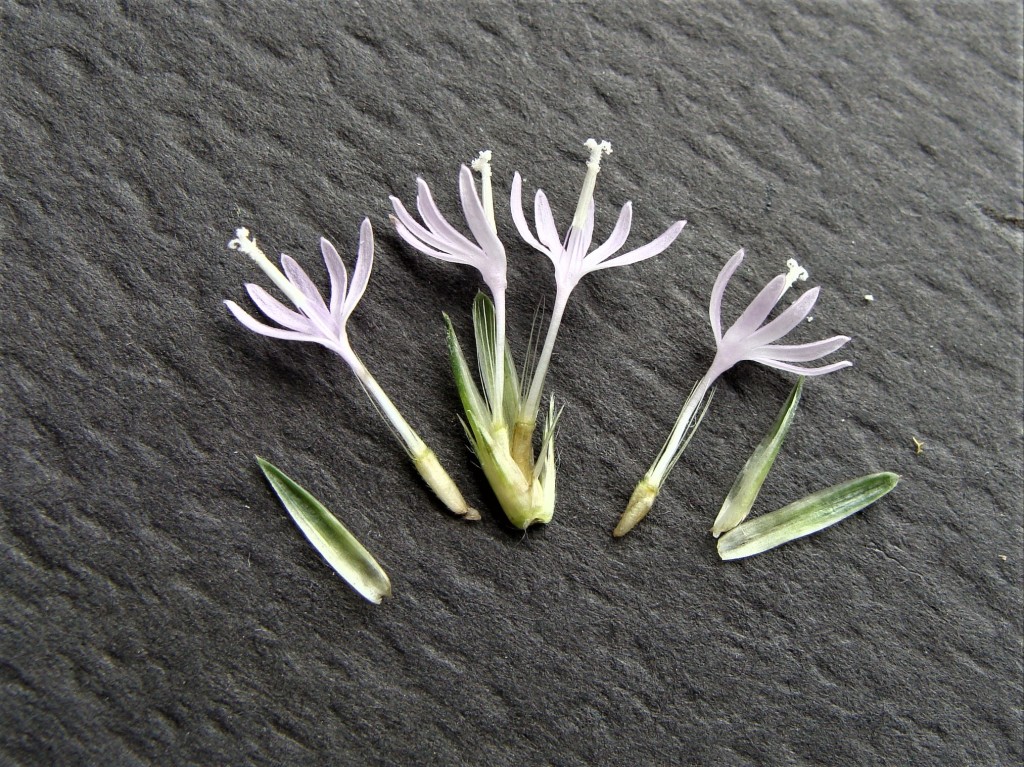 With fertilization, ovaries mature into elongate, flattened, 1-seeded, brown achenes. Achenes are ribbed and have very short hispid pubescence. They are tipped with 5 awns slightly longer than the achenes. With drying, awns become straight and stiff, so that, together with the pubescence, dispersal may be effected by passing mammals.

Carolina elephant’s foot has an interesting open structure and flower heads that are unusual for the Aster family. Plants would be an interesting addition in a garden setting, but due to aggressive self-seeding, this species is perhaps better suited for a natural area. It does well in light shade and can survive temporary dry periods. It is nibbled by deer.