Grape ferns, succulent ferns in the Ophioglossaceae (Adder’s-tongue Family), are named for their round, clustered sporangia (spore cases), which resemble a bunch of grapes.  These ferns are smooth, without scales of any kind, and have soft fleshy stems and roots.  The leaves (fronds) are generally triangular.  The roots, two to three inches below the soil surface, spread radially from a short underground vertical stem or rhizome.  Grape ferns are solitary, having a single stipe (petiole) on infertile fronds and a divided stipe on fertile fronds that supports a dissected vegetative blade and a branched cluster of spore cases (sporangia).  Grape ferns prefer rich, moist shady areas with good drainage.

Young fronds come out of the soil in a bent form with pinnae (leaflets) unfolding laterally as the frond becomes erect (other ferns’ leaves begin as fiddleheads).  The sporangia split when ripe to disperse spores into the air.  Once ripened, the fertile portion quickly withers.

A spore germinates to produce a new plant called a gametophyte (the so-called sexual phase of fern life).  This underground tuberous plant contains no chlorophyll and depends on a fungus for nourishment (a mycorrhizal association).  Gametophytes may exist underground for eight years before producing sperm and egg that lead to rhizomes and above ground fronds.

Plants  of cutleaf grape fern appear in late summer to early fall, producing a single frond consisting of vegetative and fertile portions joining at or below ground surface.  The vegetative portion is fleshy and semi-leathery and often parallel to the ground.  The fertile portion of mature plants stands upright (see photo 2) above the vegetative section.

New vegetative fronds have a fresh green appearance in the early fall, darkening to a bronze-green color after frost; a distinct characteristic of this plant (see photo 3). 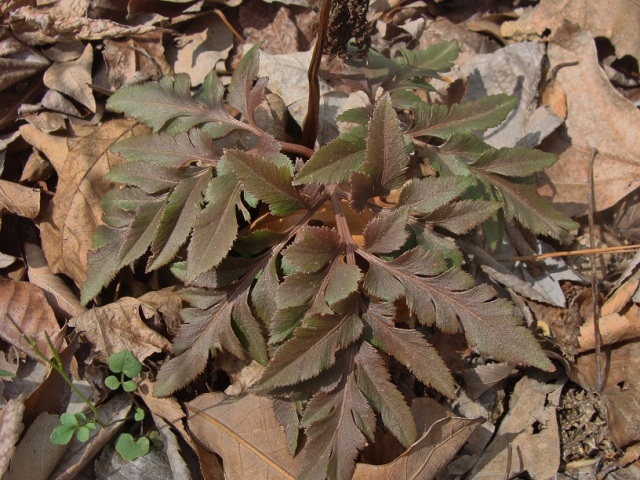 Fronds of cutleaf grape fern persist through the winter and into early summer, despite the fertile portion having withered in the fall.  The vegetative portion of the frond may persist until the next year’s growth appears.

Rattlesnake fern (Botrychium virginianum) (see photo 4), a type of grape fern, is so called either because its sporangia resemble snake rattles or because the plant’s habitat can also be rattlesnake habitat.  It is a wide-ranging plant found in most of the United States and other parts of the world, such as Mexico, Australia, parts of Asia and Norway. 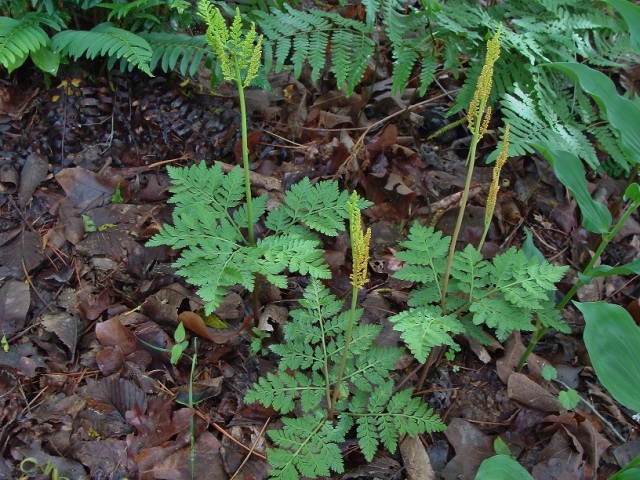 This species shows new growth in late spring with the fertile portion of the frond developing before the vegetative portion has fully unfolded.  The plant is generally less than a foot tall.  The vegetative part tends to be horizontal to the ground and light to medium green, with the base varying to pink. Pinnae (leaflets) are variable from plant to plant but generally are very dissected and give the frond a delicate, lacy appearance.  The stalk of the sporangium-bearing portion grows from a juncture above the stipe.  An additional fertile stalk may form on a plant that is without a vegetative portion.

Both ferns grow in similar habitats and have a similar appearance.  However, the growth period can be used to distinguish between them.  Additionally, rattlesnake fern has a thin-textured, non-leathery leaf as compared to the more leathery leaf of cutleaf grape fern.