Yellow crownbeard (Verbesina helianthoides) of the Aster (Asteraceae) family is found in the US from Iowa and Kansas east to Ohio, and southward to Texas and Georgia.  It is found pretty much throughout Arkansas except for some counties in the Mississippi Alluvial Plain.  This species is also known as yellow wingstem or gravel weed.  The generic name Verbesina perhaps alludes to a Verbena-like appearance, although the exact etymology is unknown, while the specific epithet, helianthoides, relates to its yellow composite flowers which resemble sunflowers of the genus Helianthus.

Yellow crownbeard is found in moist soils of prairies, savannas, glades, forests, and roadsides in full sun to light shade.  This colonial, herbaceous perennial has multiple stout hairy stems generally 2-3 feet tall.  Stems are not branched except at the top in the inflorescence.  Ovate-lanceolate, mostly alternate leaves with widely spaced small teeth, are up to 6 inches long and 2½ inches wide.  The leaves have dense, short, white hairs, and feel soft to the touch.  Leaf tips taper gradually to long slender points (attenuate), while the leaf blade tapers more abruptly at the base. 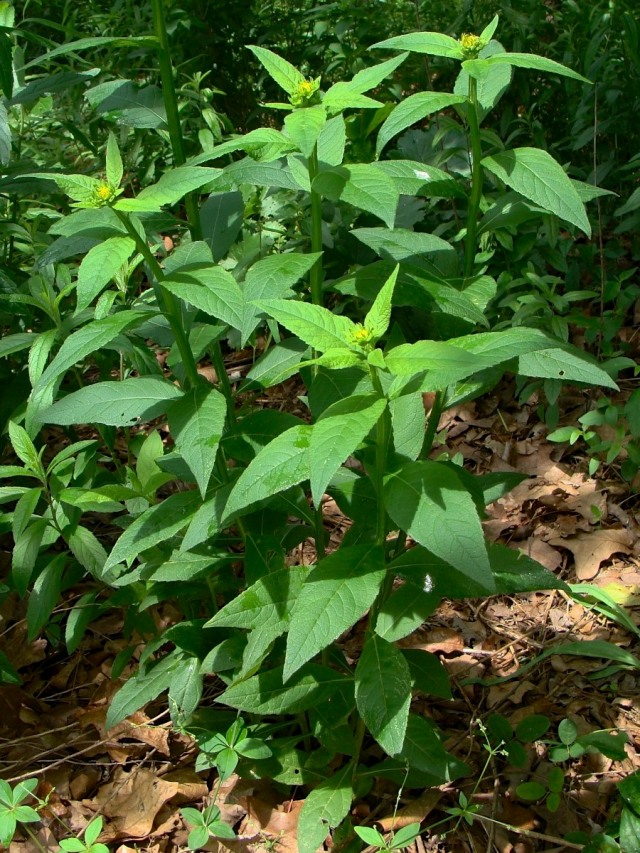 Leaves are sessile, and leaf blade tissue extends onto and down the stem as narrow “wings.”  One of the two wings connected to each leaf extends straight down-stem to the next leaf where it ends immediately above that leaf.  The second wing extends straight down-stem to the third leaf directly below.  With this pattern, five wings radiate from the stem at any given point.

The inflorescences, occurring in late spring at the tips of stems, consist of two to five yellow composite flower heads on short, hairy peduncles arranged in corymb (flat-topped) fashion.  Each composite head, 2 to 2½ inches in diameter, has up to about twelve yellow pistillate ray flowers surrounding 40 to 80 yellow tubular disk flowers each with five lobes.  Involucres (the calyx-like structures at the base of the flower heads) are composed of 16 to 21 phyllaries (sepal-like bracts) in two to three layers.  Phyllaries are narrow and fused at their bases while their bluntly triangular upper portions extend outward, loosely cupping the head.  Dark brown, 0.2-inch, flattened achenes are oval-lanceolate in shape, with keels on their edges and two short awns at recessed ends.

Photo 5:  Flower heads in the inflorescence range from those in bud to those fading.

Two other Verbesina species with unbranched stems may often occur throughout Arkansas in the same or adjoining habitats as yellow crownbeard; namely, frostweed or white crownbeard (Verbesina virginica) and yellow-ironweed or wingstem* (Verbesina alternifolia). Frostweed is a significantly larger plant with wider leaves and white flower heads.  Yellow-ironweed, with coarser leaves, which are sometimes opposite on the lower stems, and with or without wings on the stems, generally has purple coloration on stems and yellow flower heads bearing scattered, drooping yellow ligules (ray flowers) and a single row of reflexed phyllaries.  Frostweed and yellow-ironweed bloom much later in the year than yellow crownbeard.  Of the three species, only frostweed reliably produces frost flowers, although yellow-ironweed is also reported to produce them occasionally.

For gardens or naturalized settings, yellow crownbeard should be welcomed.  It is a hardy, attractive perennial of modest height with upright stature and nice character.  The yellow composite flowers of yellow crownbeard bloom earlier than those of sunflower species.  Yellow crownbeard may form colonies, but it has not been noted to be weedy.

*With Verbesina helianthoides and Verbesina alternifolia both having yellow flower heads and winged stems, the common name “yellow wingstem” has been used for both species.  Photos and plant descriptions found on the internet are sometimes not correctly aligned.