Tall bellflower (Campanula americana*) of the Bellflower (Campanulaceae) family is an annual or biennial forb. In the U.S., it occurs from Louisiana and Oklahoma north to South Dakota and Minnesota, east to New York, thence southward into states that border the Atlantic and Gulf Coasts. In Arkansas, it occurs across the highlands of the northwestern half of the state and along Crowley’s Ridge. The genus name is from Latin for “bell”, in reference to the “campanulate” flower shape of other species of the genus. The specific epithet relates to its occurrence in America. Preferred habitats include moist to dry loamy soils of shady to partially sunny woodland borders and openings, rocky slopes, and in drainages. Another common name is American bellflower.

Tall bellflower, reaching 3 feet or more in height, has several to a dozen stems that grow from the base of a main stem or directly from a thick caudex with light tan, smooth lateral and tap roots. A plant’s stems all have a similar height and bear flowers at the same time. Stems, terete in cross-section, are heavily hispid (short stiff hairs) in their lower portion with pubescence decreasing up-stem to become mostly glabrous in the uppermost portion of the inflorescence. Several to a half dozen axillary branches, from ½ inch to 6 inches long, may occur below a point at about ⅓ stem-length from stem apex. Stems and branches are a medium green with ridges that tie to leaf petioles. While the lower portions of stems are hollow, smaller stems and branches are filled with a white pulpy material. Plants have a milky sap. The earliest basal leaves, which have oval blades and long petioles, wilt away with stem growth.

Photo 1: In this late April photo, long-petiolate cauline leaves can be seen at base of stems along with short hispid pubescence along stems and leaf margins.

Spacing of cauline leaves decreases from stem base, where spacing may be up to 2 inches, to the upper portion of the inflorescence where spacing may be ⅛ inch. Upper leaf surface is dark green with a pale green midvein while the lower surface is dark green with a silky sheen. Margins, except for smooth edged (entire) linear leaves near stem apex, are serrated with white-tipped points. Petiolate leaves have narrow decurrent wings that decrease in width down-petiole and may disappear before reaching the stem. Venation, pinnate with secondary veins arching toward the apex without reaching the leaf margin, is prominently impressed on the upper surface and expressed on the lower surface. On the upper surface of larger leaves, hispid hairs are mainly on the midvein while on the lower surface hispid hairs occur on all veins. Ciliate hairs also occur along margins of larger leaves. Leaves uppermost in the inflorescence are so tiny, needle-like, closely spaced and intermixed with flowers that they are difficult to see.

Flower buds in leaf axils typically occur in groups of three (triads) in which the central bud matures before the lateral buds. Along branches, axillary flower buds typically occur singly. Triad buds, growing directly from stems/branches, do not have peduncles or pedicels. Buds are initially tightly wrapped in prominent linear sepals so that buds have a skinny conical shape. Once sepals flare backward, the actual flower bud is seen to have a round, elongate, stub-nosed shape that, as it enlarges, changes from light green to white to blue (or lavender) with a white base. As buds approach anthesis, they are deeply corrugated with pubescent, frazzled tips.

Tall bellflower has an unusual flowering sequence. Central flowers of triads about ⅓ stem-length from stem apex bloom before the two lateral flowers, with bloom sequence moving toward stem apex. As the first several central triad flowers bloom, the topmost flower of the stem does likewise. Later, blooming of the lateral triad flowers (which also moves up-stem) is joined by flowers on axillary branches. Apical flowers of branches bloom before flowers lower on the branch, if the branch has additional leaf axils. Typically, all leaf axils within the inflorescence produce buds/flowers or branches which produce buds/flowers, with extent of bloom being weather/moisture dependent. 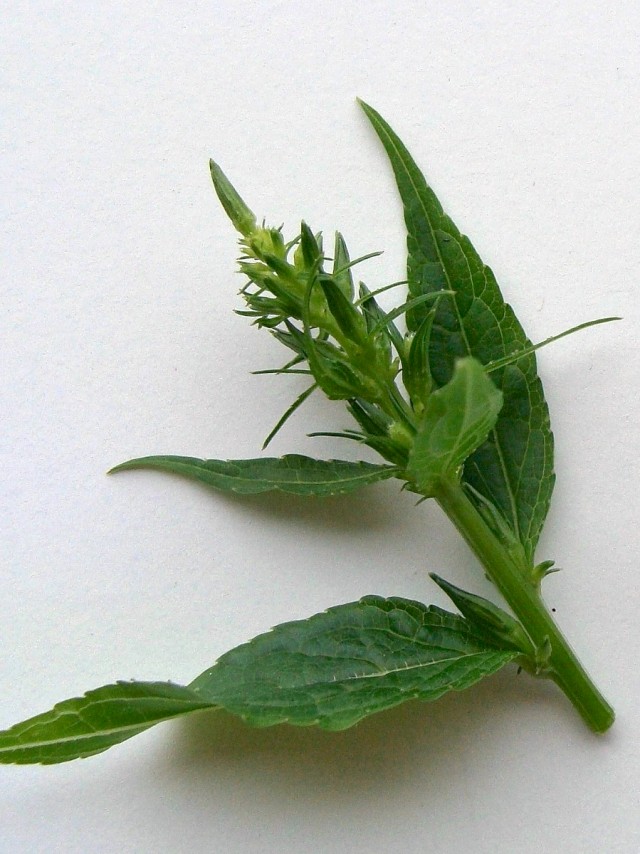 Corollas, to about 1 inch in diameter, have five ovate to lanceolate lobes that are sky blue to lavender (may be white), typically with a distinct white center and white spots where lobes meet above the white center. Color of upper and lower corolla surfaces are the same. Straight, thin, darkened lines (veins) on both sides of the corollas extend from tips of lobes to base of the corolla tube. Lobes tend to have wavy margins and frazzled pubescent tips. Sepals reflex sharply backwards. Individual flowers remain in bloom for about two days and a plant may be in bloom for a month or more, depending on soil moisture.

Flowers are perfect (with pistils and stamens). The ovary is totally inferior, with calyx and corolla attached to its apex. The prominent purplish, smooth, strongly exserted style has a broad down-curve before trending back upward so that its three-lobed stigma is positioned directly in front of flower. When styles are first visible, they are encased in a fuzzy pinkish skin which shrinks away as pistils mature. The 5 stamens, with dilated white bases, are attached to the base of the corolla and surround the base of the style. The filaments curve upward to strap-like, twisted, light yellow anthers. With ½ inch long styles and anthers positioned much lower, the anthers are thus located well away from the stigmas, which are not receptive to pollen for another day or so (to promote cross-pollination). The conical five-ribbed, light green, inferior ovary is rimmed by a short calyx tube and five linear lobes, often with a small appendage between each pair of lobes.

Photo 4: When flowers first open, straight styles are encased with a pinkish skin (left flower) which shrinks as pistils mature and styles twist upward (see flowers from left to right). Note that stigmatic surface is not yet exposed in these three flowers. Bud shows long, reflexed calyx lobes and frazzled tips of corolla lobes. 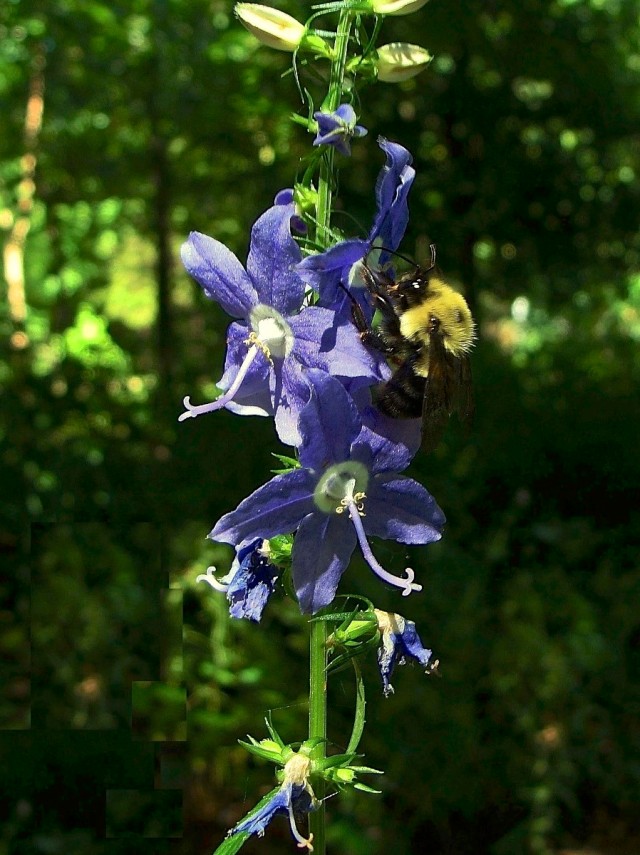 With fertilization, the ovary with three locules develops into a flat-topped capsule with persistent calyx lobes. Capsules are an inverted cone-shape with three ribbed sides and three flat sides. When capsules dry, stacked light tan seeds are released from round holes at the top of the three flat sides. The tiny seeds are flattened, smooth and oval.

Photo 6: With adequate moisture, flowers may continue to develop into late summer at which time seed capsules dry in unison.  Dry capsules have three round holes near their top from which seeds are easily shaken.  Photo in late September.

Tall bellflower, an upright annual or short-lived perennial (depending on when seeds germinate), may be welcome in a moist shady natural area or as a specimen plant in a rock garden. It has attractive foliage and beautifully shaped, typically blue buds and flowers in early summer. Bloom period extends over a month or more and, with adequate moisture, plants remain leafy into late summer. Flowers provide pollen to small bees and nectar to large bees.