Showy partridge pea (Chamaecrista fasciculata var. fasciculata)* of the Pea/Bean (Fabacaceae) family is an annual forb with asymmetrical flowers. It occurs in the U.S. from New Mexico and Kansas to South Dakota and Minnesota to Maine, thence south and east to the Atlantic and Gulf Coasts. In Arkansas, it is found statewide. The genus name comes from Greek meaning “low crest”, probably referring to new leaf clusters at stem apices that are crest-like. The specific epithet is from Latin meaning “in bundles”, possibly in reference to flower clusters. Other common names include “sensitive pea” and “sleeping plant” based on folding of leaflets when touched (sometimes) and during dark, cool or rainy conditions.

Showy partridge pea grows in various soils found in prairies, open woodlands, roadsides and recently disturbed or burned areas. It may occur in dense stands in disturbed or burned areas, but plant numbers decrease as other plants become established. It has a short tap root with auxiliary roots. Plants may grow to 2 feet or more tall. In crowded situations, slender stems are erect and unbranched, but in more open areas, long ascending branches grow from leaf axils. Stems and branches, which are light green in shady areas, have reddish overtones in sunnier areas. Actively growing apices of robust stems and branches are zig-zagged and are flattened due to leaves and inflorescence being aligned on only two sides. Showy partridge pea, as do other pea species, produces root nodules in which microorganisms fix nitrogen from the air for use by the plant. 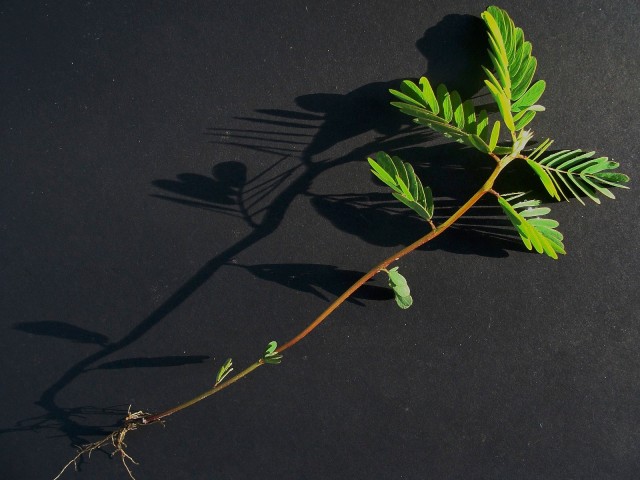 Leaves of showy partridge pea, widely spaced and alternate, are aligned on two sides of stems and branches. Two long lanceolate stipules, about ¼ inch long and 1/16 inch wide, grow from base of leaves. Leaves, which have straight rachises, are about 3¾ inches long and 1¼ inches wide with ¼ inch petioles that are slightly grooved on the upper surface. Leaves are even-pinnately compound with up to a dozen or more opposite leaflets. Closely spaced, entire (smooth margins), glabrous leaflets of equal size, on tiny petiolules, are narrowly oblong, ½ inch or more long and less than ¼ inch wide. Leaflets, with rounded bases and rounded apices with a tiny apical point, are medium to dark dull green above and light green below. The closely spaced leaflets are angled toward the leaf apex and are positioned so that upper leaflets slightly overlap lower leaflets (in Venetian blind style). Pinnate venation of the leaflets can be obscure, even with magnification. Mid-veins of leaflets are off-center. A bowl-shaped nectary is located on the upper side of each petiole.

The blooming period begins in early summer. Inflorescences consist of cauline fascicles (clusters) of flowers that occur between the aligned alternate leaves. A fascicle, while still in bud-stage, has two to six buds at varying degrees of development. Buds, covered by five light green sepals, have an elongated, conical, thin-pointed shape with five prominent longitudinal bulges toward their base. Buds are borne on thin peduncles, up to ½ inch long, that have several tiny, alternate and lanceolate bracts. One flower of a fascicle blooms at a time so that flowers may be in bloom all along stems and branches. With favorable weather, blooming may continue for several months as stems and branches continue to elongate and final flowers of fascicles bloom.

Photo 2: In this mid-July photo, flowers bloom all along erect stems while stems continue to grow at the apices.

Flowers, to 1½ inches across, are showy and irregularly shaped on ½ inch pedicels that have several alternate lanceolate bracts. A five-petal, bright yellow corolla consists of 1) two upper oval petals of the same size and shape, 2) a third upper ovoid petal of similar size with a tapered base, 3) a large oval flattened lower petal and 4) another lower petal that is smaller, cupped and may be right or left of the larger lower petal. Bases of the two upper oval petals usually have a reddish splash of color while lesser basal color may be present on several other petals. Ten dark maroon stamens are tightly grouped and oriented downward to right or left into the cupped lower petal, correspondingly also to right or left. The slender stamens, with a wider lower half and skinny upper half, are of unequal length from ¼ to ½ inch. (On some plants, stamens are yellow and not as large.) A light yellow slender style with attached ovary, originating to the side (right or left) of the stamen group, extends toward the large, oval, flattened lower petal (also right or left). The curved style, 3/8 inch long with a pointed stigma, tops a ¼ inch long straight, bean-like ovary. Five lanceolate, slightly broadened, light yellow sepals become splayed behind the flower’s corolla at anthesis. Flowers fade after one day.

Photo 3: Asymmetrical flowers have five petals of four different sizes and shapes. Ten stamens twist to the right or left into a cupped petal. The style of lower flower can be seen along with overlapped leaflets, venation and immature pods.

Photo 4: Display that includes two leaves showing upper (on left) and lower (on right) sides. Note bowl-shaped nectary on petiole of leaf on left. Expanded flower separates petals from sepals, stamen group and pistil (with bean-like ovary that develops into a pod or legume, not fully mature below).

With fertilization, a flower’s ovary quickly develops into a pod. Pods, initially finely pubescent and light green, are held erect with tips upward. A mature pod, about 2½ inches long and about ¾ inch wide, may contain as many as 20 seeds, each in a squarish segment of its own. Mature pods are dry and brown, and elastically dehiscent, splitting suddenly and flinging the seeds a distance of several feet. The seeds are flat, dark brown, and vary from oval to triangular to square.

In addition to showy partridge pea, a second species of the genus occurs in Arkansas, sensitive partridge pea (Chamaecrista nictitans var. nictitans). Sensitive partridge pea, also widespread across the state, is a much shorter, more branched, and less-erect plant to one foot tall with tiny flowers. Flowers (⅛ inch long) have four petals of fairly equal size (one is cupped) with a much larger lower petal, as well as only five stamens. Leaves bear stalked nectaries. And many cauline flower “clusters” occur between leaves with only one or two flowers per “cluster”. 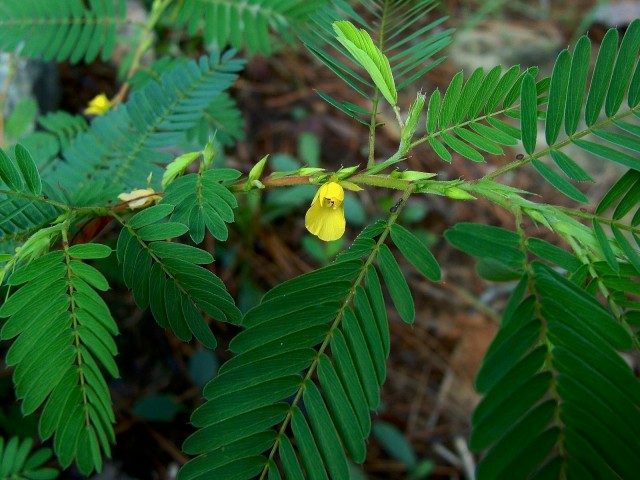