Butterfly Pea (Clitoria mariana) of the Pea/Bean (Fabaceae) family, the only species of the genus occurring in Arkansas, has large pea-shaped flowers. In the U.S., it occurs from New Mexico to Kansas, Nebraska, and Minnesota, east to New York and thence southward to the coasts. It occurs statewide in Arkansas. The genus name derives from the flower’s small keel, suggesting (to Linnaeus) the mammalian clitoris. The specific epithet refers possibly to the Virigin Mary or perhaps to the state of Maryland (although the type specimen was from Virginia, so this seems less likely). Another common name is Atlantic pigeonwings. Habitat includes sunny to partially shaded, well-drained pine or mixed woodlands or glades with acid soils.

Butterfly pea, a low-growing, trailing herbaceous perennial legume, has straight, slender stems and branches that grow from a small rough caudex and a long, slender, sparingly branched, spreading and tough root. Initial stem growth to 6 to 8 inches tends to be erect while ensuing growth becomes vine-like. Stems may reach 4 feet long. A stem may have two to five branches that ramble in various directions. Although branches are vine-like, without twining or tendrils, the plants sprawl along the ground or over and through other plants rather than climbing. Terete branches are yellowish green and glabrous. Ends of trailing branches in contact with soil may develop adventitious roots. Wiry dead stems remain over winter into the following spring. 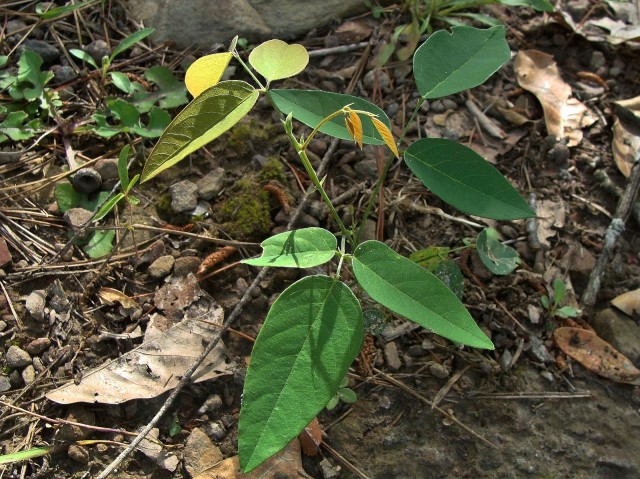 Photo 1: New, erect growth of an established plant. Photo taken in late May.

Nodes, arranged alternately about stems and branches (hereinafter both are referred to as “vines”), are spaced from 1 to 2½ inches apart lower on the plant; however, spacing gradually decreases to being almost side-by-side toward the tips of the vines. Each node bears two outward pointing, stiff stipules that subtend the leaf, vine or inflorescence that develops from that particular node. Generally, a node bears a leaf which subtends a vine (sometimes very short) or inflorescence. 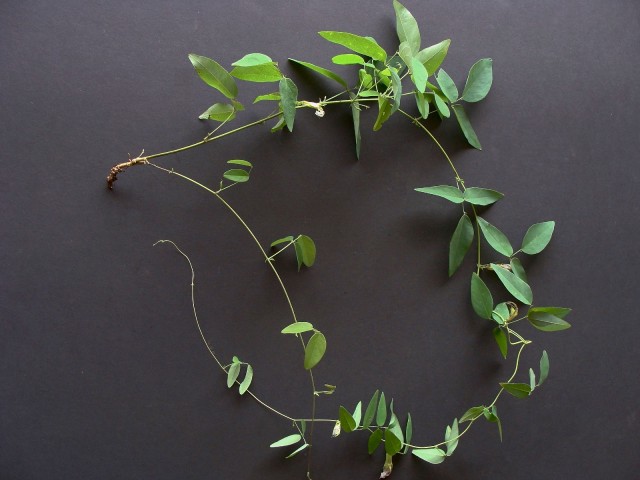 Compound, trifoliate leaves, with slightly swollen petiole bases, have three oblong-lanceolate leaflets with smoothly rounded bases. Leaflets are widest below the middle, from where they gently taper to a rounded apex terminating with a pin-point tip (mucronate). Length of petioles (from vine to lateral leaflets) is about three times as long as the length of the rachis (from lateral leaflets to terminal leaflet). Petioles are straight and rigid from vine to lateral leaflets, from which point it may assume a down-trending direction, but still straight and rigid. Leaflets, with very short petiolules (stalks), have a dull, dark green upper surface and lighter green lower surface. Leaflets are noticeably folded along mid-ribs and have entire (smooth) slightly revolute (turned under) margins. Largest leaves lower on the plant may be 5 inches long (including petioles) and 4 inches wide. Largest leaflets may be 2½ inches long and 1+ inch wide with terminal leaflets being somewhat larger than laterals. A pair of acicular persistent stipels (the “stipules” of a leaflet), to about ⅛ inch long, subtends lateral leaflets and another pair subtends the terminal leaflet. Sparse short hairs may occur on lower side of leaves, especially along the midrib. Venation is pinnate, with secondary veins being weakly depressed on upper leaflet surface and expressed on lower surface. 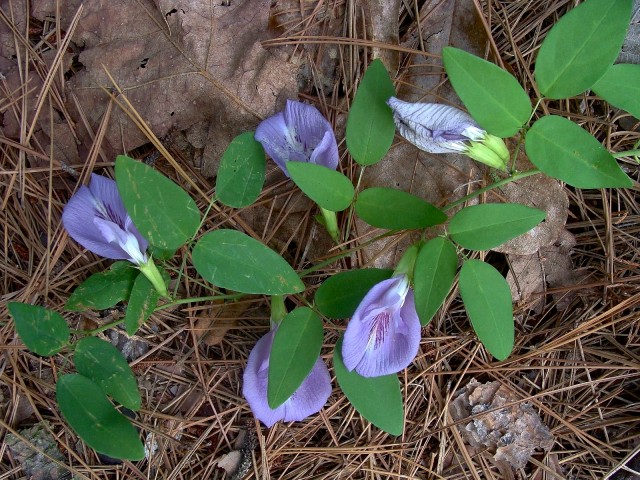 The inflorescence, at mid-summer, is subtended by a leaf at nodes along most of the vine beyond the lower erect portion. One to three flowers may share a peduncle and the same node may also support a second peduncle or a new vine. Flowers are on short pedicels that “knee-off” short peduncles at which point another pair of stipules is located. Buds nearing anthesis are long, skinny and pointed. Many flower buds do not develop fully. 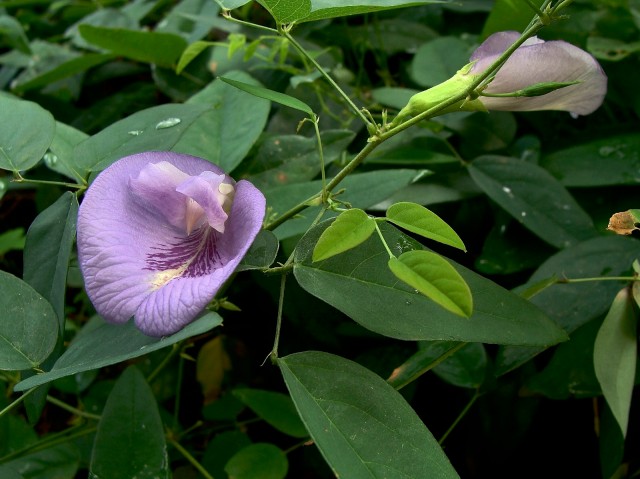 Flowers are pea-like with a large banner (or standard) and smaller wings and keel. However, unlike pea flowers, the banner is disposed downward (flowers resupinate) rather than erect. Butterfly pea flowers have a widely flared, deep-veined banner and a pair of upward-projecting, relatively small-eared, curvy wings at center of banner which enclose a pair of smaller petals that form the keel. The banner, with a widely flared “bowl” shape up to 2 inches wide, has purple streaking in its deepest portion along with a centered whitish patch toward the banner’s outer edge. The banner is folded along the middle and notched at the apex. The exposed portion of the wings loosely encloses a down-curved keel, with the keel’s open side below. Wings and keel petals have narrow stalk-like basal portions (claws), with claws of the keel being longer and more narrow than those of the wings. Petals of the keel and wings are adnate (joined) at about their mid-point and not joined above or below that point. The hood-like keel hides ten stamens, of which nine are fused to form a down-curved tube. The tenth stamen is free, that is, not fused to the other nine. The stamen tube encloses a down-curved pistil, except for its slightly exserted stigma. Keel petals have a folded-over margin and an internal flange which forms a downturned “channel” which tightly grasps the stamen tube. Flowers have a long flattened calyx tube with five triangular lobes, subtended by two small, hugging bracts. 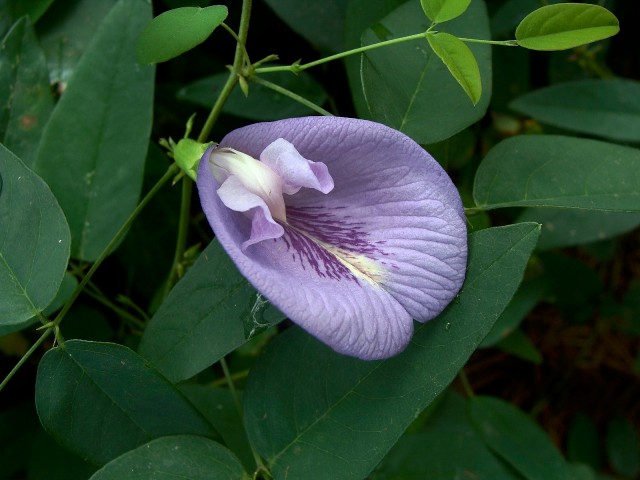 Flowers of butterfly pea have an overall lavender color, the exposed portions of wings and keel with a lighter shade and the hidden clawed portions white. The stamen tube comprises white filaments tipped with light yellow anthers. The pistil, hidden within the keel, has a white style and a small knob-like, light yellow stigma. The style, with tiny hairs on the convex side, connects to an elongate, flattened, yellowish-green ovary. The calyx tube is light green. 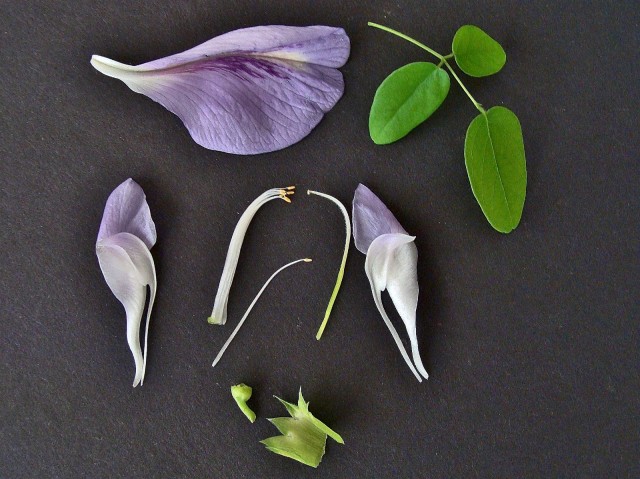 Photo 6: Display of flower parts and a leaf. Curved style (connected to yellowish-green ovary) is to right of stamen tube with tenth stamen in between. Note adnate wings and keel petals on right and left.

With fertilization, flattened, oblong and smooth pods develop which contain up to about six seeds. Mature pods, two or more inches long with a long curved tip, split in late summer along one side and become twisted so that sticky seeds are released. 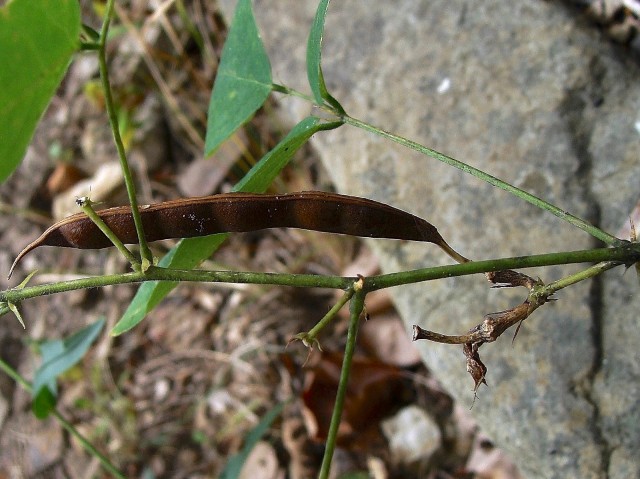