Baldwin’s climbing milkweed (Matelea baldwyniana) and Anglepod milkvine (Matelea gonocarpos or Gonolobus suberosus depending on which authorities are followed) of the Apocynaceae (Dogbane) Family, formerly of the Asclepiadaceae (Milkweed) Family, are herbaceous, perennial, trailing to climbing vines.

These vines grow in various rocky, well-drained soils in open woodlands, ravines and overgrown areas.  Each plant has one to several stems that may reach 20 feet in length, but, with twinning, actual height may be significantly shorter.  Both have rounded stems, white sap and opposite leaves on petioles.  Leaves are broadly ovate to orbicular with smooth edges, an acute to tapered tip, and heart-shaped base.  Inflorescences, present from April to June, are loose clusters on long peduncles that grow from the nodes.  Leaf blades may be six inches long and slightly less wide.  Flowers have a disc-like central column bearing five anthers.  As in all North American milkweeds, the pollen is not granular, but cemented into ten packets called pollinia.  When removed from their anthers, the pollinia are seen to be connected in pairs by two wiry threads to a tiny clip. It is this clip that is inadvertently engaged by visiting insects and carried from flower to flower. If a pollinium is subsequently inserted into a stigmatic slit, pollination is effected.  Seed pods, which tend to be few in number, contain densely packed circular, flattened seeds with many long white hairs, typical of most milkweeds.  As dry pods open, wind pulls seeds out of the pods by the hairs.

Baldwin’s climbing milkweed and anglepod milkvine are both nice plants for a home garden.  Plants can be easily grown from seed and do well, even when growing within the confines of an openly branched tree.  They do not multiply by root and do not seem to multiply significantly by seed.  Both plants have large attractive leaves and interesting flowers and seed pods.  Both serve as food source for Monarch caterpillars, nymphs of Milkweed Bugs and the colorful (although voracious) Milkweed Tussock Moth caterpillars.

Baldwin’s climbing milkweed, also called Baldwin’s milkweed, Baldwin’s milkvine or white climbing milkweed, has a rather limited distribution, occurring in the U.S. from eastern Oklahoma through western Arkansas to southwestern Missouri and from widely scattered localities from Mississippi to western Georgia and the Florida panhandle.  Top and underside of leaves are equally medium green.  Leaves feel limp and flannel-like.  Overall the plant is densely hairy with short and long hairs, especially noticeable along stems and petioles.

Inflorescences, present from April to June, occur in the lower to mid-portion of plants, with 15 or more flowers in a cluster.  Flowers have five ½”-long and ⅛”-wide twisting white petals joined at the base.  The calyx is formed by five short ⅛”-long, lance-shaped spreading lobes.  Seed pods, elongate and round in cross-section, are covered with rough bumps topped by soft-prickly points. 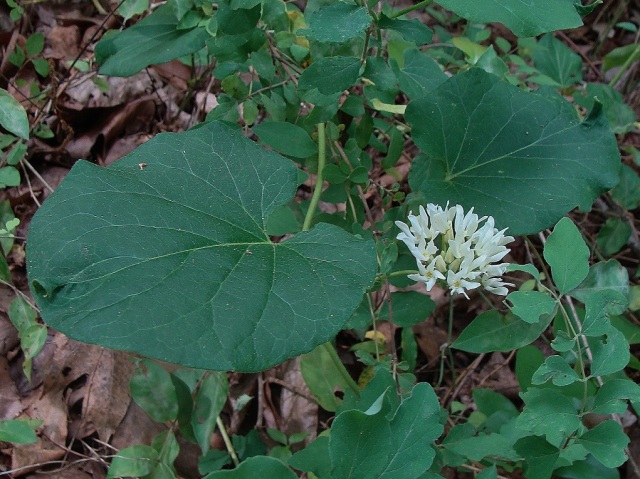 Photo 1:  Leaves and flower cluster of Baldwin’s climbing milkweed in late May. 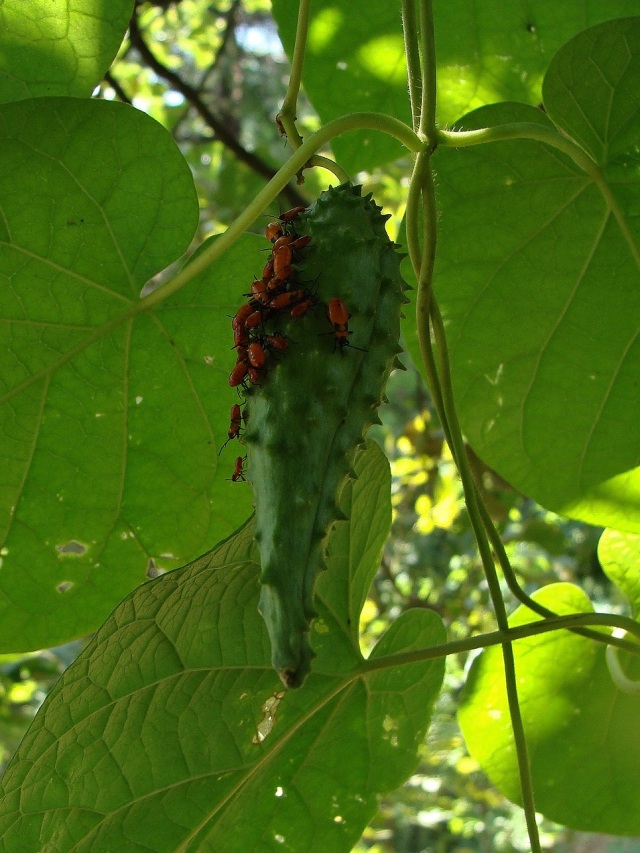 Photo 2:  An immature seed pod of Baldwin’s climbing milkweed with milk weed bugs feeding on seed through skin of pod.  Note seam of pod where it will split open at maturity. 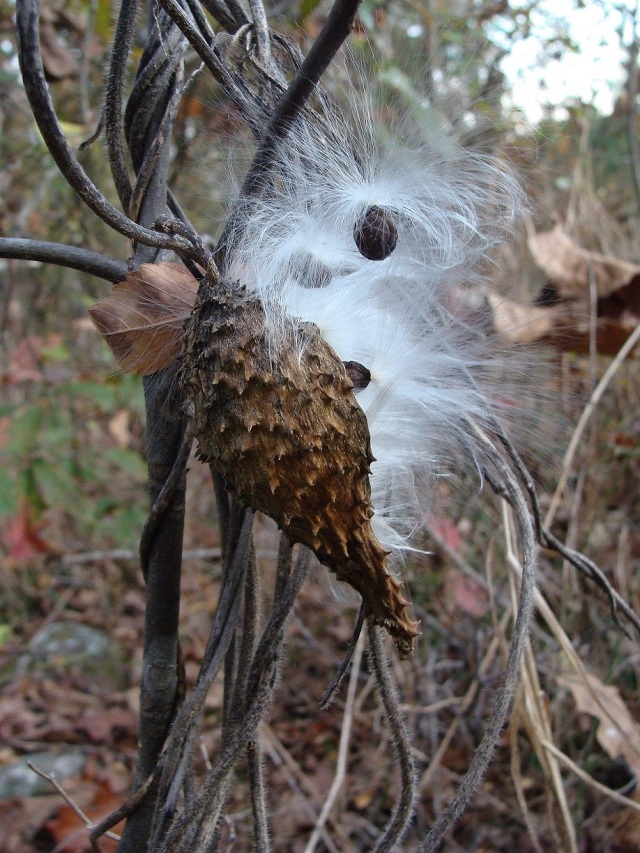 Anglepod milkvine, also called anglepod, anglepod milkweed or angular-fruit milkvine, occurs throughout the southeastern U.S. from Texas to southeastern Kansas to southern Illinois and Indiana to Maryland and southward.  In Arkansas, it occurs statewide.  Plants have short hairs, most noticeable on stems.  Leaves, dark green on top and lighter green on bottom, feel slightly rough.  Stems, petioles and leaf veins may show purplish shading which fades with maturity.  Inflorescences, present from April to June, occur in the upper portion of plants and consist of two to ten greenish star-shaped flowers in a cluster.  Flowers have five spreading, elongate-triangular petals about ¾” long and united at the base.  The central column is green on top (some flowers may be purplish) and surrounded by a large, yellowish nectary.  The calyx is formed by five recurved green sepals about ¼ the length of petals and of similar shape and color.

Pods, about 4″ long and 1½” wide, are five-sided with two wide sides and three narrow sides, each separated by a pronounced angular ridge, hence its common name.  Dry pods split along the middle of the inner narrow side. 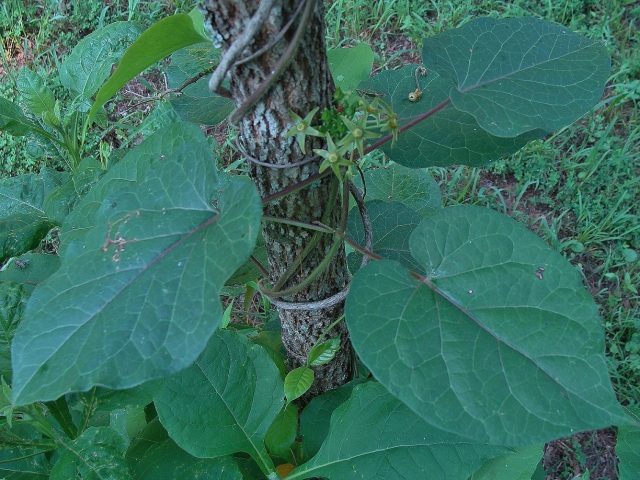 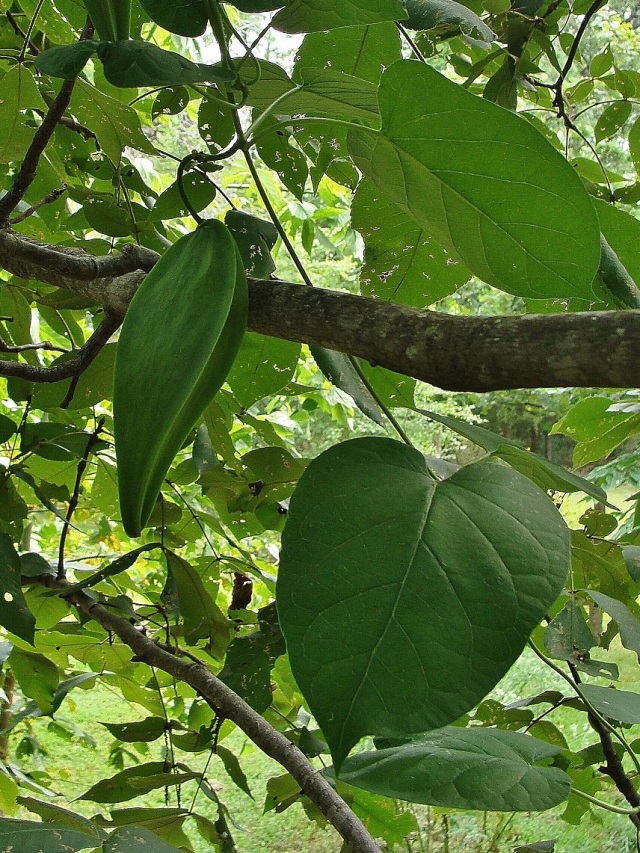 Photo 5:  Seed pods of anglepod milkvine within a hickory tree.  A wide side and a narrow side of pod are shown.

Photo 6:  A drying pod of anglepod milkvine in early November.  The two wide sides of pod are shown.

Other Similar Milkweed Vines In Arkansas

Sandvine or honeyvine (Cynanchum leave), a common garden weed, occurs throughout most of Arkansas, but is less common in the core mountainous areas of the Ozarks and Ouachitas.   The flowers of sandvine, occurring in clusters, are small (the smallest of the milkweed vines in Arkansas) and white.  The leaves are generally smaller and with a longer tapered tip than Baldwin’s climbing milkweed and anglepod milkvine, and the seed pods are smooth. Sandvine is one of very few North American milkweeds that lacks milky sap.

Climbing milkweed (Matelea decipiens) occurs widely across Arkansas, but it is more infrequent in the Mississippi Alluvial Plain and West Gulf Coastal Plain, and nearly absent from extreme western Arkansas where Baldwin’s climbing milkweed is predominant.  The pods resemble those of Baldwin’s climbing milkweed, being covered with bumps with short hard points, but the inflorescences are clusters of rusty red or maroon flowers. The two species are so similar vegetatively and in fruit that they can be distinguished only in flower.

Twinevine (Funastrum cynanchoides subsp. cynanchoides), a primarily southwestern and coastal plant, is the least common of the milkweed vines in Arkansas, occurring primarily along sections of the Arkansas, Red and White Rivers.  Twinevine most closely resembles sandvine vegetatively, although the leaves are often a little broader with less tapered tips.  The flowers, also occurring in clusters, are white to pinkish and much larger and showier than those of sandvine.  The pods are smooth and also more abruptly constricted toward the tip than those of sandvine.