Round-lobe hepatica (Anemone americana) of the Buttercup (Ranunculaceace) family, also called liverleaf*, is one of the first non-woody plants to bloom in spring.  The species is found in the U.S. primarily from Mississippi, Alabama, and northern Florida, north through New England, and then west through the Great Lakes region.  A separate population center is found in the Interior Highlands of Arkansas and southern Missouri.  In Arkansas, it is found throughout the central Ozarks and Ouachita Mountains.  The species has long been separated from the genus Anemone under the names Hepatica nobilis var. obutsa or Hepatica americana.  The name Anemone is derived from a Greek word for “wind” as used in “windflower,” the general common name for the group. Round-lobe hepatica occurs in woodlands with consistently moist, well-drained, rich to rocky acidic soils in low lying to sloped areas.  Year-round partial shading is preferred, especially in summer.

Round-lobe hepatica is a low-growing, stemless evergreen perennial with basal leaves and erect flowers growing directly from a caudex.  When in flower, plant height may reach 6 inches.  As plants mature from year-to-year, they enlarge while retaining their overall circular shape.  Flowers are at the center of the plant with leaves mostly surrounding the flowers.  Roots are fibrous.

New leaves in spring become evident after anthesis (bloom).  They appear individually and unfurl on slender, long-haired, purplish petioles.  Leaves, about 3 inches long and equally or more wide, have entire (smooth) margins and are thick and leathery.  The round-lobe hepatica leaf has three distinct round lobes with rounded apexes, somewhat like a shamrock.  The junction of the central lobe with the lateral lobes is deeply incised.  Petioles, up to 6 inches long, are attached at the base of the leaf where the blade is strongly indented, giving a cordate shape.  New leaves are sparsely hairy on upper side and densely hairy beneath, but hairiness decreases as leaves age.  Leaf color in is mixture of various greens and purples with lower surface and veins often showing more purple.  In fall and winter, the preceding season’s leaves become darker green to purple on top and purple on the underside, eventually withering after blooming and the appearance of new leaves the following spring.  With age, petioles become wire-like and twisted.  Leaf veins are palmate. 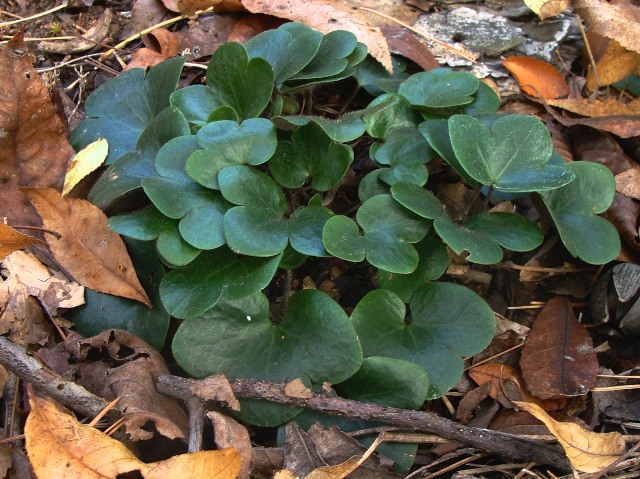 Evidence of the inflorescence is first seen as acute, stout projections growing from the caudex.  These projections are covered by purplish, acute, and glabrous caudex bracts that are firmly compressed over each other.  In late winter to early spring, a flower emerges from behind each caudex-bract.  Generally, with flowers folded down at the top of pedicels, the bent portion of the pedicel emerges first followed by a green floral bract which loosely covers the flower.  Pedicels straighten and flowers quickly open.  However, with strongly varying spring temperatures, sepals may appear first.  Floral bracts, immediately below the sepals, are obovate and hairy on the outside, with parallel veins.

Photo 2:  Each stout purple projection at center of plant will produce a flower from behind each caudex bract. 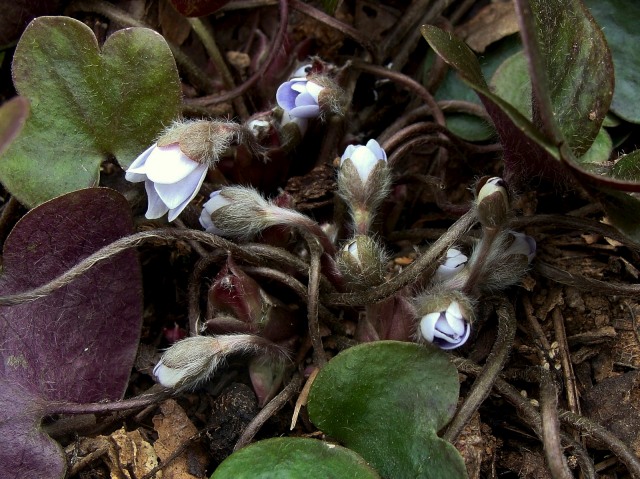 Photo 3:  Several flowers emerging from behind caudex bracts.  Note hairiness of pedicels and floral bracts and purple color of underside of leaf.

Flowers, up to 1 inch across, typically have 6 petal-like sepals.  The sepals are blue and occasionally white to pinkish with a greenish inside base.  Sepals are oval to obovate with rounded tips.  The comparative size of floral bracts and sepals varies, but typically the floral bracts are larger than sepals.  Twelve or more white stamens bearing white to light yellow, round anthers surround a cluster of about twelve greenish, elongated, round-pointed carpels.  White stigmas are not elevated but attached directly (without styles) at the carpel tips.  Individual flowers last about two days, but with flowers blooming sequentially and, especially when colder temperatures persist, plants may be in bloom for several weeks.

Photo 4:  The bent portion of the pedicel can be seen to be emerging first (red arrow).  Floral bracts of this plant are larger than the sepals.  New leaves have not yet emerged.

With fertilization, carpels double in size while retaining the same shape.  As seeds mature, floral bracts remain green.  Mature fruits (1-seeded achenes), with soft hairs on upper portion, have a pointed apex and a rounded base. Seeds have a whitish external appendage (elaiosome).  Seed dispersal is by ants that harvest and transport the seeds for the purpose of providing nourishment to their colonies via the elaiosomes, a process called myrmecochory. 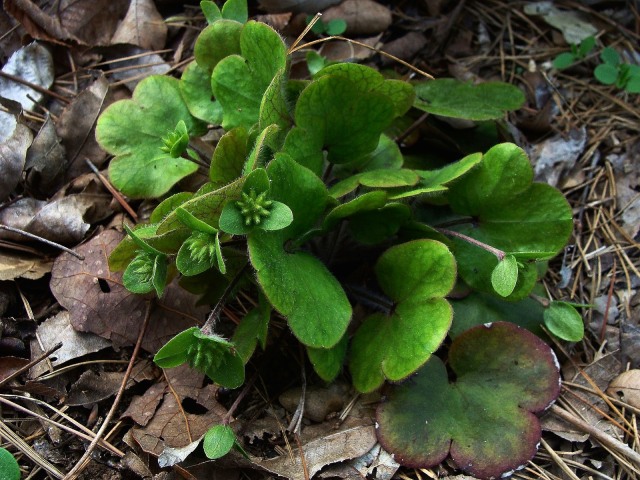 Sharp-lobe hepatica (Anemone acutiloba), the other hepatica species that occurs in Arkansas, is quite rare in the state, known only from Newton and Stone Counties in the Ozarks.  Sharp-lobe hepatica has leaf lobes and floral bracts that are more pointed at their tips.