Net-leaf leather-flower (Clematis reticulata*) of the Buttercup (Ranunculaceae) family is a perennial herbaceous vine found in portions of the Southeastern U.S from eastern Texas and Oklahoma to South Carolina and Florida.  In Arkansas, the species is recorded from north-central and southwestern parts of the state.  It is found in mesic to dry, sandy to rocky soils of open upland woodlands and thickets.  Nomenclaturally, Clematis derives from the Greek word for climbing or vining plants.  The specific epithet is from the Latin word meaning “netted,” and relates to the pattern of the plant’s prominent leaf veins.

A mature net-leaf leather-flower plant produces one to several fast growing vines (stems) from a deeply set, fleshy, stubby root.  Stems grow upright for several feet.  Fascinating (unique?) tendril-like stalks of the leaves and especially the leaflets coil around and latch onto surrounding twigs as the vines grow more or less upward depending on support.  When support is lacking, stems ramble over and through themselves and other vegetation so that the plant becomes well anchored.  Stems, glabrous and round with minor ridges and up to 12+ feet long, become reddish and somewhat woody early on.  Dead stems often remain into the next growing season but new growth arises from the roots.

Principal leaves are odd-pinnate to a foot or more long and equally wide, with leaflets typically bearing secondary leaflets to become twice compound.  Distal rachises and petiolules (leaflet stalks) become long and twisted and can become especially tendril-like by abortion of their leaflet blades.  Shape of leaflets varies, with smaller leaflets being ovate to elliptic while larger leaflets are two-lobed (mitten-shaped) or three-lobed with the central lobe largest.  Reticulate (net-like) veins are incised on the adaxial (upper) side and raised on the abaxial (lower) side.  Leaflets, a dull medium green adaxially and light green abaxially, are leathery.  Larger leaflets may be 3+ inches long and 2+ inches wide.  Leaf and leaflet size decrease toward the extremities of the plant.

Photo 1:  Lowest leaves of this young plant are simple (arrow), leaves of the next higher pair are three-lobed, and upper leaves are odd-pinnate with simple leaflets.  Photo taken April 21st. 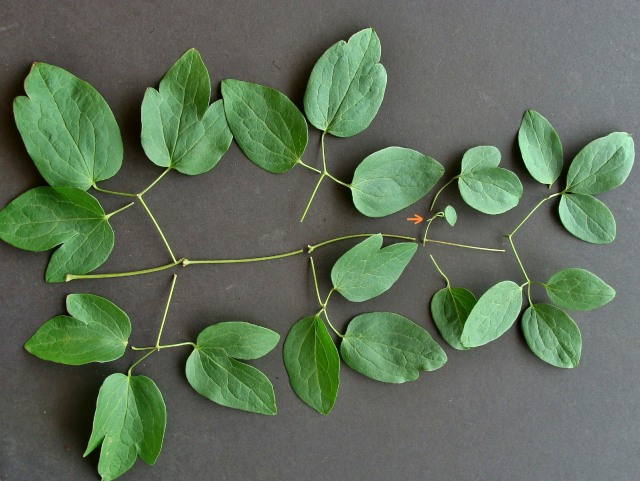 Early (lower) inflorescences consist of single flowers on long ascending pedicels growing directly from leaf axils of main stems.  Higher on plants, short axillary branches may produce clusters of flowers on short ascending pedicels.  Typically, pedicels have a pair of small simple leaves in their lower third.  Almost all leaf axils, regardless of leaf size or position on plant, produce rudimentary flower buds, but many buds do not develop fully. 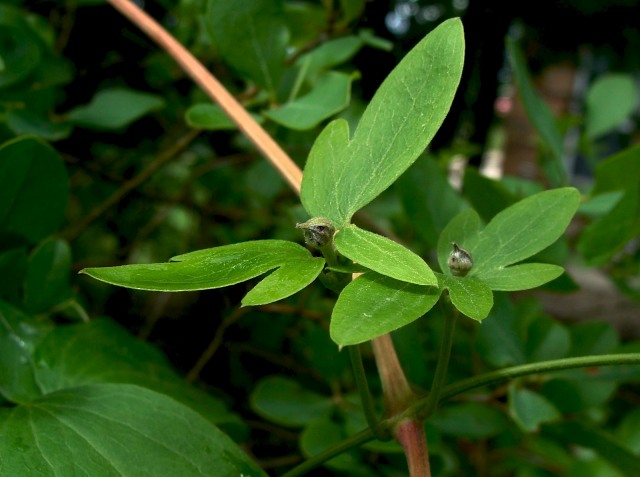 Photo 3:  Flower buds growing on pedicels from leaf axils of the somewhat woody primary stem.  In photo, stem is hanging downward so that secondary stems with flower buds twist up from “below” leaf axils.

Ascending pedicels bend sharply downward at their upper end so that the plant’s bell-shaped (campanulate) flowers point downward.  Flowers have four thick, straight-edged sepals (no petals) which are widest at the pedicels then narrow sharply to an acute tip–thus buds are sharply pointed.  Sepals have a central rib, especially prominent near the pedicel, that extends to the tip.  Lesser ribs align with the sepals’ edges which are tightly pressed together.  Sepal color near the pedicel is a dark purple to pale lavender which fades into white and then light green at the tip.  Sepals are whitish to greenish on the inside.  As flowers reach anthesis, tips of sepals recurve to expose the ends of tightly clustered stamens that tightly surround styles and stigmas of a tight cluster of pistils.  Stamens, narrowly linear, have white filaments covered with minute white hairs with elongate, similarly colored hairy anthers.

With flower maturity, sepals and stamens are discarded so that previously mostly hidden white pistils with their white ovaries become prominent on a naked receptacle.  Styles enlarge as the ovaries mature and white hairs found along one side of the styles elongate so that, with maturity of the seed-like fruits (1-seeded achenes), each flattened, rounded, beaked achene has a persistent plumose “tail.”  Achenes and tails form a round, airy “seed”- or fruiting-cluster, several inches in diameter, that is persistent into spring, unless dispersed by wind or wildlife.

Net-leaf leather-flower is a well-behaved vine that should find favor in a garden setting.  It will do well in most upland soils in partial shade with average moisture.  Once established, it is drought resistant.  With persistent seed clusters, it is a year-round attraction.  Beware though, stems growing along the ground are tough enough to trip a person.

Five other species of leather-flower have been reported from Arkansas; namely, swamp leather-flower (C. crispa), white-leaf leather-flower (C. glaucophylla), Pitcher’s leather-flower (C. pitcher), pale leather-flower (C. versicolor), and vase-vine (C. viorna).  Characteristics of C. reticulata that help in its identification include habitat, reticulated leaf veins, flower color and flower shape.  Three additional species of Clematis are also known from Arkansas (two native [C. catesbyana and C. virginiana] and one introduced [C. terniflora]), but these are true woody vines that have abundant clusters of small white flowers, bloom in late summer/fall, and are generally referred to by the common name “virgin’s-bower.”

*The Clematis reticulata “complex” is currently under revision by Dwayne Estes (Austin Peay State University & Botanical Research Institute of Texas) and collaborators, including Theo Witsell (Arkansas Natural Heritage Commission).  In Arkansas, the complex is expected to be split into at least several additional species.