Joe Pye weed (Eutrochium purpureum*) of the Aster (Asteraceae) family occurs in the U.S. from Louisiana and Oklahoma, north to South Dakota and Minnesota, thence east and south to the borders.  In Arkansas, this species occurs in the Ozark and Ouachita Mountains, higher elevations of the Arkansas River Valley, and on Crowley’s Ridge.  Previously, this species was classified as Eupatorium purpureum, a name still recognized by some authors.  (Such botanists are known in the trade as “lumpers”.) Preferred habitat includes prairies, woodlands, thickets and stream margins with mesic soil and partial to full sunlight.  Other common names include sweet-scented Joe Pye weed, green-stemmed Joe Pye weed, and kidney root.  These common names, respectively, are based on a pleasant scent from flowers and crushed leaves, on stems that are mostly green, and on the plant’s roots having been used to treat kidney stones.  For a link to a review of the name “Joe Pye”, see footnote.

Joe Pye weed is an herbaceous, clumping, erect perennial.  Stout main stems, that may reach 7 feet tall, grow in tight clumps.  Lateral stems arise from the uppermost leaf axils of main stems.  Main stems and lateral stems are green except for dark purple shading at the base of petioles and on stem nodes.  The entire plant is mostly glabrous (hairless).  The upright stems, as the growing season progresses, often lean outward from the plant’s main axis, but remain mostly erect.  The root system is shallow and fibrous.

Leaves grow from swollen nodes that are uniformly and widely spaced along half-inch-diameter terete main stems.  Leaves, up to 10 inches long and 3 inches wide, occur in whorls of three to five, with four being typical.  The largest main-stem leaves, on the lower two-thirds of the plant, have margins that are entire near the base and coarsely serrated beyond.  Leaf blades gradually taper to an elongated tip (acuminate tip). Leaf blades taper quickly toward the base and then become wing-like onto the petiole.  Whorled leaves on the upper third of the plant quickly decrease in size and become lanceolate with lightly serrated margins and short petioles.  Leaves, somewhat crinkled throughout the plant, are a dark dull green above and a lighter dull green below.  Pinnate veins are recessed above and raised below.

Photo 2:  Display showing upper and lower surfaces of whorled leaves along with much smaller leaves in a compound panicle.  A glabrous stem and leaf node are also shown. 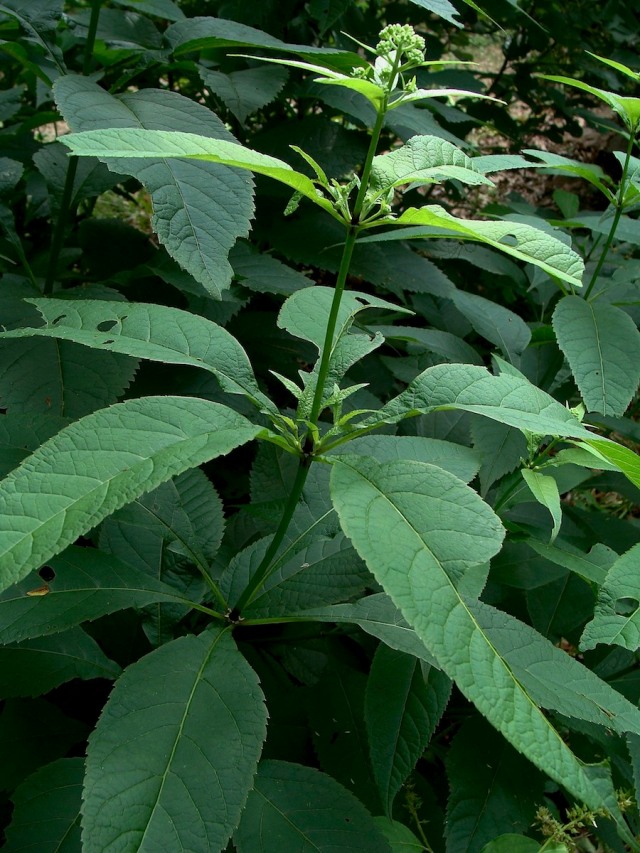 Inflorescences are restricted to the upper one-fifth of main stems.  In early summer, pale pinkish to purplish flower heads are produced in large, loose, convex-topped, compound panicles at the ends of a terminal stem and a number of lateral stems.    The uppermost group of compound panicles has a central stem growing straight up from the center of the uppermost leaf whorl along with lateral stems growing from leaf axils.  At several lower whorled-leaf nodes, some or all leaf axils may produce panicles on lateral stems.  Lateral stems, up to about 2 inches long, of the uppermost group of panicles and of lower panicles are positioned about 50 degrees off the main stem.

Photo 4:  A plant in full bloom in early July.

A compound panicle may be composed of several to about five individual panicles.  Small lanceolate leaves occur at the base of the lowest panicles and additional smaller bracteal leaves may occur within compound panicles.  A panicle may bear 50 or more separate flower heads so that the uppermost group of panicles may have 250 or more flower heads.

Each elongate, tubular flower head, about one-half inch long and one-sixteenth inch wide, bears up to about six disk florets on very short thin pedicels.  Florets of each head are enclosed by an elongate involucre composed of appressed linear bracts (phyllaries) of differing lengths.  Florets have five flared, triangular lobes.  A long, deeply split, white, thin and twisting style (bifurcated style) is prominently exserted while stamens are hidden (inserted).  The corolla, attached directly to the upper end of an elongate ovary, is surrounded by a pappus of numerous fine bristles appressed to the corolla tube.  Like the corolla, the pappus (morphologically a highly specialized calyx) is attached to the top of the ovary.  (There are no ray florets.) 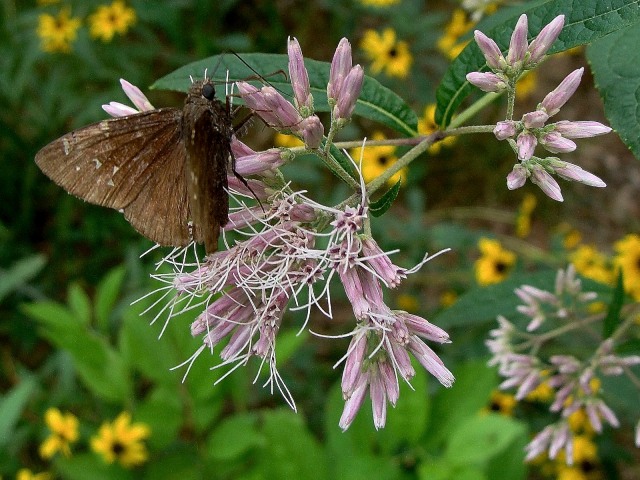 At maturity and fertilization, each ovary enlarges and hardens to become an elongate achene with fine bristles at its top (i.e., the pappus).  With drying, the bristles fluff up, allowing the 0ne-seeded achenes to be dispersed by wind.

For a larger wildflower garden or naturalized area, Joe Pye weed may be appropriate.  It may add significant structure and texture with its large, uncrowded, whorled leaves on tall stems.  It has showy flowers.  The number of stems increases from year to year, but these remain in a tight clump.

*  Two varieties of Joe Pye weed (E. purpureum var. purpureum and E. purpureum var. holzingeri) are believed to occur in Arkansas.  They are separated by leaf undersurface pubescence: var. purpureum is glabrous or sparsely hairy along veins; var. holzingeri is densely and evenly hairy.  However, inventories in the state have not traditionally separated them, so their ranges are still obscure.  A second species of Eutrochium in Arkansas is hollow-stemmed Joe Pye weed (E. fistulosum) which has 4 to 7 leaves per whorl and hollow stems that are purple to purplish with a bluish-white powdery bloom.  It occurs along streams, in bottomland forests, or in marshes.

Footnote:  For review of the name “Joe Pye”, see: