Dwarf larkspur (Delphinium tricorne) of the Buttercup (Ranunculaceae) family has distinctive early spring flowers that are often dark bluish-purple (or sometimes white).  Other common names include spring larkspur and rock larkspur.  This species is typically found in rich alluvial deciduous woods and wooded rocky slopes in shady to partially sunny sites with dry to mesic soils.  It is found in the U.S. from Nebraska to Pennsylvania and from Oklahoma to Georgia.  In Arkansas, it is found primarily in the Interior Highlands of the northwestern half of the state, with scattered occurrences in better drained sites of the Mississippi Alluvial Plain.  The genus name “Delphinium” comes from a Greek word for “dolphin” based on the shape of flower spurs and buds as viewed from the side.  The specific epithet refers to the horn shape of the three follicles that constitute the fruit.

This herbaceous perennial has an ephemeral nature in that it has new basal growth in mid-winter, blooms in early to mid-spring and then goes dormant in late-spring.  Roots are elongate, shallow and branched pointy tubers with long fibrous roots.  The upper ends of the tubers have growth points from which open clusters of basal leaves and weakly erect flowering stems (peduncles) grow.  Stems, in early spring, are straight and puberulent (covered with almost imperceptible downy hairs).  Cauline leaves, on stems up to 2 feet tall, are limited to a few alternate leaves along the lower portion of stems.  The uppermost of these few cauline leaves subtend single flowers while higher up single flowers are subtended by narrow, linear, pointed bracts that decrease in size up-stem.

Basal leaves that first appear in mid-winter and those basal leaves that grow later have the same appearance, and the cauline leaves, too, are similar, although these leaves may be smaller.  Basal and cauline leaves, which remain vibrant throughout the bloom period, have an overall orbicular shape that is palmately compound (trifoliate).  The three leaflets are then deeply incised to form wedge-shaped lobes which in turn are futher deeply cut.  The central leaflet of a leaf tends to be incised into three lobes and the two lateral leaflets tend to be incised into two lobes.  The leaf blade may appear to be five-lobed.  Smooth margins of all lobes are interrupted by additional minor lobing. 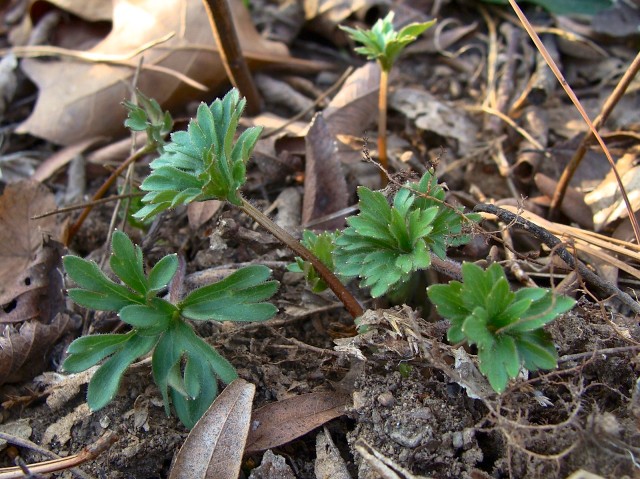 Photo 2:  Appearance of trifoliate basal and cauline leaves are similar.  Early pubescence is lost as the season progresses.  Photo taken at end of March.

Pedicels (stalks of individual flowers) grow upward from the peduncle in raceme fashion at about 45 degrees.  Racemes, to about 8 inches long, have up to about 25 loosely arranged flowers.  Peduncles and pedicels tend to be densely covered with short pubescence, which falls off with age.  Light green flower buds on long pedicels are round in cross-section and stubby.  Flower buds have an exterior that features flattened, indented faces with five rounded bumps and a backward projecting spur.  Flowers typically have dark bluish-purple sepals and petals, although lavender to white flowers may occur and the upper two petals of dark blue flowers may be whitish.  Sepals, the most prominent part of the flower, are broad and petal-like with a gently tapered tip.  Sepals have an indented area near their apices that corresponds to the bumps that were present on the bud’s face.  Along with the upper sepal, which bears the long upward-angled, backward-pointing tubular spur, two sepals are opposite the flower’s center and two lower sepals are down-angled to either side.  The spur contains nectar that is pilfered by bumblebees by cutting into the spur and legitimately taken by smaller bees that enter from the front and typically effect pollination.  At anthesis, the corolla faces slightly downward, and the backward projecting spur is angled upward at about 90 degrees to the pedicels.  The soft half-inch-long spurs have a diameter that gradually decreases to a blunt tip.  Flowers have small round calices with a small elongate bract at each side.

In addition to the prominent sepals, flowers, up to 1 inch across and 1½ inches long, have two upper petals, two lower petals, a group of stamens and three pistils.  The two upper petals, which may be whitish or the same color as the sepals, are upward flared and overlapping.  The two lower petals, same color as sepals, are larger than the upper two petals, lobed and down-flared with numerous whitish, tangled hairs on their outer surface.  Stamens, grouped behind the lower petals (when viewed from front of flower) have whitish filaments and black dangling anthers.

Photo 3:  Flower buds, as seen at left as well as in right foreground, suggest the shape of a dolphin, the source of the genus name Delphinium.  Sepals and petals of this particular plant are all the same color.  Stamens can be seen behind the two lower hairy petals.

With fertilization, the three ovaries produce three free-standing, bean-pod-like follicles that are joined at their bases.  The half-inch-long glabrous follicles, with long pointed beaks, arch backward away from their common center, with sutures bowed-up.  When mature and dry in mid-spring, follicles split along sutures and small, black, smooth seeds are released.  With the fruiting cycle completed about late May, plants quickly return to dormancy.

*Another widespread larkspur in Arkansas is Carolina larkspur (Delphinium carolinianum), with three subspecies in the state.  It also typically has dark blue or white flowers, but flower stems are up to 4 feet tall and plants are found in sunnier, drier sites.  In mid-winter, the basal leaves of the most common and widespread variety of D. carolinianum, var. carolinianum, and D. tricorne can be easily confused, both being trifoliate and similarly lobed.  However, in the case of D. carolinianum var. carolinianum, lobes of its later leaves become increasingly narrow and numerous.