Self-heal (Prunella vulgaris ssp. lanceolata*) of the Mint (Lamiaceae) family is a perennial herb found in generally moist soils.  It occurs as a native species throughout the lower 48 states and Alaska.  In Arkansas, it occurs throughout the state.  The origin of the genus name is not known.  The specific epithet is from Latin for “common” as in “widespread”.  The subspecies name is from Latin, meaning “lance-like”, a reference to the leaf shape.  Other common names include lance-leaf self-heal and heal-all.  Self-heal grows well in various moist soils with full or partial sun in prairies, woodland borders and roadsides.  It was widely used by Native Americans and early settlers for medicinal purposes and it is still used as a medicinal herb. 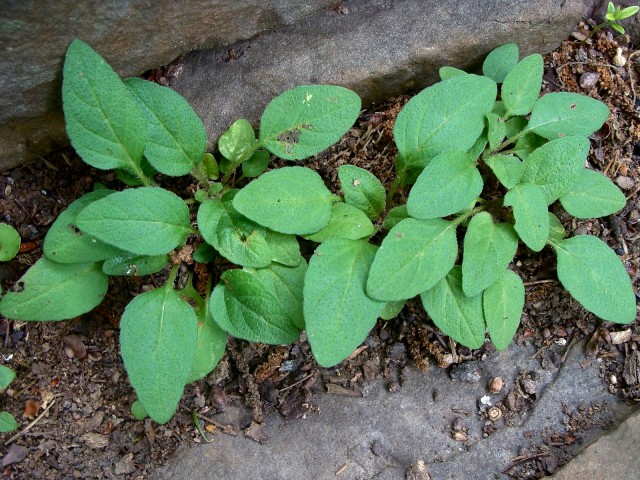 Photo 1:  A mature plant prior to stem development.  Leaf blades, marked with glandular dots, have slight serrations on their margins.

Self-heal has shallow, light tan, long fibrous roots that radiate from a small central caudex, and the plant may also produce short roots from the lowermost portion of the stems that are in contact with soil.  Plants may have one to a half-dozen mostly erect stems with a final height from 6 to 12 inches or more.  Secondary stems may grow from upper leaf axils of main stems.  Stems are square in cross-section (a characteristic of mints) with sharp corners.  Width of stems, at about 1/16 inch, is fairly uniform from stem base to uppermost leaves.  Stems are a light green, but the lower portion may be reddish.

Photo 2:  In mid-May, this plant in a sunny site has 20 stems with minimal secondary stem growth.

Basal and stem (cauline) leaves have a similar appearance although basal leaves tend to have longer petioles in relation to leaf blade and may have more prominent glandular dots.  Cauline leaves, opposite and widely spaced, are petiolate except for the uppermost leaf pair, which have variably shaped “petioles” (see below).  Blades, broadest below mid-leaf, are broadly lanceolate to ovate with an obtuse tip and rounded to cuneate base.

Leaves of self-heal, medium green in color, may be 2 inches long and ¾ inch wide, or larger.  Margins may be entire (smooth) or have widely spaced hardly noticeable serrations and may be undulating.  Venation, recessed above and prominent below, is pinnate with a half-dozen or so secondary veins that are offset across the primary vein (midvein).  These secondary veins, extending from the primary vein, stop short of the leaf margin and fade out as they arch toward the leaf apex.  The recessed appearance of the primary vein continues down the petiole as a central groove.  Petioles may have thin wings that extend down from the leaf blade, with the wings more evident nearer the blade.

The uppermost pair of cauline leaves generally occurs immediately below the inflorescence, but a short stem segment may occur between the uppermost leaf pair and the inflorescence.  In the case of secondary stems, the uppermost pair of leaves are typically the only leaves on the stem, but occasionally another pair of leaves may be present.  Appearance of the uppermost leaf pair varies from plant to plant regarding shape of blade and petiole.  The blade outline may be similar to other cauline leaves or more linear and may be on a very short petiole or  sessile.  Alternatively, the “petiole” may be thin and widened so that its appearance is similar to that of the floral bracts (see below), with the blade size reduced and strongly linear.

The inflorescence is a rounded, cylindrical cluster at the tip of the stem, typically immediately above the final leaf pair.  Clusters have a loose, spongy feel.  Clusters, at the time of flowering, are about 1 inch long, but may be 2 inches long when flowering is completed.  Flowering occurs in late spring and lasts for about a month.  Flowers may bloom sequentially in tiers from lowermost to uppermost or flowers at anthesis may be scattered throughout the cluster.

Inflorescence clusters are composed of leafy floral bracts and flowers that are attached to a columnar peduncle.  Floral bracts occur in opposite pairs. Like the leaves, each pair is rotated 90 degrees from the pairs directly above and below it (decussate).  These cordate (heart-shaped) bracts may be up to ½ inch long and wide; they are sessile, ciliate (hairs on margins), tissue-thin, and light green with a darker green or purple rim.  Bract size decreases from the inflorescence base to the apex.  A whorl of six flowers occurs immediately above the floral bracts with fewer than six flowers per whorl near the top of the cluster.  Above the final whorl, several pairs of decreasingly-sized bracts create a flattened top.   When floral bracts have especially long pointed apices, the typically round cluster appears square. 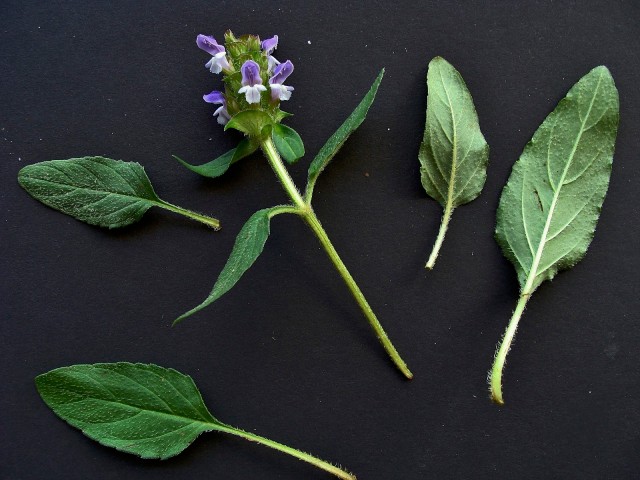 Photo 3:  Display showing upper and lower leaf surfaces along with a stem terminating with a flower cluster.  Leaves, stems and calyxes are pubescent. 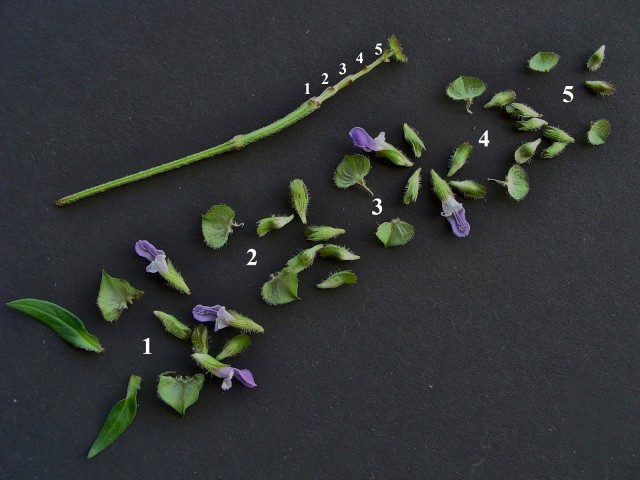 Photo 4:  Display of an expanded cluster alongside its stalk and axis.  Cluster had five whorls of flowers, each whorl sited above a pair of floral bracts.  Numbers with bracts correspond to numbers along stripped axis to show point of origin.

The tubular corollas are first seen as dark-colored nubs that appear from within calyxes.  A flower, about ¾ inch long from base of calyx to end of corolla, has an upper lobe and three smaller lower lobes.  Pedicels are very short.  The exterior of the upper lobe is typically purple (as first shown by nubs), while the lower lobes and the interior of the flower are a lighter color.  The four lobes join within the calyx to form a constricted floral tube.  The upper lobe, with a notched central ciliated ridge, is hump-backed above the notch toward the end of the lobe so that a hood (galea) is formed.  Rounded margins of upper lobes are flared upward.  Two oblong lateral lower lobes are projected forward while the larger middle lower lobe, with a broad fringed margin, bends down.

Flowers have four stamens (forked at top) that are adnate (fused) to the floral tube and a bifurcated style attached at the depression in the center of the deeply 4-lobed ovary.  The four stamens are forked near the tip, with a longer pair and a shorter pair, together with the stigma, positioned under the hood of the upper lip of the corolla. 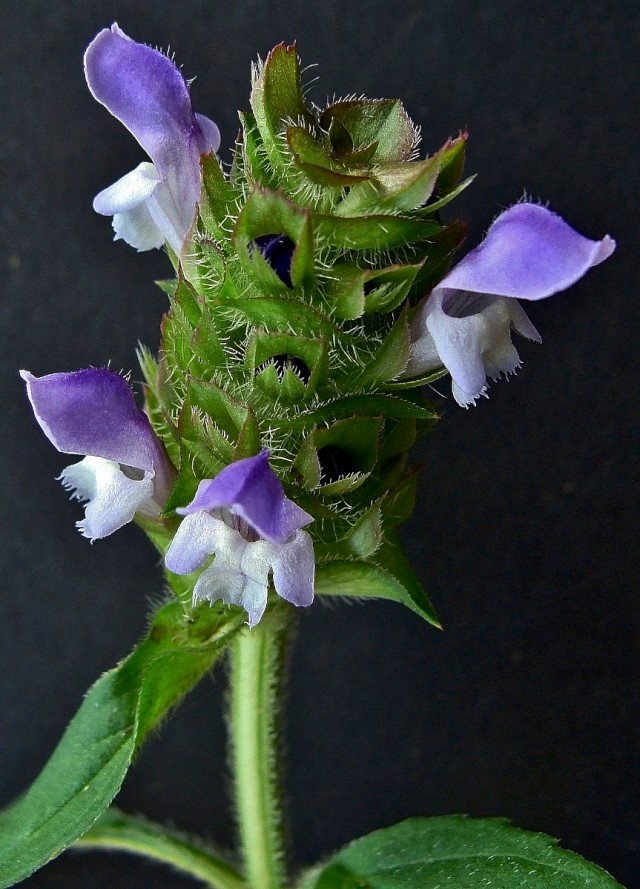 Photo 5:  Ciliated ridge of hump-backed upper corolla lobes and fringe on middle lower lobe can be seen.  Top of cluster is closed by floral bracts. 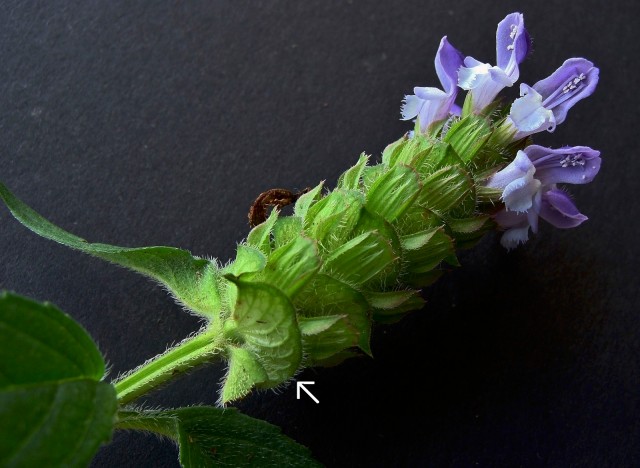 Self-heal is typically pubescent.  Stems are densely covered with stiff hairs (hispid) which continue along petioles and, to a lesser degree, onto leaf blades.  The lower leaf surface is more pubescent than the upper surface, especially along veins.  Sides of the upper calyx lobe are hispid while the dorsal surface is glabrous.  The lower calyx lobe is also hispid.

A fertilized ovary produces a brown cluster of four tiny, smooth, brown and egg-shaped nutlets that are retained in an upright position into late summer.  As rain drops strike the fruiting clusters, nutlets can be flipped out of the calyxes for dispersal by flowing water.

Photo 7:  In this early July photo, fruiting clusters have dried and stems are deteriorating.

Self-heal is a “pleasant-looking” small perennial that may work well in a moist sunny garden.  It has attractive leaves, flowers and flower clusters–good plant for bees and butterflies.  This native mint does not seem to spread aggressively by seed although it does spread by rhizomes.  If reseeding is an issue, bloomed-out flower clusters can be easily removed.  Flower clusters may be eaten by deer which would encourage an extended bloom period via lateral branching.  Being herbaceous (non-woody), the above-ground portion of this perennial plant disappears in winter.