Posted on December 6, 2017 by ANPS Webmaster

American holly (Ilex opaca var. opaca*) of the Holly (Aquifoliaceae) family is a broad-leaf evergreen tree frequently used for Christmas decorations. In the U.S., it occurs from Texas to Illinois east to Massachusetts and thence south and east to the Atlantic and Gulf Coasts. The genus name comes from scientific name for holm oak (Quercus ilex), which has broad evergreen leaves. The specific epithet “opaca” is a Latin word meaning dull or opaque (referring to the leaves), not glossy or transparent, in contrast to European species. In Arkansas, American holly is found throughout much of roughly the southeastern two-thirds of the state. In its native habitat it is found mainly in the understory of hardwoods and pines in moist, well-drained soils of rich lowlands, stream terraces, on northern slopes and along swamp margins. Other common names include Christmas holly, white holly (for its wood color), and evergreen holly.

American holly may reach 40 to 50 feet tall and, occasionally, taller**. Trees generally have a straight central trunk 1 to 3 feet in diameter, with several main branches in mid to upper portion. New spring branches, straight and slender, with minute short pubescence, are green at first, becoming light gray at the end of the growing season and, thereafter, a darker gray with lighter, often silvery blotches. With short, stout, stiff and crooked branches with similar growth rate along its entire height, trees are typically pyramidal with a rounded top. Young trees in full sun, which have branches to the ground, tend to be compact and densely branched while those in more shady settings have fewer branches and a more open structure. With age, lower portions of trunks becomes branch-free and upper branching becomes more open. Trunks have thin, gray bark that is usually smooth. Growth rate varies from slow to moderate, depending on habitat quality. American holly can survive Arkansas’s harshest winters, but does not survive fire or long-term soggy soils.

Photo 1: Thin bark may be smooth or rough. Trunk diameter of a young tree at left is 5 inches while diameter of tree on right is 1 foot 9 inches.

American holly has evergreen leaves that appear in early spring and drop off two springs later, about a month after new leaves have appeared. New spring leaves are a bronzy green that quickly changes to a medium green. Mature leaves have a slightly shiny upper dark green surface and a dull yellowish green lower surface. Leaves, alternate and elliptical in general outline, have thick stiff blades that range from 2 to 4 inches long and half as wide. Leaves bow-up from mid-rib to blade margins so that the blade is an elongated “bowl” (top convex and bottom concave), with a slightly billowy blade surface between secondary veins. The blade is stout enough that when the upper surface is pressed down, it springs back to its original shape. Blade margins typically have straight, sharp, stout, well-spaced, outward-pointing, sixteenth-inch, light-colored spines, along with an equally-sized spine at leaf apex. When spines are present, 3 to 6 pairs typically mirror across mid-rib. Narrowly revolute (turned under) leaf margins are wavy, when seen from above, with a spine tipping each wave. Bases of leaves are rounded to wedge-shaped. Petioles are relatively short at about ½ inch long on four-inch-long leaves. Upper mid-rib is boldly channeled and light colored while the mid-rib of lower surface is prominently exserted and light colored. Secondary, closely-spaced pinnate veins are obscure.

Photo 4: Female flowers typically grow singly on pedicels but in groups positioned mostly below terminal leaves of new twig growth. Infertile stamens are tipped with an infertile flange. Photo taken first of May. 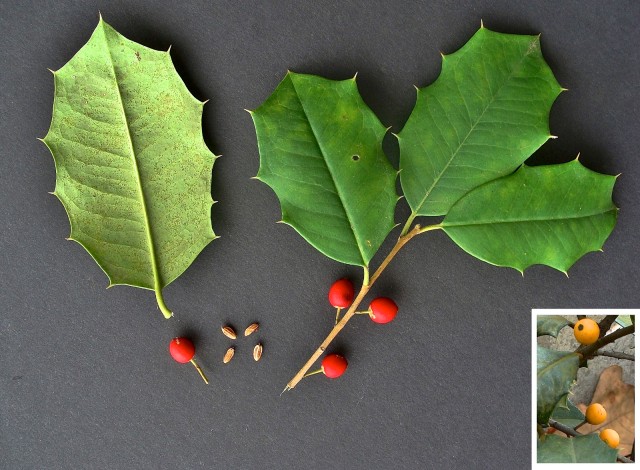 With its outstanding winter characteristics (green leaves and red fruit), American holly is often planted in the home landscape. When sufficient space allows for a large tree and its spiny leaves would not be a problem, the tree should be welcomed in a natural area or woodland garden. As broadleaf evergreens, both male and female trees are great winter accent plants, especially showy on a snowy day. Fruits are an important winter food for many song and game birds and small mammals. For a “clean” trunk, lower limbs may need to be removed.

** Arkansas’s Champion Tree, in White County, is 63 feet tall with a diameter of more than 4 feet.