Downy serviceberry (Amelanchier arborea) of the Rose (Rosaceae) family is a small tree or large shrub that produces showy white flowers very early in spring. The genus name likely originates from a common name of the type species of the genus, Amelanchier ovalis, a European species. The specific epithet translates to “tree-like”. Downy serviceberry is the most widespread species of the genus in North America, found throughout the eastern U.S. from Texas to Minnesota and thence east and south to the Atlantic and Gulf coasts. In Arkansas, where it is the only native Amelanchier, downy serviceberry occurs statewide except for lowlands of the Mississippi Alluvial Plain and West Gulf Coastal Plain. Other common names include common serviceberry, sarvisberry, sarvis, shadbush and Juneberry*.

Habitats of downy serviceberry include dry to mesic yet well-drained upland woodlands and forests, in full to partial sun light. It is especially common on ridgetops and rocky slopes. It often occurs as an understory tree among various hardwoods and pine. Downy serviceberry readily hybridizes with other Amelanchier species where ranges overlap.

Downy serviceberry, a deciduous tree to large shrub (referred to as “tree” herein), tends to have several trunks of varying size and, when younger, may sprout nearby suckers. Mature trees in full sun have a thickly branched, rounded crown, while those in shadier understories tend to be tall with irregular branching. An average size large tree is 15 to 25 feet tall (state champion tree is 44 feet tall). Branches tend to diverge from the parent branch at a sharp upward angle. Spring twigs, green and covered with long white hairs, grow from previous year’s brown to purplish, glabrous stems. Older twigs are smooth with white lenticels scattered about the ash-gray slender branches. Younger portions of trunks are smooth with splotches of grays and whites on a light gray background. Older trunks are a dark gray with shallow fissures.

Photo 1: Main trunks are furrowed while smaller trunk to right is smooth with splotches of lighter color. Lowest portion of central main trunk is 18 inches in circumference.

Overwintering buds are both apical and lateral. Apical buds, round in cross-section and with elongate pointed tips, are protected by 6 to 8 imbricated scales. With approaching spring, apices of interior scales grow to ½ inch so that they have brown bases and yellow-green to reddish tips. Lowermost scales remain brown and stubby at about ⅛ inch long. Interior scales have long hairs on their margins (ciliate). Scales fall off as spring growth emerges. Where buds include rudimentary stems and inflorescences, the inflorescences (attached to a mid-point of the new stem, opposite a leaf) emerge first, with the stem quickly following after flowers pass anthesis.

Inflorescences consist of ascending to drooping racemes, up to four inches long, bearing up to a dozen flowers on slender ¾- to 1½-inch-long pedicels; the longest pedicels are toward the raceme bases. The medium green peduncles and pedicels early-on are covered with long, dense, woolly (downy) white hairs. Each pedicel is subtended by a thin, lanceolate, wooly bract with an additional bract at mid-pedicel. These pedicellate bracts are colored in various shades of red and pink.

Photo 3: In mid-March, flowers of downy serviceberry are in bloom while nearby trees remain dormant. Before the advent of the exotic, invasive Callery pear, serviceberry was the first tree with showy flowers to bloom in the woods, earlier even than the wild plums.

Flowers have five strap-like to narrowly elliptical petals that at first form a tube, but then become reflexed. Petals are set in a light green to reddish, slightly woolly floral cup (hypanthium) rimmed with five prominent triangular sepals. These sepals at first support the petals when they are overlapped into a tube, but then sepals become fully reflexed as petals flare and also reflex. Petals, with rounded apexes and narrow bases, are well separated one from another with the triangular sepals positioned in between petals in star-like fashion. Flowers, 1 inch in diameter, have up to about 20 slender stamens with white filaments tipped with light yellow, knobby anthers that become brown as flowers pass anthesis. Stamens, exserted and radiating from flower center, surround four or more styles, also exserted, that connect to separate ovules within the hypanthium. Flowering extends over about seven days, depending on weather conditions. Trees in sunny sites produce more numerous flowers than those in shady understories.

Photo 4: Racemes of flowers that are approaching anthesis. Previous year’s stems are brown to purplish, while older stems are gray.

Photo 5: Pedicels, peduncles, margins of bud scales and pedicellate bracts are woolly. Bud at left shows that the inflorescence is fully developed before the stem (to which inflorescence is attached) becomes evident.

New leaves are borne on stems that develop from apical and lateral buds. When a bud produces both a stem and a raceme, the raceme is terminal on the new stem. Although flowering mostly precedes stem and leaf growth, by the time of peak bloom, early new leaves are readily apparent.

Leaves, on slender reddish petioles, are alternate and thin to papery. Leaves are simple, oval to obovate with finely serrated margins with serrations generally extending from the rounded to mostly slightly cordate bases to the acute to acuminate tips. The teeth are sharply pointed. Mature leaves and their petioles are about 4 inches long and 2 inches wide. Leaf blades remain roundly up-folded along the midvein. The upper blade surface is generally glabrous while the lower blade may be densely pubescent early-on, but becomes mostly glabrous later in the growing season. Petioles, ¾ to 1½ inches long, also lose their downy hairs with age. Mature leaves are dull medium green above and slightly paler below with pinnate veins that are a light green. Downy serviceberry has good fall color that varies from yellow-orange to reddish. A few dead leaves remain on branches into mid-winter.

With fertilization, the inferior ovary enlarges to produce the apple-like fruit, a pome. Fruits are topped by triangular sepals. In June, green pomes become reddish black at maturity with a diameter of ¼ to 3/8 inch. Pomes, a favorite food of many birds and mammals, enclose four or more tiny stones. 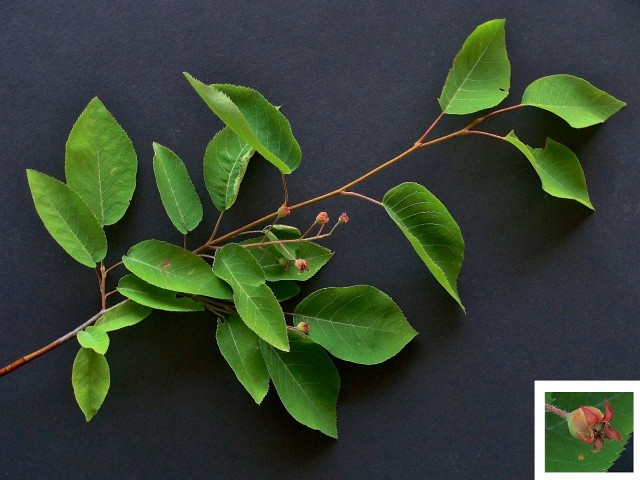 Photo 6: In early May, the fruit cluster is attached opposite a leaf on the lower portion of the new stem. Up-folded leaf blade along midrib, serrated margins and venation can be seen.

For a native plant garden or natural area, downy serviceberry’s adaptability to various sites and soils, structural appeal, early bloom, tidy leaves and nice fall color make it ideal where a small tree is desired. The tree provides interest in all seasons and its fruit is much loved by wildlife and people–however, the stones are rock-hard, so chew cautiously.

“Shadbush” (or “shadblow”) is a reference to shad (an eastern fish) that swim upstream around the time that serviceberry is in bloom.

“Juneberry” is a reference to fruit being ripe in June.