Wood nettle (Laportea canadensis) of the Nettle (Urticaceae) family is a perennial forb cloaked in needle-like, translucent, painfully stinging hairs. The genus name honors French naturalist Francois Laporte who studied the fauna of North America in the 1840s. The specific epithet refers to Canada, the locality from which Linnaeus’s type specimen was collected. In the U.S., the species occurs from Louisiana to Oklahoma to North Dakota and thence across the country to the Atlantic and Gulf coasts. In Arkansas, it occurs statewide except for portions of the Mississippi Alluvial and West Gulf Coastal Plains. Wood nettle occurs as an understory species in mesic to wet habitats with fertile soils associated with wooded seeps, riparian forests and bottomlands. It is also called stinging nettle*.

Wood nettle spreads freely in its preferred habitat from seeds and rhizomes so that large colonies may develop. In the spring, erect light green stems emerge that have alternate tissue-thin bracts on their lower six inches, below the leaves. The erect, unbranched, terete stems are slightly zigzagged from one leaf base to the next. Stems, remaining light green to medium green throughout the growing season, reach a height of 2 to 3 feet, with well-spaced leaves. The hollow hairs (trichomes) contain various chemicals which, upon touch, are injected into unwary hikers, producing a burning or itching sensation that lasts for 15 or more minutes. Blooming in mid-summer, wood nettle has staminate and pistillate flowers on the same plant (monoecious), borne in separate panicles to 4 inches long. 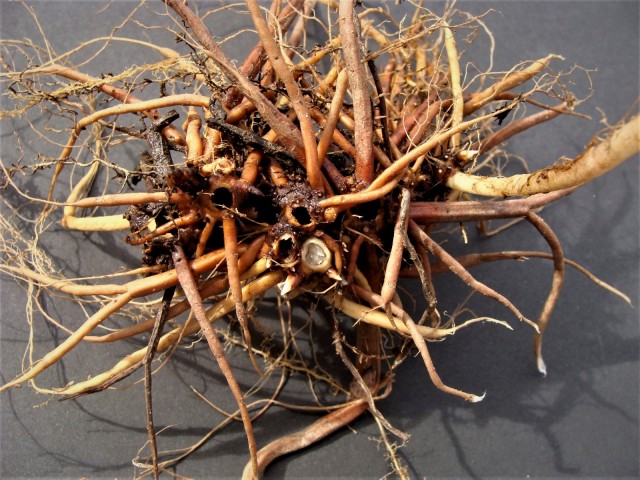 Photo 1: Clump (5 inches wide) includes several plants with intertwined roots. White pointed buds, for next growing season, can be seen at base of current-year stems. Round holes are scars from previous-year stems.

Leaves are alternate (other Arkansas nettles have opposite leaves). The simple leaves are up to 8 inches long, including the 2½-inch petiole, with the largest leaves occurring mid-stem. Leaves are ovate, to 3 inches broad. The upper leaf surface, slightly rugose at maturity, is a deep green, while the lower surface and petiole are light green. Leaf margins are coarsely serrate with triangular teeth, except for the rounded to weakly wedge-shaped base. Leaf tips are attenuate, longer than the lateral teeth. Venation is pinnate, with midvein, secondary and tertiary veins of the upper surface depressed and veins of the lower surface strongly expressed in round-relief. Long stinging hairs are scattered around the petiole as well as along principal veins of the lower surface. Scattered, stubby hairs are spread across the upper surface. Lower leaves tend to drop off as the growing season progresses. 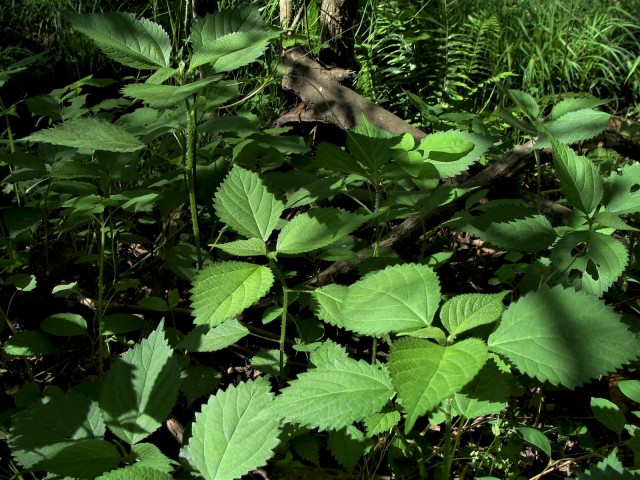 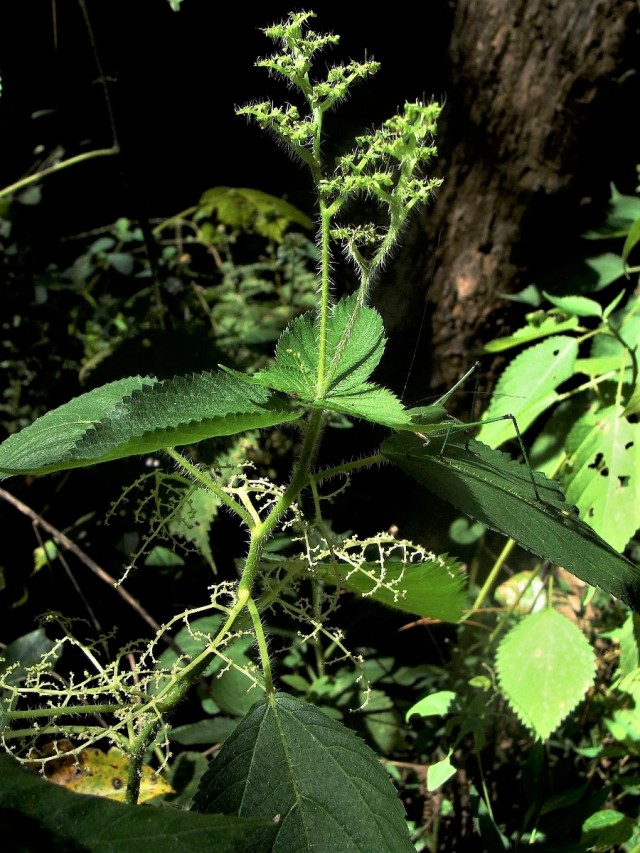 The pistillate flowers (without stamens), in one to several slightly zigzagged panicles, grow from the stem apex (where leaves are closely spaced) and, sometimes, from the next-lower one or two leaf axils. The panicles, erect early, become more horizontal as they mature. Panicles consist of a half-dozen or more straight secondary lateral cymes, set at about 55 degrees off the main axis, along with a terminal group of flowers. Lateral cymes are also set at about 55 degrees from their axis and alternate from side-to-side. Cymes consist of a series of short alternate peduncles, each of which has up to to eight or so tiny (1/16 inch wide) downward-facing flowers. Flowers attach to flat somewhat triangular flange-like pedicels that become more apparent as fruits mature. Flowers have two noticeable sepals positioned at opposite sides of the ovary. Ovaries are tipped by long slender styles which twist skyward so that pistillate panicles have a wispy appearance. The entire panicle is a light green and cloaked with stinging hairs. 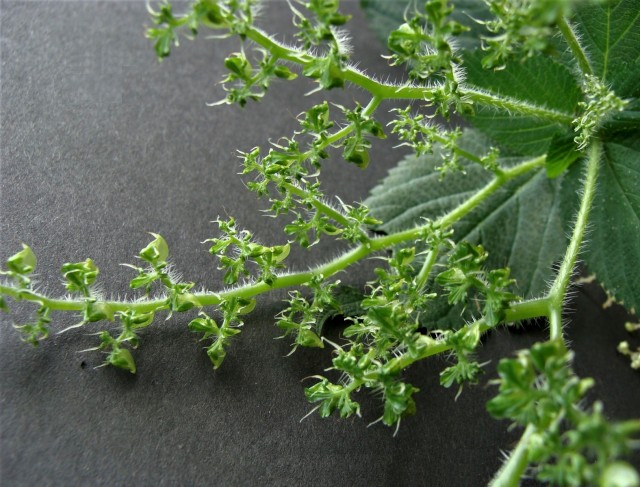 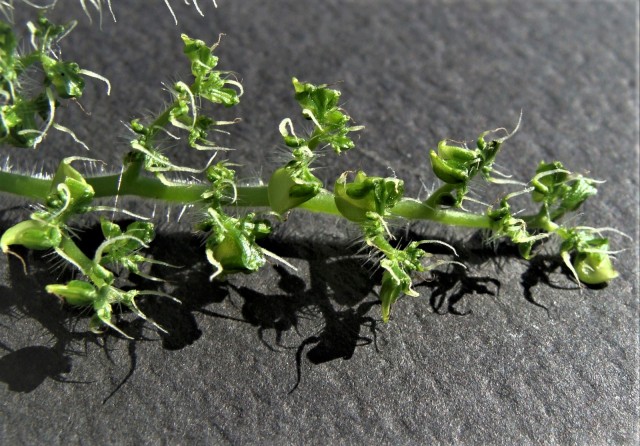 Below the female inflorescence, several leaves subtend the staminate flowers (without pistils). Structure of the staminate inflorescence is much like that of the pistillate inflorescence; however, staminate panicles are horizontal to drooping. Staminate panicles, extending out from the main stem to about the base of the leaf blades, are light green to whitish, with few stinging hairs. The tiny male flowers (⅛ inch corollas) face skyward. Flowers have five sepals (no petals) centered by five stamens and an infertile central column, actually a rudimentary ovary. They are light to whitish green with a dark green rib centered on each sepal. Stamens have white filaments and anthers that extend outside the corolla. Once pollen has been released, staminate panicles wither. 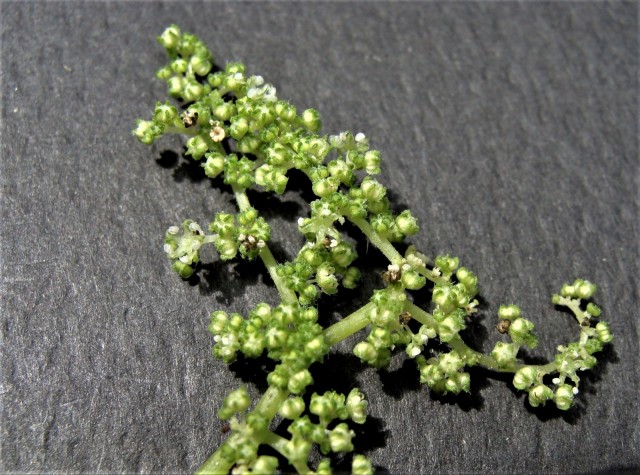 Photo 6: Display showing staminate panicle. As shown, only a few flowers are at anthesis. Flowers have sepals with dark green midribs and white filaments and anthers.

Pollination is by wind. With release of pollen, staminate panicles dry, and developing ovaries on the pistillate panicles quickly extend out from the closely hugging sepals. At first green, the fruit becomes a shiny black color. Mature fruits (achenes) are flattened, smooth and ovoid with thickened centers and two points. One point is where the style attached to the ovary while the other point is where the ovary’s base attached to the pedicel. As the plant fades in the fall, the achenes drop. 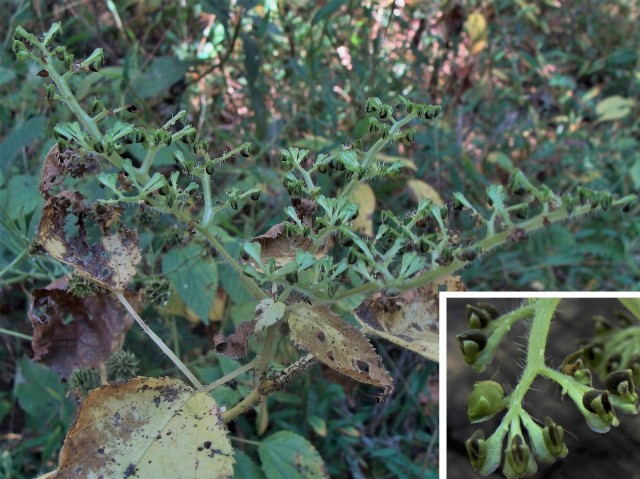 Wood nettle, although an interesting plant, would not be desirable for a garden due to its stinging hairs and propensity to spread widely in its preferred habitat. However, nettles are important host plants for butterflies such as the Question Mark and Red Admiral, along with a number of moths.