Heart-leaf skullcap (Scutellaria ovata*) of the Mint (Lamiaceae) family is one of 11 skullcaps** found in Arkansas that have blue to purple, two-lipped tubular flowers. Heart-leaf skullcap occurs from Texas and Minnesota east to the Gulf and Atlantic Coasts, as far north as Pennsylvania. In Arkansas, it occurs throughout much of the state except lowlands of the Mississippi Alluvial Plain and West Gulf Coastal Plain. The genus name is from Latin for “small dish,” alluding to the depression of the fruiting calyx. The specific epithet is Latin for “oval” in reference to shape of the floral bracts. “Skullcap” refers to the shape of the upper portion of the calyx, which drops off with fruit maturity. Preferred habitat is open woodlands with dry to mesic, rocky soils as well in more sunny disturbed places such as rights-of-way and logged areas.

This species is a non-woody perennial. Plants have fibrous white roots along with more conspicuous long, shallow, white, thread-like runners (underground stems) that have widely spaced, opposite pairs of tiny white bracts. Runners may extend a foot or more from the parent plant. Runners, which may be branched, produce white rhizomes at their ends with rhizomes in alignment with the runners. Rhizomes, to an inch or more long and ¼ inch or more in diameter, have the appearance of a series of connected knobs. Old rhizomes decay after the new year’s plants mature.

Perennial plants grow from previous year’s rhizomes, with each rhizome producing one to several square stems, typically 1 to 2½ feet tall. Plants early in the growing season tend to be erect while those with flowers and fruit become ascending to leaning. Stems generally are not branched below the terminal inflorescence. Stems, along with the entire plant other than the flowers, are medium green. New plants, developing rhizomes their first year, are produced from seeds.

Photo 2: Plants grow from tips of rhizomes which decay as plants mature. New roots grow from base of new stems.

Leaves occur in pairs (opposite), with each pair rotated 90 degrees (decussate) from the next pair. Leaf shape conforms with the common name in that they are heart-shaped (cordate), although lowermost leaves may be oval and leaves within the inflorescence subtending racemes (spikes) may be spade-shaped (as in a deck of cards). Larger leaves, along middle of stems, may have a blade that is three inches long and two inches wide on 1½-inch, slender, four-sided petioles. Leaf size decreases toward the inflorescence and size decreases further within the inflorescence. The leaf blade may be indented at its junction with the petiole or the indention may be absent, with the blade extending a short distance onto the petiole. The leaf blade is generally flat, but blades without the basal indention tend to be “drawn down” at the petiole. Leaves are a medium green above and a lighter medium green below. Margins have prominent, narrow to broad, triangular, ascending teeth (dentate margins). Teeth extend from near the petiole to a single large pointed “tooth” at the leaf apex. Leaves do not have a minty scent when crushed.

The primary vein (midrib), secondary and lesser veins are notably depressed above and expressed below. Most secondary veins, joining midrib at an acute angle, are offset pinnate, however the lowermost pair of secondary veins are opposite. Overall, venation produces a reticulated pattern that causes leaves to appear rough (rugose).

With few exceptions, plants are covered by dense, short, colorless, soft pubescence. Upper and lower leaf surfaces feel soft, the upper surface softer due to longer hairs. Pubescence also extends uniformly across the upper and lower surface of four-sided petioles, while the petioles’ lateral surfaces are mostly glabrous. Pubescence on exterior of flowers, floral rachises, bracts and calyxes is glandular.

Flowering, in late spring, is characterized by long, narrow, terminal and lateral racemes along uppermost portions of stems. Axillary racemes typically occur as matched pairs subtended by opposite leaves. Racemes, 4 to 6+ inches long, consist of up to 40+ flowers on short pedicels arranged in closely spaced decussate pairs, along with a single terminal flower. Each flower is subtended by a small, dish-shaped, sessile bract. Flowers of a raceme reach anthesis sequentially from base to apex. All racemes of a plant tend to develop simultaneously. 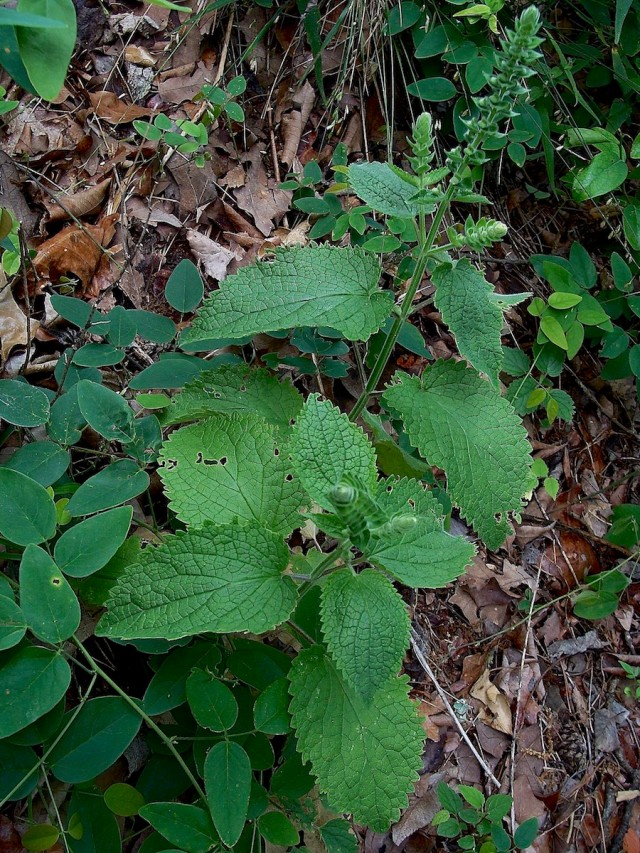 Lavender to purple corollas, to about 1 inch long, have a slender tubular lower portion that smoothly transitions to an expanded flared upper portion comprising a hooded upper lip and a broad, down-flared and ruffled lower lip. The face of the corolla is set at a right angle to the tubular lower portion. The tip of the upper lip has two small projecting lobes. The lower lip, larger than the upper, has an upper surface that is broadly rounded laterally and bowed up in its central ribbed portion. The lower lip has a white central zone with splotches of lavender or purple. It has an indented margin at its tip and toward the back in its side margin. As seen from the front, flowers have two orifices, namely, a small upper one formed by the upper lip and a larger lower one formed by both lips. 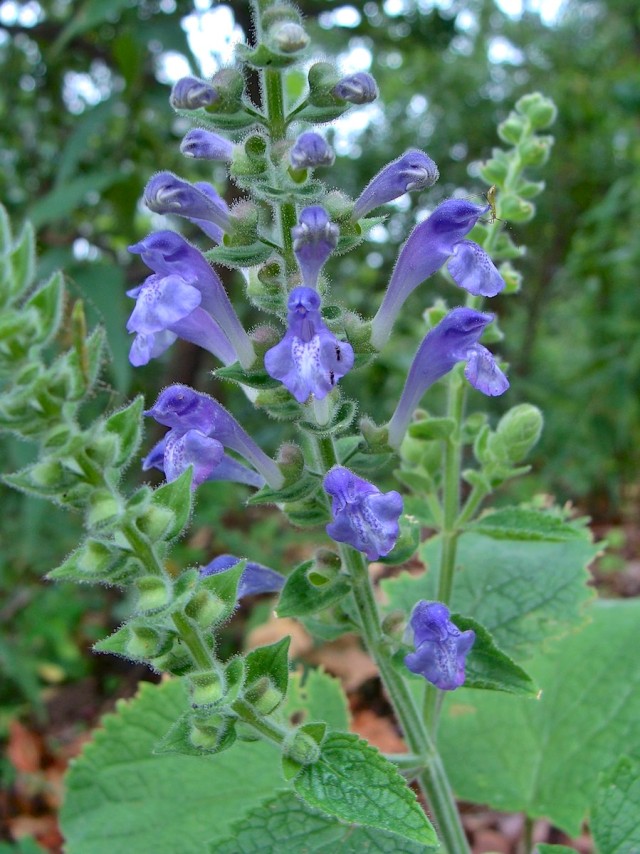 Photo 4: Opposite decussate pairs of flowers arch upward. Lower corolla lip has a central zone of white with blotches of lavender. Note glandular pubescence within the inflorescence. Photo late May.

Flowers have four stamens attached (adnate) to the lower portion of the corolla throat. The pistil comprises a deeply four-lobed ovary with a single style arising between the lobes. Lavender staminal filaments are tipped with two-lobed anthers that produce light yellow pollen. The style is white, with a small tapered stigma. Anthers and stigma are tightly positioned together just inside the small opening formed by the constricted upper lip.

Corollas emerge from short (1/8-inch-long), oddly shaped calyxes. These have a distinct saddle-like or helmet-like projection on the upper side of the tube. The lower side is more or less rounded. Calyxes, on 1/16-inch-long pedicels, are subtended by small, dish-shaped bracts of about the same length. Exterior calyx surfaces are mostly covered by short, dense, glandular pubescence.

Photo 5: Floral bract, corolla exterior and most of calyx are densely covered with glandular pubescence. Note lobes of upper and lower lips, including the two small lobes at tip of upper lip.

Ovaries have four round lobes (each with a single ovule), readily seen within the calyx after the corolla has fallen. With fertilization, lobes mature into 1/16-inch-wide, hard, rounded, one-seeded nutlets, each with two flattened sides and an “exterior” rounded surface. Nutlets are a dark purplish color, with tiny knobs covering the flattened sides. As nutlets mature, the calyx becomes light brown, its upper portion (the skullcap) drops off, and the nutlets fall from the saucer-like lower portion.

For gardening purposes, heart-leaf skullcap’s rugose and cordate leaves, fairly short stature and showy blue flowers are attractive in native woodland gardens and natural areas. Although the plant reproduces from rhizomes as well as seeds, excess plants can be easily removed in early spring to control numbers. This species does well in shady rocky sites. It is not a preferred deer food.

** Characteristics of heart-leaf skullcap that distinguish it from the other 10 skullcaps in the state: 1) cordate planar leaves, 2) white runners that produce white rhizomes, 3) lower lip mostly white with lavender to purple splotches, and 4) oval floral bracts that are about same length as calyxes.